One time, a liberal on her high horse told me that if my parents don’t make me happy then I should just walk away from them and not be under their thumb. Because apparently when your mom is a radical feminist who accepts the shit out of your queerness, it doesn’t make you privileged, it makes you an expert on the right way to be gay. Things are never black and white, and there is no point in pretending like there is no grey area between being enthusiastically supported and being told you are Satan’s spawn by our immediate and extended families. For those of us lucky enough to have family that we love, the intersection between family relationships, culture, the real world and the LGBTQ community is a big grey area that we stumble about year after year.

That grey area smacked me in the face, along with the rest of Real Life the moment I graduated from college and moved back in with my parents, where together we would no longer be able to ignore the fact that I am very much gay. I moved back in, despite all my reservations, because I had a plan. A plan for what needed to be done before attempting to storm grad schools, one that would let me make up for not figuring out what I want to do with life earlier. Unfortunately the financial aspect of this plan meant that I had to choose between living on my own or getting shit done while not dying of starvation. The cost and logistics of the classes I had to still take meant that I could only work part time. I had a family that was willing to let me live rent free, that came from a country where it’s very, very common for several generations to live in the same apartment, and that was VERY excited to have their only child around again (I wasn’t quite as thrilled but I digress). So I dutifully packed my entire dorm room into my Subaru Outback (insert obligatory crass lesbian trope joke here) and relocated it two hours north, to the middle of the woods. 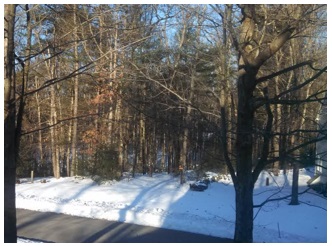 I am surrounded by more turkeys and deer than neighbors now.

I told myself that I can do this for a year, it’s for my own good and if anyone can iron out the complexities of me moving in as an adult, after four years apart, it’s my family.

You see, there are only three of us in the US. We are immigrants, and for fifteen years we clung to each other for support and fumbled about American culture together. That and the fact that I was never actually parented as a child meant that we have a strange relationship that doesn’t quite resemble that of a parent and child – it’s a little Gilmore Girls at times, a little tear-drenched-nuclear-holocaust-because-we-are-not-very-conflict-avoidant at others, and all in all we as a family tend to broach the kinds of uncomfortable subjects that most families sweep under the rug. So knowing all this I moved in and we became the Three Angry Russians, with a cat and a butch girlfriend who sometimes showed up to remind everyone with her presence that this is not a phase.

My Russian Experience, filled with grandma’s pirozhkis and love (left) vs what I get to see on the news during said pirozhki-eating experiences.

I am guessing you read the news, so you might have heard about Russia and how much it loves and embraces the LGBTQ community. Even though religion was straight up banned in the parts of Soviet Russia where I spent my childhood, there was always an abundance of conservatism and fiery Hellfire rhetoric, obviously disguised as pro-communist propaganda, but there nevertheless. Today the county is going through a bit of a religious revival, so we’re back to the more familiar rhetoric of using religion as an excuse to beat the living shit out of people.

This is where the grey area begins. Like Russia itself, my parents’ instincts are torn. My birth country can’t make up its mind whether it wants its culture to be a part of liberal Europe or conservative Asia, my birth parents can’t make up their minds between simply loving their only child and feeling like there is something fundamentally broken about me now. Some days they are supportive and amazing. Others not so much.

One year Russia lets a gay character have lots of screen time and some of the funniest jokes in our version of Ugly Betty, the most watched show in the entire country. I mean the man was a stereotypical flamboyant white male designer and his homosexuality was the butt of constant jokes, but he had a long term relationship that was talked about and there was a gay club that showed LOTS of gay people, and it was all there on national television. Yes, it made for absurd plotlines, but it was visible, and it was a big deal, and nobody said anything. Then a few years later there was the Pride Parade where everyone got their asses kicked, and a few years after that we have Sochi and the anti-gay laws. 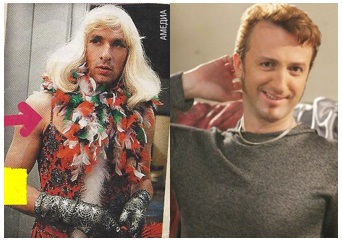 Like I said, my parents are the products of that culture. And I get it, I really get their confusion and their constant fretting that I may come out to the wrong person. I agree that it makes no sense to drop a bomb like this on my grandparents who are old, live across the ocean, and whom I see once every three years if that. I get that my parents had a heteronormative vision of their one and only little girl and then that version was shattered by all the embarrassingly butch girlfriends that kept appearing long after they stopped hoping that this was a passing phase. I get it all. I also get that sometimes my parents are just plain embarrassed, and there is no logic behind it, only ignorance. And that I don’t put up with.

Two and a half years after I came out to my mother, I went through a breakup and my own mother surprised me. She let me talk about it for hours, she said wise Mom things, she took me shopping. In fact, both my parents were supportive, respectful, didn’t make a single gay joke or wished unto me a boyfriend in the New Year. For a whole month after the breakup we were in full on Gilmore Girls mode, with lots of feelings shared, meaningful things discussed, my relationship actually validated instead of awkwardly glazed over.

But much like their Motherland, they couldn’t let progress happen without a backlash and on New Year’s Eve, as Times Square was counting down in the background, I was reminded of my place where my gayness will always be treated like a shameful secret in a toast. There it was, the “we love you but you have to understand you are dirty and we can’t tell people about you because it will make everyone implode if they know, and we can’t ever have grandchildren, and you should be grateful that this is how we treat you because you told us yourself that some parents beat and disown their gay kids” toast. Two and a half years later, two serious gay relationships later, after months of living in the same house as me and seeing how me being gay wasn’t a giant orgy colored with rainbow flags (props to you if that’s what being gay is to you, nothing wrong with that!), after a hundred honest conversations, fights, several promises that yes I can still have kids and I want kids, there it was – a backlash.

Sometimes when I tell people about this, they react the same way as the aforementioned liberal daughter of a radical feminist. They tell me that I should just move out, move on, and stop doing this to myself. I can just leave, they say, as if saying that will liberate me from some sort of prison. I mean yes, I can leave. I know people who have done it and were happier for it. But I choose to keep having this complicated private battle because for me it comes from a place of love and hope every bit as much as it does from a place of fear and ignorance. With my family it all comes tumbling out in a very un-American way – the sweet, the wise, the ugly, and the cruel. A big part of it is cultural, an even bigger part is our own clashing personalities. We can fight like there’s no tomorrow, mostly because we trust that there always will be a tomorrow for us. Some days I consider myself incredibly lucky for it – some families don’t get a chance to fight to understand one another. Other days I am just tired.

Sometimes that’s what families do, they try (and fail, and try again) to navigate each other’s flaws and misunderstandings, real or imagined. The issue of my sexuality doesn’t exist in a vacuum, it site there along with the ghost of Ex-Soviet Conservatism, next to the news of yet another act of violence against someone like me, along with my own pangs of internalized homophobia. and that’s my reality that I choose to live out, like many others who dance this complicated little dance.

Zhenia is a recent college graduate who studied science things (and English lit, go figure) and wants to be a wise Medical Person who helps All the Sick People, but in a holistic way. In her free time she likes to write about her thoughts and feelings, because she has too many and she will otherwise implode. Oh, and she sometimes trains cats to do tricks and it’s adorable.

Zhenia has written 1 article for us.