ANTI-GAY WHAT? Boston College Law Professor appears in anti-gay marriage ad: Apparently the legal consequences of our future marriage to Ellen Page would be so detrimental to our success in life that the world would probs explode. OK … so that isn’t exactly what Boston College Law Professor Scott Fitzgibbons said in his appearance in an anti-gay marriage ad, but he did declare, touting his academic merits, “legal experts predict a flood of lawsuits against individuals, small business, and religious groups. Church organizations could lose their tax exemption [and] homosexual marriage would be taught in public schools, whether their parents like it or not.”

Also, Fox wrote about this story as well.—but got the headline wrong. They either completely misread the article or just continue to love messing with their readers minds. We sense it was a mixture of both. 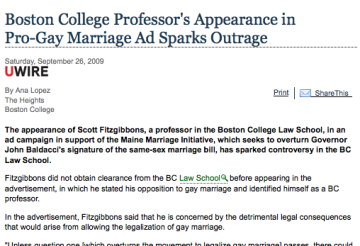 Many Boston College Law students and faculty alike are upset with Fitzgibbons for mentioning his association with the school in the ad—without any clearance from the college itself. Yay for the people at BC opposed to Fitzgibbons appearance in the anti-gay marriage ad. As for me, I’m still confused about these specific “legal consequences”. Fitzgibbons doesn’t go into detail about them in this article and merely suggests that he explains them somewhere within his letter to the Governor of Maine. PROBABLY BECAUSE THEY DON’T EXIST. (@uwire)

NO ON 1: C4ME Urges Support for NO On 1 To Protect Marriage Equality– 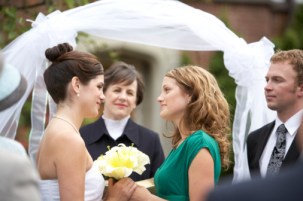 CHURCH: Forgive me father, for I have to bust up this monolithic myth: From the C4ME press release: “Marriage in the Catholic Church is a sacrament reserved to the Church to define and administer. Civil marriage is a right of the state to define and with it comes over 300 state benefits to better the lives of our families and children. No church can morally deprive families and children of state recognition.” (@goodasyou)

TAKE IT BACK: This weekend, social conservatives held a so-called “How to Take Back America Conference”:

And the description from People For The American Way– [shudder]
“Health care reform is about rationing, euthanasia, and pushing the elderly and vets off a cliff. The “radical homosexual activist movement” is the biggest threat to religious liberty, and ENDA is a bid to “criminalize Christianity.” (@rightwingwatch)