This week’s Extra! Extra! takes a look at the state of democracy, the use of the pandemic as an excuse for discrimination and harassment, climate change and more.

Republicans Tried to Suppress the Vote in Wisconsin. It Backfired

Natalie: Thanks to an influx of mail-in ballots, the results out of Wisconsin’s April 7th primary weren’t revealed until this week… and the response from the state’s voters were unanimous. Republicans sent their constituents to the polls in the middle of a pandemic — in cities where 180 voting precincts had been reduced to five — in hopes of stealing a seat on the state’s Supreme Court… and the voters responded with a startling rebuke. It was a lesson in accountability from Wisconsin’s voters and I hoped it (and the Texas decision expanding access to absentee ballots) would be a harbinger of things to come.

The Republicans in Kentucky seem to think differently… only a few days after seeing what happened in Wisconsin, they overrode the veto of the state’s Democratic governor and passed a suppressive Voter ID law. Even setting aside the fact that the voter ID purports to address a problem that doesn’t actually exist, the damn DMV is closed! How’s a person in Kentucky supposed to get a voter ID if the transportation department has closed the DMV? Maybe things will get back to “normal” before the election but even if they do (spoiler alert: they won’t) this barrier to voting is unjust and unconstitutional. This is absurd… and I hope Kentucky voters are as indignant about what they’re being forced to do as Wisconsin voters were.

We don’t know what the world is going to look like tomorrow…much less, seven months from now…but we have to start preparing for our worst case scenario. I’m encouraged by what we’re seeing in plans from Sens. Amy Klobuchar, Elizabeth Warren and Kamala Harris. I’m hopeful that we’ll see some progress towards finding one unifying voter protection bill in Congress soon.

Natalie: This situation in Hungary is my nightmare… my actual nightmare. The veneer of democracy is completely gone.

When COVID-19 Serves as a Cover for Discrimination

What ‘The New York Times’ Isn’t Telling You

‘No Blacks’: Evicted, Harassed and Targeted in China for Their Race amid Coronavirus

Rachel: One of the most horrifying things about widespread crisis is that in addition to the baseline damage it causes, it virtually always serves as a catalyst for heightened and targeted harm against already-marginalized groups — cultural “others” are villainized, and especially with a total breakdown in infrastructure or leadership, it’s so easy to use others’ fear and lack of support or recourse to prey on them. Reading all the stories this week about corporations getting bailouts in the millions while small businesses suffer, and the wealthy in urban centers who can afford to buy private tests from their concierge doctors while my aunt couldn’t get a test after her husband was killed by COVID, makes me think of the ultra-wealthy who have bunkers to wait out climate change while the global poor are the ones who will suffer from it most — anyways! I wish this was surprising!

Climate Change: Slowed Down for Now But Still Wreaking Havoc

Himani:If there were any doubt that fossil fuels, cars and capitalism are largely to blame for what’s destroying the planet, I think lockdowns the world over have quelled those. These are just a two examples of what happens when we reduce car traffic and emissions.

Animals are reclaiming the now-peaceful Yosemite Valley. This article is so surreal for me to read because as someone who spends quite a bit of time in NYC (not right now, but before), I think of places like Yosemite as a places of peace and nature. But as this article points out, even these preserved lands and national parks are usually overrun with humans and car traffic. One particularly striking passage:

“Tourists aren’t allowed in California’s most popular national park, but if they could visit, they might feel as if they had been transported to another time. Either to a previous era, before millions of people started motoring into the valley every year, or to a possible future one, where the artifacts of civilization remain, with fewer humans in the mix.”

And on the other side of the planet, India has clear skies the likes of which haven’t been seen in years. This is a BIG DEAL. This image from the CNN article linked above comparing the sky in India from November 3, 2019 and March 30, 2020 is a striking representation of how quickly a drastic enough change in our behavior can turn things around for the planet (and for us): 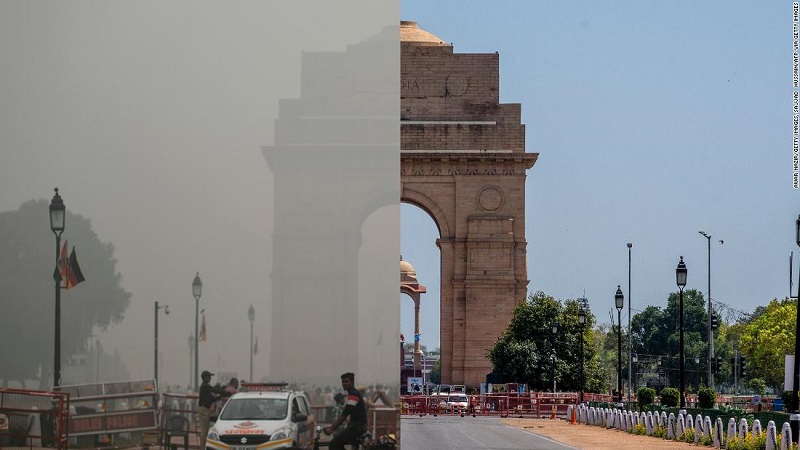 Yet this image alone, I think, can’t sufficiently capture just how bad air pollution is in India. Even just this past February (before the country implemented a nationwide lockdown and banned car traffic), India was making headlines for, once again, being home to a large number of cities with the worst air pollution worldwide. In 2017, breathing the Delhi air was described as, “like smoking 50 cigarettes a day” and airlines were canceling flights into the capital because visibility was that bad due to the smog. The air quality level was literally off the charts. In 2019, low visibility because of the smog led to a 25-vehicle pile up. Industrial pollution and car traffic are the primary contributors, coupled with an unforgiving geography.

Himani: And yet in spite of that, as we all know, there’s no turning back climate change. Back in February, we shared news about the first wave of locusts that were ravaging East Africa, destroying crops and vegetation and putting the food security of millions of people at risk. The locust swarms were a direct result of changing weather patterns due to climate change. The swarms are back for a second wave that experts fear will be even more devastating.

Meanwhile, Ukraine is experiencing wildfires near the Chernobyl site that “could throw up radioactive ash.” We’ve seen catastrophic wildfires all over the world in the past year, with the worst in Australia, again direct results of climate change.

Himani: The underlying question here is and always has been, will we change what we’re doing to slow down climate change? The pandemic has forced us to – temporarily. But with talks of reopening cities and economies, we’re faced with a choice of what direction to go. And we all know, the US is one of the worst offenders when it comes to contributing to worldwide pollution. The science-denying administration at the helm has been rolling back environmental protections, which has global implications. But here is a bit of uplifting news as courts and the states try to mitigate at least some of the damage.

Himani: This fascinating article is an excerpt from a book about Saudi Arabia’s global influence, which I knew very, very little about. We often talk about Western colonialism and global white supremacy, but as I read and travel more, I’ve begun to realize how incomplete that perspective is.

I am not, by any means, giving white supremacy and the West a pass for the devastation it has caused in so much of the world for centuries and continues to. You can point to pretty much any country outside of America, Canada and Europe and there will be at least one (and usually many, many more) instance of Westerners carelessly destroying thousands upon thousands of lives (and again, usually many, many more) for their own racist, selfish reasons. And let’s not forget the destruction they have and continued to impose on non-white people living within those Western countries.

And yet, I think we would be remiss to ignore the increasing global influence of non-Western countries like Saudia Arabia, China and India. These countries have their own issues of human rights violations, bigotry and ethnocentrism, and their growing global reach is accompanied by a spreading of that discrimination. I’m not making comparisons; I’m not saying “the West does this better.” I’m just saying “yes, and.”

In this particular situation, when I think about Saudia Arabia’s track record for women’s rights, LGBTQ+ rights and freedom of the press, I do have to wonder how those things have been carried over to the regions it has influenced. I also wonder what is lost when one culture and one interpretation of religion is imposed on another, as this article discusses.