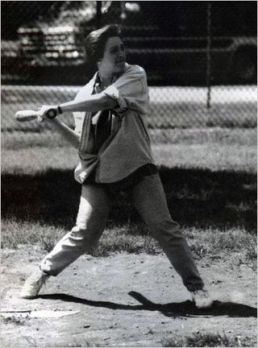 As we announced immediately ’cause we like to be on top of our shit, Elena Kagan has been nominated by Obama to the Supreme Court. The Huffington Post has their Big News Page on Elena Kagan so you can keep up on what people are saying about Kagan and her haircut.

At first, it seemed like this lady was totally on our side, and perhaps even pinged a bit. But of course, nothing is really ever THAT easy, is it?

Is Elena Kagan against gay marriage?

Salon.com reports that the conservatives are pretty darn sure that Kagan is pro gay marriage. What a coincidence, so are we!

Except this is NOM talking, and they are probably wrong: “NOM’s proof? The brief Kagan filed in support of the vile Defense of Marriage Act did not support NOM’s favorite patently ridiculous justification for the denial of marriage rights to LGBT couples: “that [heterosexual] unions uniquely protect children by encouraging responsible procreation.”

NOM is so terrible at logic, it’s almost funny. Just because she has a different justification for your position doesn’t mean she isn’t on your side, guys. But um, our delight at NOM looking stupid aside (Maggie: beggers can’t be choosers, c’mon), this is NOT GOOD NEWS FOR THE GAYS.

From AKA William’s fantastic roundup of Kagan’s big gay positions: “When Kagan was asked whether she believed that there is a constitutional right to same-sex marriage, she responded, “There is no federal constitutional right to same-sex marriage.” And there is all kinds of talk about what she really meant. And it really does come down to what the meaning of “is” is. Does this mean that the Olson/Boies challenge is now doomed? Maybe. But maybe not.”

And of course the gay rumors (is Elena Kaga a lesbian?) are the big giant elephant in the room. Although the rumors that Elena Kagan is a lesbian have been denied, it remains a hot button issue, regardless of what her actual orientation turns out to be.

Jezebel reported yesterday: “Her Personal Life Has Already Been A Target: From published rumors, strongly denied, that Kagan is a lesbian, to Internet abuse about her looks (comments here are just one example), Kagan has already been subject to severe sexism. On Google Trends this morning, “Elena Kagan husband” was #4; “Elena Kagan personal life” was #6.”

Of course, her position on gay civil rights matters much more than her sexuality. But what happens if we find out that she is in fact gay? Should all this denying temper our views of her?

The San Francisco Chronicle asks: Is it okay to be quietly gay? “Has the United States, and the queer community, reached a point where it’s okay for someone to say that his or her sexuality is none of anyone’s business?”

Andrew Sullivan thinks it is our business:

In a word, [the fact that no one will ask directly if it is true that she is gay and no one in the administration will tell us definitively] is preposterous – a function of liberal cowardice and conservative discomfort. It should mean nothing either way. Since the issue of this tiny minority – and the right of the huge majority to determine its rights and equality – is a live issue for the court in the next generation, and since it would be bizarre to argue that a Justice’s sexual orientation will not in some way affect his or her judgment of the issue, it is only logical that this question should be clarified.

Some other perspectives worth noting…

Did Dean Kagan refuse responsibility for a racist incident at Harvard?

On the environment at Harvard Law School during Kagan’s tenure: “When I was at HLS in 2006, there was a student-run but HLS-endorsed parody play featuring students and professors, in which individual students, mostly women of color, were roasted using highly offensive racial, gender and classist stereotypes–basically a modern day minstrel show. I was disgusted… Dean Elana Kagan refused to take a stand, stating that she could not take responsibility for the parody — even though she actually had an on-stage role in its performance.”

Their analysis shows that Kagan actually leaves a bit to be desired, as far as the left is concerned. The selection of Solicitor General Elena Kagan to be the nation’s 112th justice extends a quarter-century pattern in which Republican presidents generally install strong conservatives on the Supreme Court while Democratic presidents pick candidates who often disappoint their liberal base. Well, isn’t that a nice metaphor for American politics.

Biden Says Kagan is ‘Right’ to Oppose ‘Don’t Ask, Don’t Tell’: Joe Biden appeared on Good Morning America this morning to discuss Obama’s nominee Elena Kagan. He was asked about the Solomon Amendment and DADT. Said Biden: “She was right. …

Kagan would bring string of firsts to Supreme Court: Obama noted that neither Kagan’s mother nor father “lived to see this day, but I think her mother would relish this moment. I think she would relish, as I do, the prospect of three women taking their seat on the nation’s highest court for the first time in history … a court that would be more inclusive, more representative, more reflective of us as a people than ever before.”

Obama perpetuates discrimination with Kagan pick: This guy says that the Supreme Court discriminates in favor of Harvard, Yale, or Columbia graduates, as well as in favor of Jews and Catholics and therefore nominating her is against the American Dream.

Holding Court: What You Need to Know About Elena Kagan: She is widely seen as brilliant, questions have been raised about her record on diversity, liberals think she isn’t liberal enough, and Republicans at one point adored her.

A local chapter of Glenn Beck’s 9.12 project has succeeded in getting Revolutionary Voices, a collection of stories, poems and artwork by young homosexuals, banned from some schools in New Jersey. And thus begins another fight about free speech. (@guardian)

Faculty members have joined in on the protesting of the president of Marquette University, Father Robert Wild. The campaign to challenge Wild started last week after Marquette announced it was rescinding an offer to O’Brien, a lesbian whose research has included an examination of vignettes on gay and lesbian sex, to take the deanship. The faculty is considering a vote of no confidence in Wild. (@mjs)