It was everyone’s favorite comics-related holiday again this past week, Hourly Comics Day. This is a day every year where comic artists and laypeople alike draw short comics every hour on the hour — although the rules aren’t actually very strict, and it’s fine to skip some hours or do a slightly different format. Checking out the #hourlycomicday hashtag on Twitter is a great way to find a bunch of your favorite artists (as well as new ones you haven’t seen before!) giving you a little snapshot of their lives. It’s a really fun way to see what these artists’ styles look like when they’re more quickly and casually drawing. Let’s take a look at some of my favorites from this year.

I’ll start with a couple of Autostraddle favorites, Molly Ostertag and Kate Leth, both of whom made some of my favorite hourly comics this year. Both of them start with their cats and their partners, and I love it. Kate’s cat seems like she’s just as much of a diva as her owner. Also her relationship with her boyfriend is sometimes adorable but often times disgusting and terrifyingly kinky, especially when they watch TV and Kate reportedly says “Put the magic inside her, daddy.” Why, Kate, why? Molly, on the other hand, is here with that good, wholesome content. Instead of calling people Daddy and watching people eat things off the floor, Molly is busy feeding her pets fancy food and talking about memes at a bar. I guess she also watched The Shape of Water, so maybe her day was just as kinky after all. 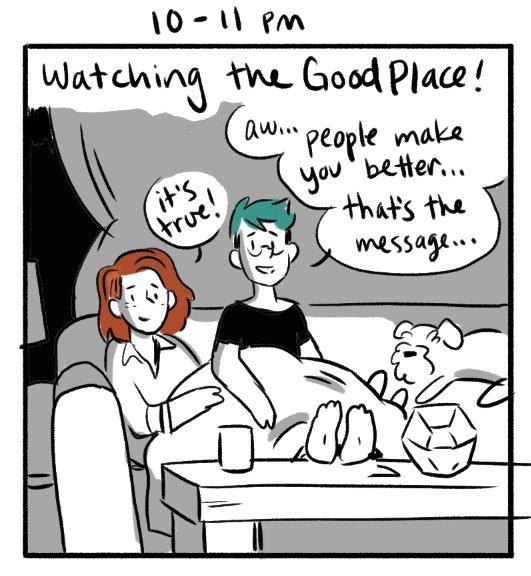 Some of my other favorites include Kate Sheridan, who started off the day playing Pokemon Snap. This was the first time they’ve played in about a decade, they said, and it feels like a soothing and comfortable return home. I love the way Sheridan draws herself in the world of the game. I love how they narrate their day in a really calming voice, as if you’re walking through nature and you don’t want to disturb the animals. I also really loved Noella Whitney’s comics, which were full of thick, dark lines, cats demanding food and hot dogs with relish. Another artist I really love, e. jackson, also started their day off drawing their cat. I really like these drawings a lot because they’re especially sketchy and gesture-y and they really get at the heart of drawing a quick comic once an hour on the hour. They did a really great job of capturing the sense of the moment without spending too much time making each comic perfect. I also love that their cat shows up in half of their hourlies and that their cat is named Kenny. 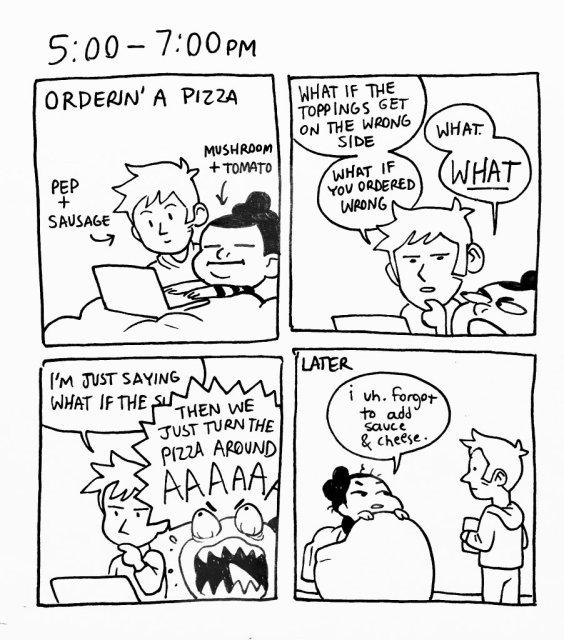 I’m also a big fan of the “Minneapolis Mads,” as Maddi Gonzalez and Madeline McGrane are commonly known. Maddi Gonzalez’s comics prominently feature hot cheetos, drawing comics, classic rock and pizza that somehow doesn’t have cheese or sauce. I really, really love the way Maddi draws herself in these comics, she’s able to make herself seem cartoonish, but also keep herself extremely cute. Her comics are a great reminder of how talented she is, especially at auto-bio comics. Madeline McGrane’s comics are wonderful in a different way. Her comics are otherworldly and atmospheric. At the end of them she says that she’s never really done journal or diary comics before, but she’s already so incredibly great at it. Something about her comics reminds me of seeing a Picasso in an art museum, but, like, if I liked Picasso.

The Prince & the Dressmaker