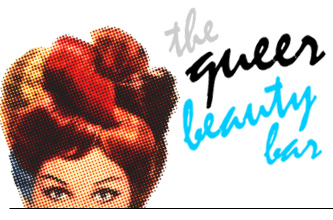 Contrary to popular belief, lots of hippies aren’t dirty. In fact, many of them smell pretty sweet, thank you very much.

I like to think that I smell positively floral. And a lot of that is thanks to my homemade deodorant. I’m gonna level with you here and let you know that the reason I initially switched to homemade deodorant (or any beauty products, really) wasn’t so much about my health as it was about a whole constellation of other things. Let me lay them out for you.

+ Cost: I find it really hard to part with my money when it comes to stupid things like toilet paper or tampons. Deodorant was just one more thing that I hated buying every month or so. But then buying the materials to make deodorant expensive too. $30 for a pound of cocoa butter? You’ve got to be kidding me. So I started with a cheap, easy recipe: coconut oil, arrowroot powder and baking soda. When I started making more of my own things, though, I started to realize that investing in raw materials wasn’t as expensive as I thought. Here’s let’s break it down:

And it lasts me 9 months. That is a thing that makes me very very happy.

+ Product: The real thing that drove me crazy about store-bought deodorant was how sticky it made me feel. I didn’t like that I had to scrub under my arms every time I took a shower and I didn’t like how I could literally shave it off my skin.

+ Consumerism: Call me a crazy anti-capitalist lesbian feminist, but I like when I don’t have to buy something that’s been researched and marketed to me. I like not putting money in the hands of giant companies. And yes, I know that Whole Foods is just another one of those companies that does things like base prices for their healthcare on discriminatory pseudoscience. You can’t win them all, you know? As soon as I can find cocoa butter somewhere else, I’ll be running in their general direction.

+ DIY nerdiness: In the words of Angry Chicken, I understand that there are plenty of people who would read this and say “why would I bother making that?” And to those people I say: I feel you. I have never in my life felt any need to knit or make my own pickles. But this is a thing I enjoy making!

This stuff works differently from traditional deodorant and, as such, takes a little getting used to. Because it doesn’t block your sweat glands, you won’t feel quite as dry as you’re used to and this can be a little unnerving. I’m happy to report, though, that I’ve gotten nothing but positive reviews from my friends who I made smell me and assure me that I didn’t stink.

Even though it doesn’t prevent you from sweating, the powder added will absorb moisture, meaning that you won’t soak through your shirt. And if you’re worried about the oils and butters in this stuff staining aforementioned shirt, don’t worry! As long as you let it soak in for 30 seconds or so, you’ll be fine. I’ve been using this for months now and I haven’t noticed any oily (or sweaty) marks in my clothes. 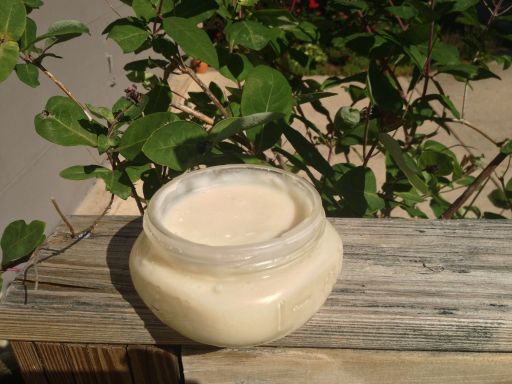 2 T of cocoa butter (melting point  100°F/38°C) Cocoa butter is moisturizing and, as an added bonus, smells like chocolate. It helps keep the delicate skin of your underarms soft and prevents razor burn and ingrown hairs. It’s also incredibly shelf-stable and stays good for anywhere from 2 to 5 years.

4 T of coconut oil (melting point 76°F/24°C) Besides being moisturizing, coconut oil is antibacterial and anti-fungal. Which makes it perfect for deodorant. It helps fight the bacteria in sweat that cause odor.

1 T of vitamin E oil (liquid at room temperature) Surprise! Vitamin E oil is moisturizing. It’s also an antioxidant, which is great if you understand what that means. I don’t, but I like how the oil feels on my skin.

15 drops of essential oil (liquid at room temperature) Essential oils add a scent to your deodorant and, depending on which ones you choose, can also help fight bacteria. Lavender, tea tree, lemon, peppermint, grapefruit and rosemary are good choices because they’re antibacterial, antifungal and antiviral. Just a word to the wise if you’ll be exposing your underarms to the sun: citrus essential oils are photosensitive. Don’t use lemon or grapefruit (or orange, tangerine, lime, etc.) if you’ll be sunbathing as they’ll make your skin burn faster.

8 T of  arrowroot starch or corn starch (solid, obvs. but just for fun: melting point 329°F/165°C) Arrowroot starch absorbs moisture and helps keep you less sweaty. If you’re concerned about GMOs or don’t like supporting the corn industry, arrowroot starch is a good alternative to corn starch, which does pretty much the exact same thing.

[7 T of bentonite clay:  Bentonite clay is a weird, semi-magical substance that makes sure any possible smells stay away. A word to the wise: don’t store your deodorant in a metal container or stir it with a metal spoon if you use bentonite clay. I didn’t heed the warnings that somethingsomethingchargessomethingmetal and couldn’t figure out why I smelled so much worse when I travelled than when I was at home. After a little reading, I discovered that the metal travel container I stored my deodorant in was deactivating the bentonite clay.

[7 T of sodium bicarbonate/baking soda: Baking soda absorbs odors and moisture. I used it in my first batch of deodorant but found it to be incredibly abrasive. The skin under my arms turned red and it looked like I got some kind of weird sunburn that only affected my armpits*. Avoid this if you think your skin might be affected my it.]

Optional: 1 T of beeswax (melting point 146°F/63°C) If you live somewhere that’s incredibly hot or if you just want a more solid final product, add a little besswax. It won’t do much for your body, but it will help the deodorant set up. If you don’t want to use beeswax but still want the benefits, try carnuba or candelilla wax.

1. Sterilize your container. If it’s plastic, just wash it in really hot water. If it’s glass, boil it or run it through the dish washer. Pro tip: if you’re using a mason jar, either find 1 piece lids (good luck, I keep failing miserably) or hot glue that shit together. Otherwise you’re going to be annoyed every single time you go to open this stuff and have to lift off the disc part of the lid and end up getting goo all over your hands and your countertops. I speak from experience so just trust me here.

2. Set up a double boiler situation by placing a pyrex measuring cup or really any glass thing with a handle in a pot full of hot water. If you put a washcloth below the cup, it won’t jingle so I’d recommend doing that. Alternatively – if you’re not a massive hippy who care about things like potentially zapping the magic powers of cocoa butter – you can just melt everything in the microwave.

3. Measure out the cocoa butter, shea butter and coconut oil and stir them together while they melt.

4. Once they’re all melted, add the vitamin e and essential oil.

5. Pour it into your container, screw the lid on and put it in the fridge to harden. The consistency of the deodorant will depend on where you live, what season it is, if you have heating or air conditioning and how much sunlight it gets. I’d recommend keeping it out of direct sunlight to discourage anything exciting and disgusting from growing in there. If you live somewhere really hot and don’t want to use beeswax, you can even keep it in the fridge so that it feels cool and refreshing when it use it. It’ll melt on your fingertips and you’ll be able to spread it on. 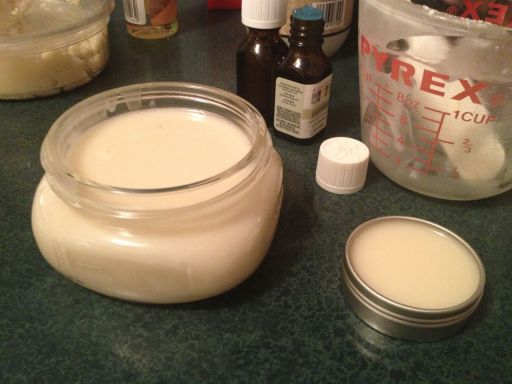 6. Use it. You’re going to have to get a little friendlier with your underarms than you might have been in the past since you’ve got to rub it on, but this is actually a good thing because it means that the moisture gets fully rubbed in (meaning your skin gets all its benefits and your clothes won’t get stained) and that you won’t end up with little white lumps nestled in the folds of your skin half way through the day.