Happy Fall! It’s eighty degrees and humid in Boston as I’m typing this and the world is terrible. All I really want is to be able to comfortably wear my denim jacket and a beanie because they somehow make me feel like a Ninja Turtle and I could use the added toughness right about now.

Since it’s too warm to go armoring myself in denim and wool, I have been working a lot and watching all of the original Will and Grace even though I’m pretty sure it’s terrible. I’ve installed and subsequently deleted a dozen different games on my phone. I became completely obsessed with an indie game called Heat Signature for two days and then forgot to ever play it again (but it’s very good, like a mix of FTL and Party Hard.) And then finally I realized that the thing I need is a big giant world to immerse myself in. A world that is definitely not this one.

Enter Divinity: Original Sin 2. It’s been available in early access for a year or so, but was finally released in full on September 14th. As the name suggests, it is a sequel. The first one came out in 2014 and I played it for thirty hours and liked a lot of things about it but then I quit because of either something about the game or something about my attention span. Guess we’ll never know. But I’m twenty five hours into the sequel now and a character just told me “You’re at the beginning of a long adventure!” so I guess I should expect to be playing this one for more than thirty hours. 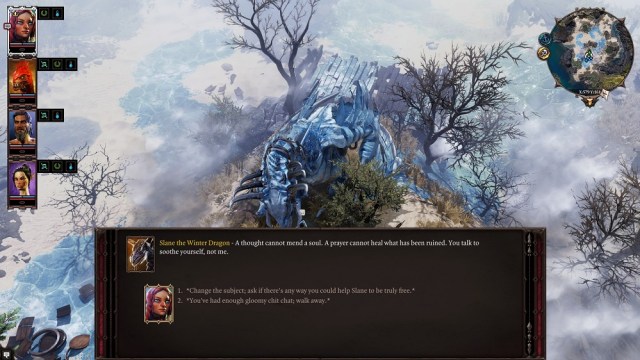 Okay listen I am here for escapism, Buddy.

Like its predecessor, D:OS 2 is an old fashioned, turn based, RPG. If you played the original Fallout games, it’s like that, except in a fantasy setting, and, like, way harder. And with a lot more freedom. The thing this game is trying to accomplish is to replicate the open experience of a tabletop game as closely as possible in a scripted game. You can play it co-op with friends in a squad of up to four players, which sounds like fun and also like absolute mayhem, but mostly impossible to ever schedule often enough to get very far into the game. But I guess if people can get three friends together for Destiny 2 or PLAYERUNKNOWN”S BATTLEGROUNDS every other night, this should be just as possible. There’s also a Game Master mode that I haven’t tried that I guess lets you set up your own stories for your friends to play? That, again, sounds really cool, but also like something I will never get around to messing with.

In games, as in life, I’m a creepy loner who doesn’t want to deal with real human beings. So I started up the game alone and I’m having a very good time with it. The story is about some kind of fantasy thing that you don’t really find out even the first thing about until at least fifteen hours into the game, so I don’t want to spoil it.. I’m pretty sure that in the first game, the protagonist was a Source Hunter, which is kind of like an Auror, maybe? But in this game, you play as a Sourcerer, which is a witch/wizard, but extra powerful, and, we’re told over and over again, extra dangerous. You start out on a boat where you’ve been kidnapped by Magisters (nerds in robes) who want to “cure” you of your Sourcery. Which, like, whoa there. This is not Good Guy rhetoric.

But anyway, then a witch who is Not Flemeth From Dragon Age (and therefore, alas, not voiced by Kate Mulgrew) just pops in and does a big Source thing and the boat gets eaten by sea monsters. You wash up on shore with help from a mysterious something only to find you’ve made it to where the Magisters were taking you anyway, and it’s all very bleak. I picked up a few companions around town, and made friends with a cat, but then the guards shot my cat because it was bad luck? And then later on when I was strong enough to seek revenge on the guards who shot my cat, they kept firing arrows into its corpse that would ricochet and hit everybody in my party. 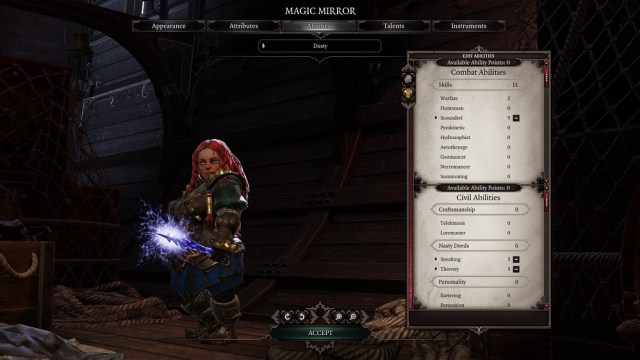 I named her after my first cat.

In the character creator, there are a whole mess of presets complete with backstories you can choose, or you can start from scratch, which obviously I did because who ever wants to play as a preset? (All of the presets wind up being recruitable companions in the game anyway, so you aren’t missing out on anything by not playing as one.) I’m playing as a lady dwarf named Dusty who flirts with half the things and stabs the other half. I am an outlaw and a scholar. They even let you choose which instrument takes the lead in your theme music! I went with cello. I have beautiful red braids and a cute little walk, and I am mostly very happy with my choices. Then about an hour into the game I remembered that rogue is a really tough class to play in these games because everything in the world explodes, and I began to have regrets. But I have resisted the urge to restart the game, and, at level 9, Dusty is finally pretty good at murdering people while standing in the raging fire that inevitably winds up enveloping the entire battlefield.

Combat is all about mastering the elements. You can spill oil on the ground to slow people down, but it’ll slow you down too if you’re standing on it. Also, if anybody does any fire magic near it, everything will very quickly be on fire. There’s also poison ooze and poison gas, that will, you’ve probably guessed, poison you. But it will also explode if you add fire. Cast a rain spell to put out the fire, but then the air is full of steam that can be electrocuted or frozen. Same with blood. Don’t bleed. Or do bleed, strategically. There are a million ways to mess up every fight, and I manage to do a lot of them a lot of the time. There are also a million ways to plan ahead and set the odds in your favor. I’m slowly picking some of those up. 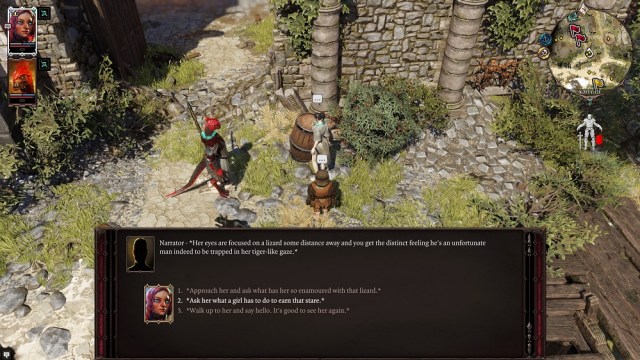 This game is not about flirting I promise.

The fighting is really really good in this game. But it’s really not a very fight-heavy game. There are usually a handful of ways you can approach a situation, many of which don’t require any violence at all. I’m feeling the opposite about this game that I usually do with rpgs, where the first few hours is excitement about having this whole new thing to explore and then the next eighty hours is about becoming as powerful as a God. In this game, the further into it I get, the more excited I am for the next thing. Every encounter feels specific and unique. Today, I ran into a fight I just couldn’t beat, that was necessary for a story mission. I tried everything I could think of to sneak attack and stop them from calling in reinforcements, to no avail. But then I remembered I could try talking to them, and bribed my way through the encounter for a sum that the game acknowledged was comically cheap. I also resisted the thrall of a spooky scarecrow, employed a phishing scam to talk my way through an enchanted door, rescued a chicken’s beloved egg from demons, and lured a rat with food so it would sit still long enough for a turtle to confess her love to it. 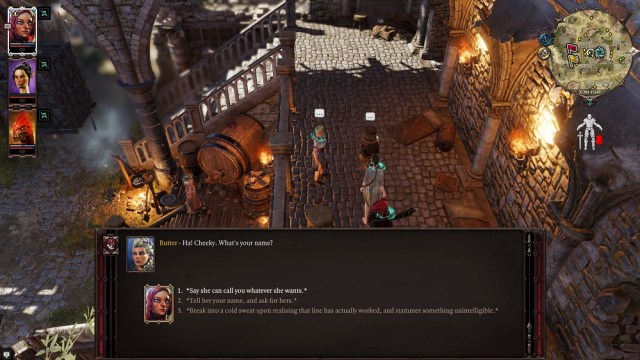 No it is not about flirting and yes I am wearing a bucket on my head.

And speaking of love, I’ve found three people to get a solid flirt with. The first was a woman named Butter, who kind of seemed like a waitress even though there was no restaurant. She recommended I tone down the charms, but she also told me to look her up in a town called something or other when my adventures are done. That could possibly just be an ambush or some other bamboozle, but for now I am calling this one a win. The second lady I flirted with was a witch in a cave who was standing over a corpse with a bouquet of roses. This flirt led to a big old smooch, but the smooch was full of bugs, and then she tried to murder me so I reloaded the game and pickpocketed a dragon’s soul from her inventory. Let’s call that a draw. Finally, there’s my companion Sebille, with whom I have a lot in common. Namely we both love to murder. When I first flirted with her she threatened to kill me, but eventually she joined my party. And once I convinced her that I am fully supportive of her mission of vengeance, she really started to come around. She even let me prick my finger on the needle she uses for killing people. It was a big moment for us. Apparently this game does have full romances in it, so I see a long and bloody future ahead for Dusty and Sebille, and I am very curious to see whether there will be nudity. 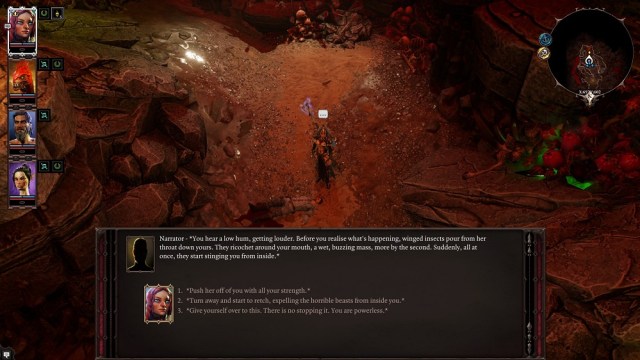 I told you it’s not about flirting.

There are some things I don’t love about the game. The quest tracking is completely useless, just notes that tell you so-and-so said such-and-such but rarely ever tell you where to go or what to do. I mostly don’t bother to look at it. The way the mini map works just doesn’t work with my brain; the orientation shifts based on where your camera is facing instead of just holding a static north/south, and I get lost more than I reasonably should. Also, holding “alt” only highlights loot, not corpses or lootable containers. It can be really hard to find the things I’ve killed after I’ve killed them, and since I killed them, naturally I deserve to take their stuff. 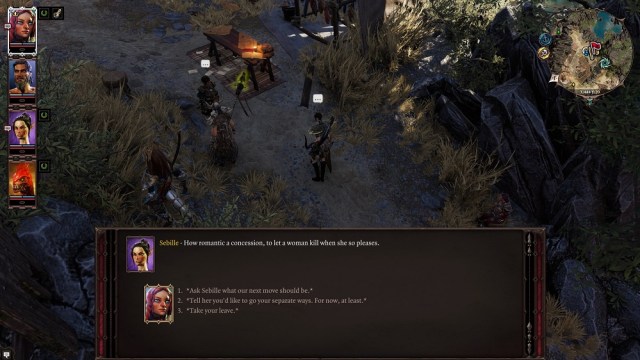 But maybe it is about love.

But these are just quibbles. The game is gorgeous. The writing and voice acting are legitimately great. It’s just endlessly surprising. It has all the heart of an old school rpg with the scope and polish of a modern game. Right now it’s only available for Windows ($44.95 on Steam, absolutely worth that price in my opinion). I don’t know if there are plans for a console release, but the first game did make its way to consoles eventually so it seems like a reasonable possibility. Pick it up if you get a chance. And keep your cat away from the guards.