About a year ago I played and liked and wrote about Dishonored 2, a game full of satisfying and creative ways to murder people that it eventually turned out I was not especially supposed to murder. It was great! I loved it! I ushered the world into tyranny because I was both an empress and a chaotic murder machine, but you know, it’s really more about the journey than the destination. And so I am very pumped to be back again doing crimes in this plague-ridden steampunk world with the newest installment, Dishonored: Death of the Outsider.

The main reason I was excited for this game is that Arkane Studios has been knocking it out of the park lately with their protagonists. Just a triple-A studio making big budget games casually with queer lady protagonists like it’s the easiest thing in the world. None of these games have been about romance at all, and most of the information about the characters’ love lives is only obvious if you read all of the in-game notes and lore, but it’s there! Dishonored 2 featured Emily Kaldwin, who has a nonbinary love interest somewhere out there. Prey featured an Asian protagonist, which is rare enough itself in western games, and if you chose to play as a woman you had a canonical relationship with a woman on the ship. And now in Death of the Outsider, you play as black bisexual assassin Billie Lurk. She has a dead girlfriend who taught her how to talk to rats! If that’s not queer culture I don’t know what is. 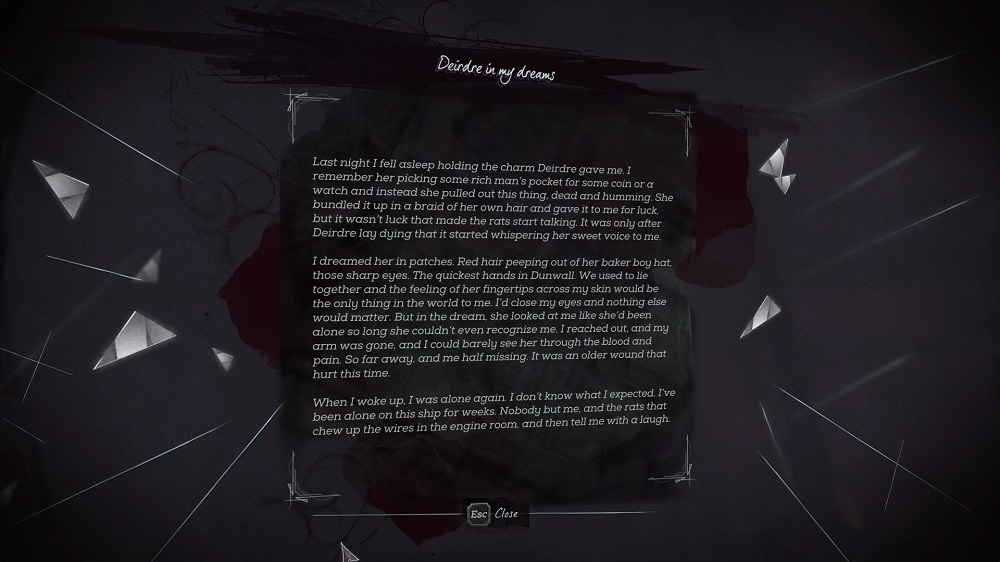 You might remember Billie Lurk from the DLC to the first Dishonored game. I sure don’t, because I didn’t play that game. I do remember her from Dishonored 2, where she spent most of the game under the alias of Sea Captain Meagan Foster. I am happy to report that she is still voiced by everybody’s crush Rosario Dawson.

I’m gonna tell you right now that I liked this game a lot, I even finished the whole entire thing which is pretty rare for me and my attention span, but I really don’t know what was happening in it or why. The game picks up after the events of Dishonored 2, and Billie is like “Well, I helped put the Empress back on the throne and she didn’t execute me for being buddies with the guy who assassinated her mother. Hey, wonder what ever happened to him?” So she goes on a mission to rescue her old murder mentor Daud, and that takes about five minutes, and then he’s like “I tell you what. Let’s murder that Jim Caviezel looking God-Boy who gave us all magic powers. And I’ll tell you why. Just Kidding. I will never tell you why.” And that’s pretty much your plot right there. Of course it’s never as simple as all that, there’s a cult and an opera singer and a very satisfying bank heist, and a lot of mayhem to cause along the way. 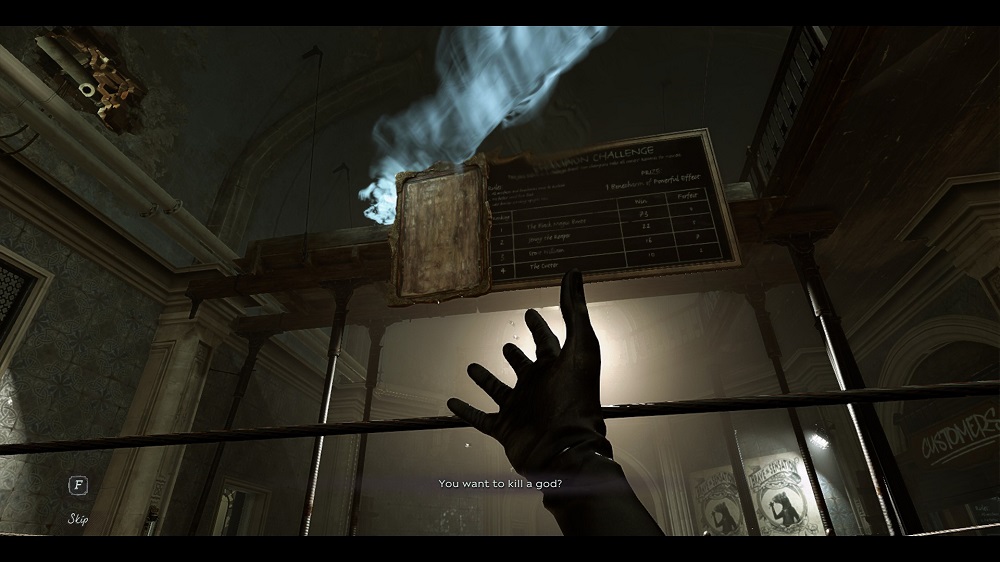 This game was originally imagined as a DLC expansion to Dishonored 2, but they eventually decided to release it as a standalone game at about half the price of the last game ($29.99.) There’s definitely enough to this game to justify the price, and it mostly stands up on it’s own. I read that it supposedly has between three and ten hours of content, depending on your playstyle, but it took me more than 9 hours and I was nowhere near completionist with it, so the idea of anybody beating in it three hours seems insane to me.

Some things I didn’t like were that the game didn’t import a save from Dishonored 2, so I was pretty confused about newspapers saying Emily Kaldwin is A Very Good Empress and also why does Billie Lurk have both of her eyes and arms? And it doesn’t explain your weapons to you right away, I just had a knife (pretty self explanatory) and a couple shooty things (easy enough to figure out after shooting some people). But then you get a couple different kinds of mines that they don’t explain until you’ve had them a while, and which are not easy to tell apart when you’ve never used them. And I eventually was picking up tons of grenades but there was never a slot for them on my ability bar and I could not figure out how to use them. And grenades would have seriously come in handy. And, like, I play a lot of video games. It is not very often that I straight up cannot figure out how to use my items. I’m sure there was an easy way to do it, but whatever it was, it wasn’t intuitive. It felt like it expected you to carry over your knowledge directly from the last game, but this is a standalone game released an entire year later. Help me out a bit, you know? (Also, and this isn’t really about this game so much as games in general, can you stop forcing me to kill dogs? Why do the bad guys always have dogs? Give ME the dogs, so I can be nice to them.) 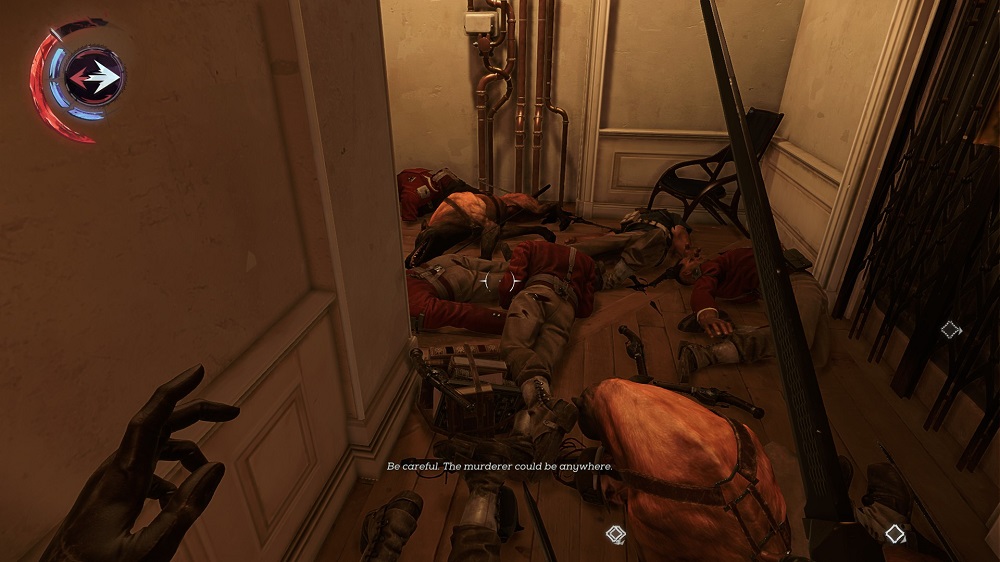 The murderer could be anywhere, you guys.

Also sometimes it felt like the game just didn’t work. Like I would try to be merciful and creep up behind people to put them to sleep instead of killing them, and sometimes it just wouldn’t let me do that. And the final level introduces new enemies that either I killed very quickly without any trouble, or they one shot killed me somehow that I still don’t understand because the game never really explained them to me and the fights were over (one way or another) too quickly for me to ever figure it out.

In other ways, though, this installment was super successful and more enjoyable even than the last one. The levels are smaller and tighter, and that makes it easier to approach them like a puzzle. I still failed marvelously at stealthing my way through them, but I had a much easier time envisioning how to approach them. Instead of getting overwhelmed and running in with my sword out like in the last game, I would come up with a plan, execute it mostly pretty well, then screw up and wind up having to murder everybody anyway. But it was progress, I’m telling you. The smaller levels also make the game feel more replayable. Nothing was big enough to be a chore, and finding out all the things I had missed at the end of each mission made me seriously consider replaying a few of them. I also like how you get most of your abilities right at the beginning, so you can mess around with different playstyles right away. And I liked that your mana regenerates automatically, so you can magic yourself around at will and not have to worry about finding potions to refill your energy. It gives you a lot more freedom. And I also appreciated the abbreviated length of the game, because I actually finished it before I could get distracted by other things. 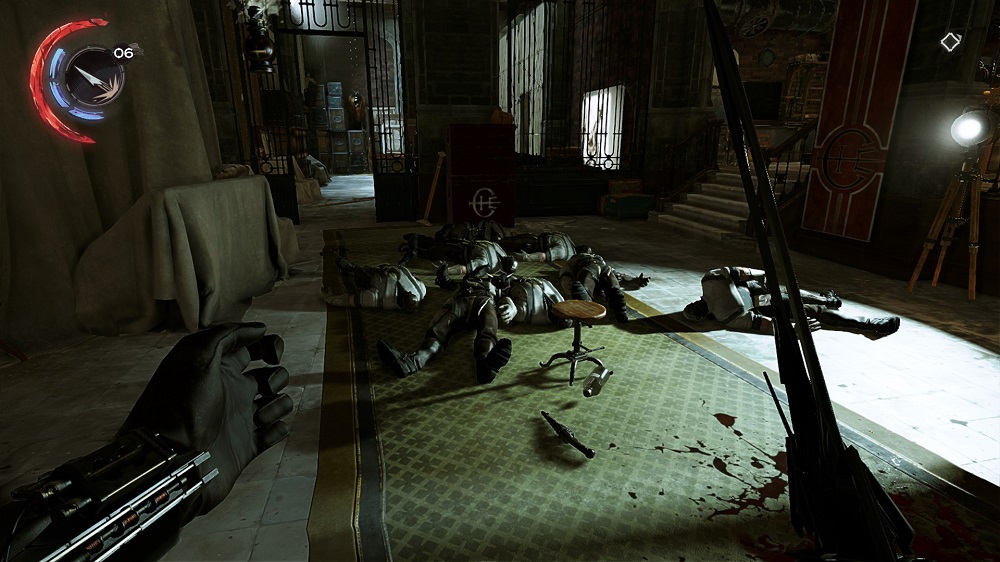 Honestly most of my screencaps are just piles of corpses because I am bad at everything.

I used that freedom mostly to climb tall things to kill a lot of people who, in my defense, wanted to kill me too. Sword killing? Great! Lots of fun violent animations. Shooting with hand-dart arrow things? Not as satisfying, although sometimes (I don’t know why) it gives you a cool slow motion Skyrim-style shoot-cam that’s fun to watch. Mines? So good! Throwing whale oil canisters on people? Never gets old. I can only imagine what wonder grenades might have added to the mix if I could have ever figured out how to use one. 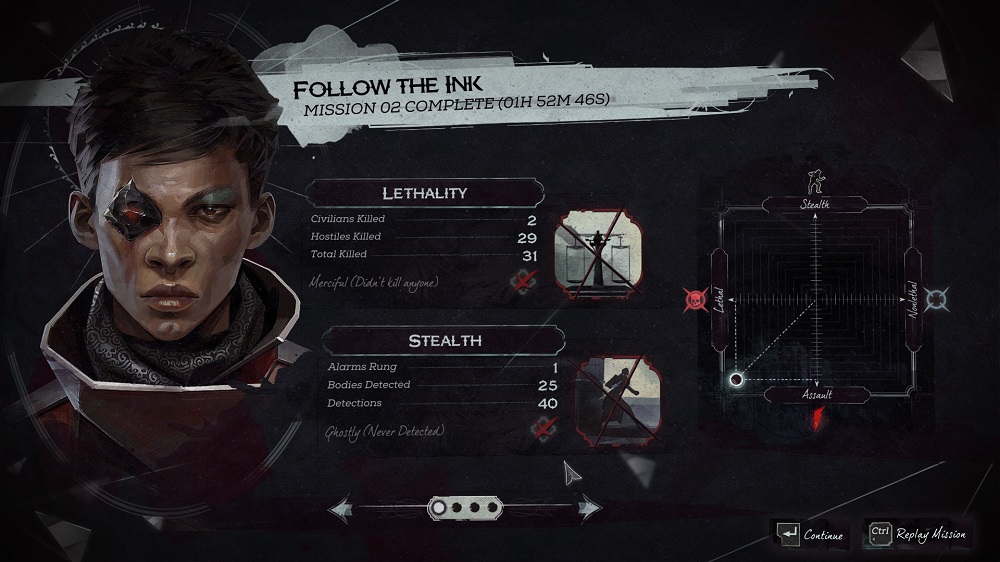 I love you Billie Lurk.

This is a fun game. It has good violence, if you’re into that kind of thing, and on easy mode it’s almost relaxing how little consequence there is to any mistakes you might make. But it’s also just so great to see a major games developer consistently shrug off the idea that a protagonist has to be a white man somewhere between CW Love Interest and CW Hot Dad in age whose character development can be deduced by counting the number of grey hairs in his angst-stubble. I will happily fail a million times at your stealth puzzles and your mercy missions if you keep giving me protagonists I would actually want to have a beer with.