Welcome to This Changed My Life, an ode to the small, seemingly chill purchases bought by Autostraddle writers and editors this year that made our lives infinitely better. Did these items LITERALLY CHANGE OUR LIFE? No, we’re being gay and dramatic. But perhaps a pair of sunglasses really did change your life — who are we to judge? 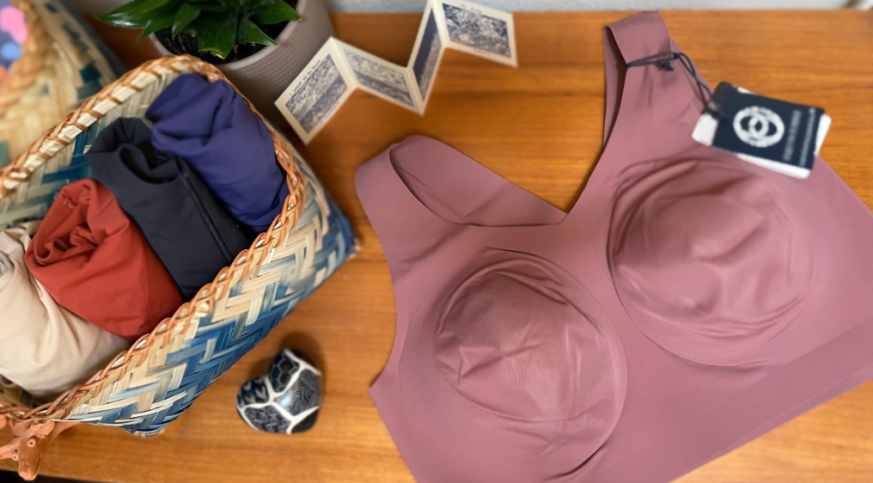 As a teenager, I did NOT want to think about my boobs. Alone in Gottschalks at 16, after staring, horrified, at everything in Victoria’s Secret, I found one of those stiff-boned strapless bras, attached the optional straps, tightened them as far as they could go, and vowed to never, ever leave the house without it. I even went “skinny dipping” in that thing once, and only wiggled out of it for a couple hours once all my friends had gone to sleep, setting it to dry in the window of the treehouse we’d settled our sleeping bags into. I remember watching the sky turn gray with dawn beyond it, waiting until the last possible moment to put it back on before anyone woke up and saw me without a bra, my biggest fear. I was already wearing a D cup, and my chest would only get bigger from there.

Decades later, I was wearing a UK HH cup, and I’d gone through just about every underwire bra that the US and UK had to offer. My work bras were underwire. My sports bras were underwire. Even my swimsuits were underwire, and I was a mess. The space between my shoulder blades always throbbed. The wires dug into the skin of my torso, leaving angry red marks every day. The straps slipped off of my narrow shoulders every 2-3 steps, but racerback versions sent my muscles into flare-ups. I was over it.

So I started looking for wireless bras. And believe me when I tell you, I tried them all. The bralettes from Soma were whisper-soft, but stretched out in the course of an hour. The wireless bras at Lane Bryant were stiff and somehow still too small. The busty bralettes from Cosabella were supportive, but way too lacy for my very-soft butch sensibilities. And then I found it. The One.

A few years and one work-from-home pandemic later, this bra has truly proved itself. It’s thick-strapped, but not grandmotherly; wireless and clasp-free, but not flimsy. It doesn’t create quite the same silhouette that my underwires did, but I can pull it on in the morning, run around with my dog Milo, work at the computer, go for a hike or take a nap…and nothing hurts. It’s seamless under t-shirts, it stays compressive over the course of the day, and I can use it as an impromptu swim top or keep it on overnight when I’m camping. It’s absolute magic.

It’s called the Defy Bra, from Evelyn & Bobbie. It comes in three shades of nude, in black, and in seasonal colors that often go on sale right before they debut new ones. It features a scoop-neck front and a full-coverage back, with straps that never slip off my shoulders — a true first for me. It feels like a hug, like a binder might, if I’d ever found a binder that worked for me (and yes, I’ve tried GC2B). It fits me like a fancy, low-to-medium impact sports bra, although it’s woven so that there’s a bit less uniboob. It comes in sizes S-3XL, which their size chart says covers cups C-K, and band sizes 30-52; I wear a UK 42HH and am most comfortable in the 2XL. At $78, it’s not cheap, but wearing that bra is the closest I’ve ever gotten to feeling comfortable with my chest, moving my body without being reminded of my chest at every moment, and that, for me, is worth it.

The Defy Bra changed my life. Maybe it will change yours, too?

Join A+!
Related:This Changed My Life