We’re gifted with a frontal shot of the movie’s main character, Alike (pronounced Ah-LEE-Kay). She stands close to the stage, bathed in purple light, wide-eyed with her mouth agape, watching as an exotic dancer performs on the pole. Her face is an unmistakable mix of wonder and attraction. With Khia’s “My Neck, My Back” thumping in the background — because subtlety doesn’t exist in a nightclub — Alike is urged to engage. First, her best friend shoves a fistful of singles into her hand to toss appreciatively and then by the dancer herself. But instead of engaging, she retreats to a booth, popping her collar as she sits, and the camera’s lens shifts. Suddenly, our view of Alike is limited: we only get to see her profile. 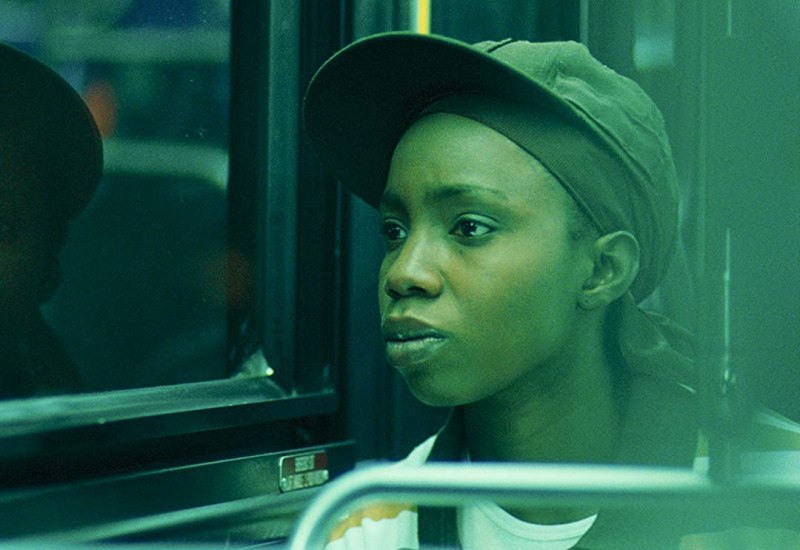 That view of Alike follows her on her way home, though this time, she’s painted by green light. As the bus moves closer to her Fort Greene home, Alike slips out of one costume — the oversized polo, her baseball cap and durag — and into another: hoop earrings and the now exposed baby doll t-shirt with “Angel” written across her chest in glitter.

In these few minutes, the beauty of Pariah — the reason it’s my favorite queer movie of all time — come into sharp focus: everything about it feels intentional and authentic. There are no wasted moments, no throwaway dialogue, no superfluous shots; everything works in concert to center the story of this black, masculine-of-center teenager. Instead of engaging with the broad platitudes that prevade coming out stories, Pariah breeds commonality and understanding through specificity. First penned as Dee Rees’ thesis for NYU Film School, Pariah was honed over seven years…and the film that results is a stunning achievement.

Adepero Oduye plays Alike, a 17-year-old girl trying to navigate her way through life in Brooklyn. At school, she’s an adept student — excelling in writing and with poetry in particular — who navigates the hall with a masculine swagger. Everyday, she rushes into school, changes out of the clothes that met with her parents’ approval and into the uniform that feels more like her…the durag, the fitted cap, the oversized polo. She’s a lesbian, chasing her first love, and searching for a way to make her two worlds coexist. Oduye astounds as Alike, reveling in her swagger (however feigned) when the moment calls for it and leaning into her softness in others.

The easy narrative for coming of age stories like Pariah is that coming out…even just realizing that you’re gay…means that things are settled. You finally have the answer to the question that’s eluded you your entire life. The reality, however, is far more complicated. Perhaps you understand this one facet of your identity but how much of everything that came before was authentically you? How much of who you were then was shaped by the closet or the gay community that surrounds you? Dee Rees tackles those questions in Pariah: for most of the film, Alike is a chameleon, disappearing in the light of her surroundings — purple in the club, green on the bus, pink at home — only ever showing you her profile when she’s forced to be less than her authentic self.

Alike comes home to an assertive mother and a distant father (Kim Wayans and Charles Parnell). They both see what their daughter’s becoming but deal with it in different ways. Her father, Arthur, assumes it’s all a phase — that Alike will grow out of it, if given time — and pretends to not know where she’s going when she leaves for the club. Alike’s mother, Audrey, on the other hand, is intent on saving her: with her Bible and devotional in one hand and a new pink sweater in the other. Ridding her daughter of her lesbianism is, perhaps, an easier task than saving her own marriage which is on the verge of collapse. Convinced that Alike’s best friend, Laura (Pernell Walker), is actually her girlfriend, Audrey seeks to curb her influence, by introducing Alike to Bina (South of Nowhere‘s Aasha Davis), the church-going daughter of one of her co-workers. Unbeknownst to Audrey, it’s Bina that flirts with her daughter and kisses her and pulls her into her first intimate experience. It’s Laura on whom Alike rests when the heartbreak — from Bina and her parents — becomes too much to bare and she just needs to curl up and cry.

Alike’s hurt is real and Oduye makes you feel all of it but the movie doesn’t dwell there (it’s hard to imagine another writer resisting that urge). In the end, Pariah is a story of being broken — of being “broken open” — and ending up stronger at the broken places and letting the new light shine through.

Join A+
Related:lost movie reviews from the Autostraddle archivespariah the movie