As of this World’s Finest #26 there’s a new Power Girl on the block. I’ll be the first to admit that I love the original Power Girl. When she’s written and drawn by Jimmy Palmiotti, Justin Gray and Amanda Conner, she’s funny, she’s fun, she’s feminist and she’s one of the strongest heroes in the DC Universe. But dang, I am super excited to see this new character take over the mantle. Black superheroes are really rare, and black teenage girl superheroes are even more rare. It’ll be great to see her saving the day and inspiring people when she joins the Teen Titans in the upcoming Teen Titans #6. 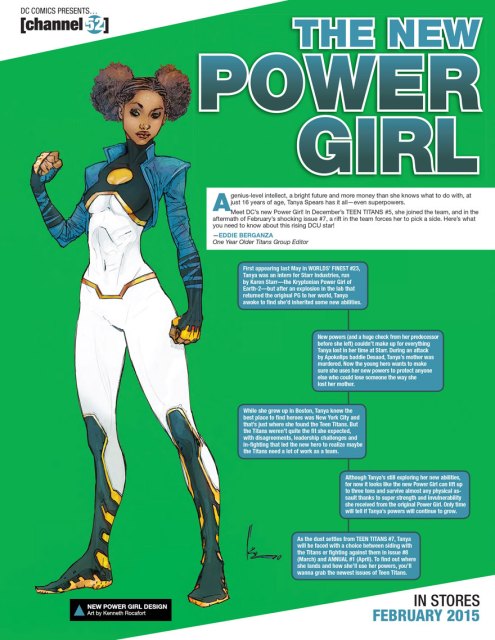 art by Kenneth Rocafort. To see a larger image check out The Mary Sue

The new Power Girl’s name is Tanya Spears and she’s a seventeen-year-old supergenius who also now has super strength and invulnerability. She was first introduced last May in World’s Finest #23 as “the world’s smartest seventeen year old” and an intern for Starr Industries, which was run by the former Power Girl. As you can see, she has a cool new costume that has a few nods to the classic costume but also gives her her own cool new look. I’m really excited to see this character grow and make a name for herself as Power Girl.

The original Power Girl (who went by the Earth name Karen Starr) was, like all prominent Kryptonians (for whatever strange reason), white. She was an alternate Earth (Earth-2 specifically) version of Superman’s cousin Kara Zor-L (it’s just “L” on Earth-2, not “El” like on Earth Prime), who on Earth Prime is known as Supergirl. Earth-2 is kind of where comic writers go to if they want to use old school Silver Age heroes. It’s also where Supergirl (Karen Starr) and Robin (Helena Wayne, Batman and Catwoman’s daughter who later becomes The Huntress) came from before they traveled to Earth Prime. (Complicated, I know! Comics are some pretty confusing stuff.) She was also pretty famous for the “boob window” on her costume that showed off her much-larger-than-average cleavage.

Anyway, Power Girl and The Huntress had this series called World’s Finest where they superheroed around on Earth Prime. It was Tanya Spears who got them back to their original home dimension. However, she also lost her mother, who was murdered during an attack from some supervillains from the world of Apokolips. Additionally, in the process of sending the old Power Girl and The Huntress back, she also gained super strength. That’s pretty cool. 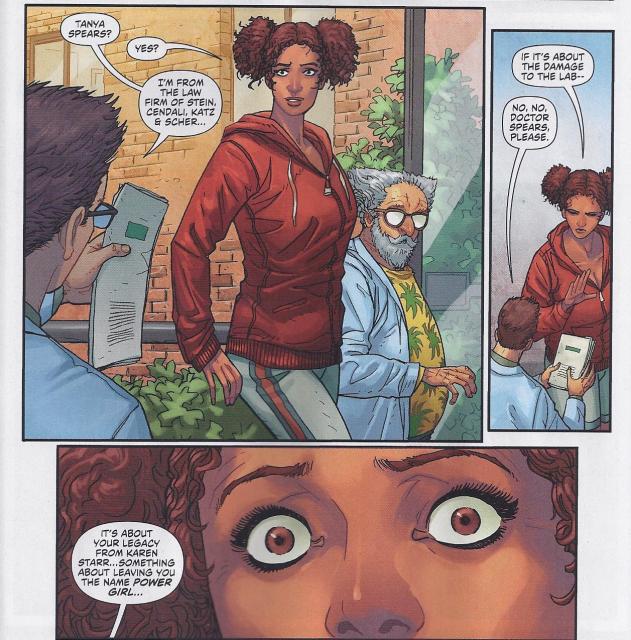 Shortly after that, in issue #26, Tanya was approached by a lawyer who told her that Karen Starr had left her the name Power Girl. This is really cool. Here we have a case where the new hero doesn’t just pick up the name of hero she admired or is the descendant of, she was straight up bequeathed the name and title by the previous owner. This sends a clear as crystal message that Karen Starr respected Tanya Spears and that we should too. I really like that DC decided to do it this way and have a direct hand off so that there’s no way anyone can claim that Tanya Spears isn’t the “real” Power Girl. Even the original holder of that title says she is.

This new Power Girl (as Power Girl) first appeared in Teen Titans #5 and will be back in issue #6 when it comes out January 21st, so you can be sure I’ll add the title to my roundup of comics to check out in my Drawn to Comics column. She also made a brief appearance in Future’s End World’s Finest one-shot last November which showed a “possible future” of the New 52 DC Universe. 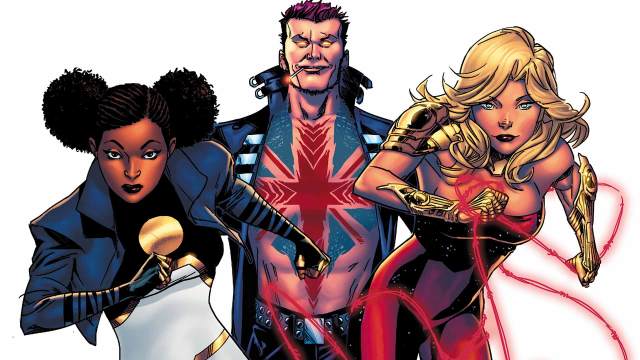 From the Teen Titans #6 cover by Kalman Andrasofszky

This move is clearly going to draw some comparisons to the move Marvel made last year when it introduced Kamala Khan as the new Ms. Marvel. In both cases a previously white superhero’s legacy has been handed down to a teenage girl of color. Boy oh boy did that work out well for Marvel. Not only was Ms. Marvel one of the most critically acclaimed and fan favorite series of the year, it also sold incredibly well. Let’s hope Tanya Spears’ reception goes just as well.

Power Girl now joins the group of DC’s Black teen girl superheroes, which already includes Rocket, Thunder (who is also a lesbian) and Lightning, Virtue, Natasha Irons and Bumblebee (these last three being the only ones who have been in the New 52), and she’s a very welcome addition indeed.