OH MY EFFIN G TWITTER IS UP AND DOWN: “We are defending against a denial-of-service attack, and will update status again shortly.”

Firstly – if you’re queer and you’re reading this, and you know when it is exactly that you knew you were queer, please tweet @autostraddle as cleverly as possible using the tag: #wheniknew. We’ll publish all on autostraddle on Friday SATURDAY and the best one will win a TBA prize, but it might involve a vial of Angelina Jolie’s blood. It might involve a sticker. You never know.

Anyhow! Back to things you DO know, lesbians & allies! We proceed valiantly forward with our ‘When I Knew I Was Gay‘ series with Part Two today! Part One kicked ass. Also, the Wednesday Televisionary covers Shark Week and our stuffed mascot Tinkerbell recapped Intervention, FYI.

HAS ANYBODY SEEN HEY PAULA: Paula Abdul broke the news via Twitter that she is quitting her Idol gig. Kara DioGuardi will be the only lady there. We hope this means Paula is going back to her true calling Hey Paula. @newsweek) 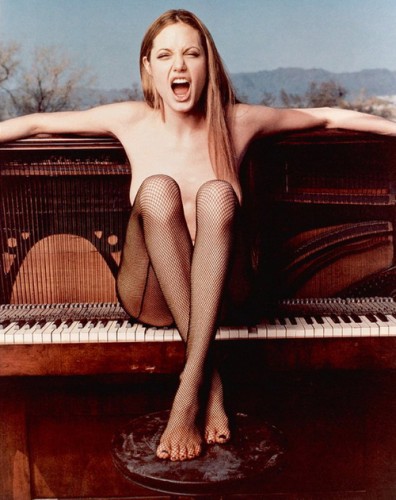 THERE’S NO SUCH THING AS AN EX-GAY: Much to everyone’s shock & awe, turning someone from homosexual to straight just don’t work. Yup that’s right GAY CONVERSION PROGRAMS DON’T WORK. And now we have a 138 page paper to prove it, too! (@cnn)

FOR EXAMPLE MY WIFE: Brad Pitt to Parade Magazine: “They say homosexuality is a choice, a lifestyle, something you can be cured of, and that isn’t true. But if you’re tucked away and have no friends who are gay, you’ll believe what the preachers say.”

GIRLBARS: Can a lesbian club make you gay? According to our writer, possibly! “I decided to walk to the bathroom (where I saw two girls going at it hardcore) and splashed some water on my face. I nearly started talking to myself in the mirror. What are you doing? You. Like. Penis. Right? Right.“: Why a Lesbian Club Made Me Consider Switching Teams (@lemondrop)

DOUCHEBAGS: Religious right spokesperson who wanted to ‘export homosexuals’ nominated for an award. I’m trying to think of a funny Hitlerish joke that could work for this but maybe there aren’t any. (@pamshouseblend)

MELROSE PLACE: This is how lame the world has gotten, we are now repeating terrible (but entertaining!) shows. Perhaps a musical of Party of Five is next!  On the upside, the new Melrose Place will get a gay in the vein of the original’s Doug Savant. And hopefully people will complain less about it this time. (@advocate) 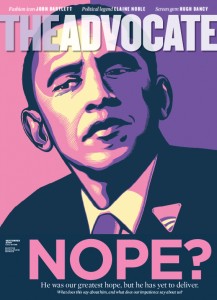 OBAMA: Advocate editor explains why they put Barack Obama on the cover of the September issue for the story “Hope and History.” (@advocate)

BRITNEY: A look back at the highs and lows of Britney’s VMA performances through the years. (@rollingstone)

EMOTICONS: A mom discovers semicolon-right-parenthesis.. We have no words. ;-) !!!! (@buzzfeed)

I LIVE HERE: If you live in the Los Angeles area, come out and support Mia Kirshner’s benefit for I Live Here on August 22. (@operationusa)

ADVERTSING: This segment of  CurrentTV’s “That’s So Gay” shows you how ads are quickly re-done for a gay or straight audience. It’s pretty shocking — but we gotta say we’re not exactly enraged. That’s what advertisers do; they target their ads for the audience that will view it. In fact, this kind of targeted advertising, we think, is way more effective. In an increasingly custom-content-oriented world, people want to feel they’re getting a message that’s just for them. That’s just good business.

SUMMER IN THE CITY: Sandra Bernhard reports on Summer in New York and sounds absolutely nothing like the Sandra Bernhard that talks dirty on stage or on the teevee. Seriously it’s like, who is this nice lady talking about flowers, love, good dinner and Shakespeare? (@huffpo)

BUT I’M A CHEERLEADER: “One gay man recounts 19 year-old Patrick McAlvey who tried ditching his gayness with the “help” of Mike Jones, the director of Corduroy Stone, an affiliate of Exodus International. Jones engages in “holding therapy,” which is about the most homoerotic version of counseling we’ve ever heard of. “(@queerty)

from Intern Jess:
Do you ever feel guilty about lack of productivity in any given day? Compare how much time you spend eating, sleeping, working, cleaning, socializing, traveling and entertaining against different demographics.

In this 2000 interview with kd Lang, the crooner opens up about her relationship at the time with Leisha Hailey, who she describes as “incredibly easygoing and loving and fun and childlike … she is unique, she’s one of a kind. I’m not even sure she’s mortal.” We find celebrity exes so fascinating! 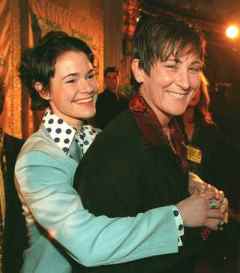 How did you meet?
At a friend’s birthday party. I didn’t even pay attention, but she knew.

Did she ask you out?
Yeah, which was big. Gutsy to phone k.d. lang up and ask her out! No one really asked me out—ever. I just went, “Well, right on, kid, way to go!”

Did you know right away that she was the one?
No, but she did. I always assumed I would be with an older writer—or a model. I mean, I’d been dating models! I didn’t think I’d be going out with a punk rocker who was 10 years younger! We’ve really just taken it a day at a time, and every day has been great.