Grammy Award winning children’s musicians Cathy Fink and Marcy Marxer release their 44th album today, titled Dancin’ In The Kitchen: Songs For All Families. The recently married couple, who refer to their relationship as the “30-year engagement,” hope their album follows in the footsteps of Marlo Thomas, famous for creating the universally famous 1972 album celebrating diversity, Free To Be… You and Me. Surely you’ve heard it, maybe even suffered through assembly-time renditions in grade school. My middle school even printed Free To Be themed day planners. Thing is, though revolutionary for its time, Free To Be is a little dated. Fink and Marxer hope they can bring the spirit to contemporary issues. 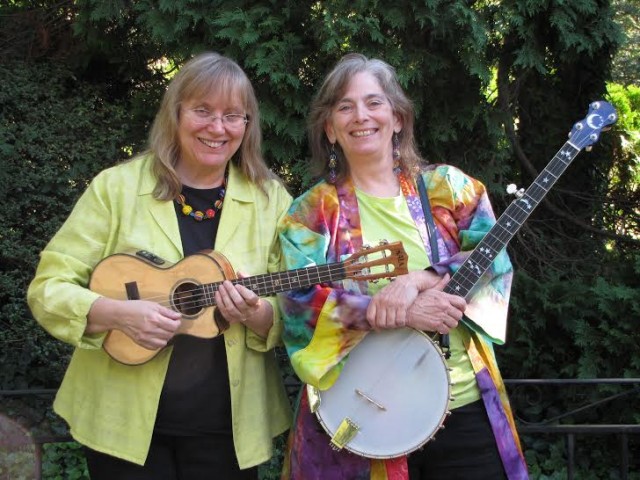 Fink and Marxer want to expand our definition of diversity. They have songs about adoption (“Happy Adoption Day“) and LGBT families (Dancin’ In The Kitchen With Mama and Mommy/Dancin’ In The Kitchen With Daddy and Papa). Primarily, the duo are concerned with complicating the notion of the nuclear family, and instilling children with the notion that every family looks different. “Marlo Thomas defined a family as a feeling of belonging,” Fink tells me:

In the song “Soccer Shoes,” a child can’t find their soccer shoes because he lives with separated or divorced parents. “Twins” is a song about identical twins, written and performed by actual identical twins. The album boasts multiple songs with titles like “I Belong to A Family” and “Family Song,” all celebrating the different ways to define family.

Fink and Marxer use this album to open up discussions about themes that many parents might be hesitant to tackle. The album contains a story written and told by storyteller Andy Offutt Irwin, “Who’s In Charge of Naming the Colors?” during which we are prompted to discuss the oversimplified ways we identify skin color. A little boy sees some paint swatches at the hardware store, and uses them to name the colors of his multiracial family. Creating space for difficult conversations between parents and children has been both a goal and a side effect of their music making through the years. In 1992, the duo invited a children’s chorus to perform on their song “Everything Possible,” written by Fred Durst. However, upon reading some of the lyrics, many parents decided to pull their children out of the project. The offending lyrics?

There are girls who grow up strong and bold/There are boys quiet and kind/ Some place on ahead, some follow behind/ Some go on their own way and time/ Some women love women/ Some men love men/ Some raise children, some never do/ You can dream all the day never reaching the end of everything possible for you.

In the end, no matter the parent’s decision, each parent had to sit down with their child and explain exactly why they were not being allowed to participate in the chorus with their friends. I asked Fink if any of the parents ended up changing their minds about participating after a conversation with their child:

There was a family who came into the studio, they had a son in the sixth grade. The father was in the military, and apparently the mother and father had some pretty ‘hearty discussions’. He was against it, she was for it and in the end they left it up to the child. And the child said ‘I definitely want to sing that song.’ The interesting discussion between the mom and dad was that they had a son in college. And the mother finally looked at the dad and said ‘Are you trying to tell me that if our son comes home from college and says he’s gay, you’re not gonna love him?’

“Everything Possible” is also included on the tracklist for Dancin’ In The Kitchen.

The newlyweds will certainly be continuing to make music that embraces diversity, and you can keep up with their albums and children’s concerts at their website, cathymarcy.com. Buy Dancin’ in the Kitchen: Songs for All Families on Amazon.

Hannah has written 37 articles for us.