Carmilla Act II was such a rollercoaster! Mattie is back.. sort of. She was temporarily resurrected to be the puppet of the goddess the gang summoned from the Beyond. She won’t be recruited by lowly mortals to fight the Dean, but she will give Laura her locket if she wins a game. However, if Laura loses, she loses her life. Laura agrees as long as she gets to choose the game. Is it liar’s dice? Is it black jack? No. Laura chooses Scrabble, obviously, and she wins spelling the word quixotry (which means “behavior inspired by romantic beliefs without regard to reality,” by the way). So now the gang has three talismans. The fourth is Vordenberg’s heart, which was destroyed when Laura killed him. Whoops!

Laura is upset she played right into the Dean’s hands by destroying the board and the last talisman. Also, her dad leaves to rouse any kind of troops willing to fight the Dean. Carmilla tries to comfort her, and tells her to stop wagering her life with a death goddess. But really the only thing they do is have sex on the desk again. I bet that makes Laura feel better! Good job, Carm!

Later, they’re brainstorming ideas to stop the Dean since the talismans won’t work. JP has another idea: when the Dean opens a seal, she is weak, and that may give them an opportunity to exorcise her from Perry’s body. Carmilla is not a fan of this idea. They argue and bicker about it, and don’t come to a decision. Once LaF leaves, Carmilla and Laura are alone again to discuss their “office-furniture-related slips.” Maybe they could keep things casual and enjoy their time together. She means sex. Enjoy sex together. That’s what Laura means. But every time she’s about to say it she jumps back and waves her hands in that adorable puppy way she has. 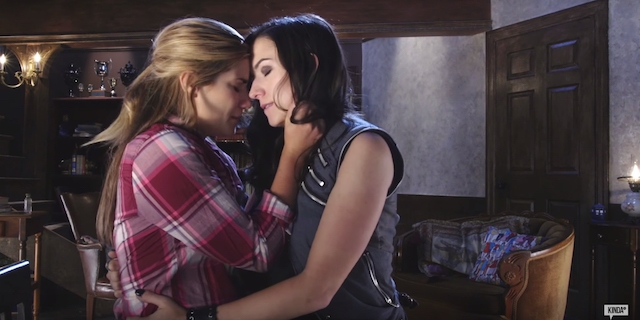 They have a steamy moment again before LaF barges in with an unconscious Dean over their shoulder. Make room for trouble. They create a summoning circle again to trap her. Carmilla is pissed. She is yelling! I didn’t even know she could yell! She says “feed her to the space whale” with a straight face!

But LaF isn’t giving in: they’re not going to send Perry to her death, even if they don’t know how exactly to save her. The gang takes shifts to watch the dean while she sleeps. LaF goes first and gets to have a moment to apologize to Perry, if she can hear them. It’s tender and sweet and perhaps speaks to some issues LaF has had too. You’re not small, LaF says; that’s just the story it tells you. 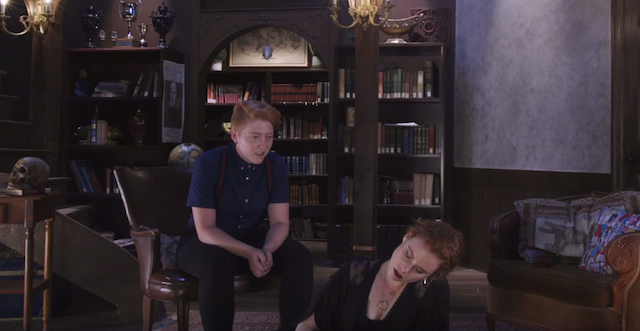 Leave me alone, LaF; I’m not waking up until this election is over.

The Dean wakes up and the magic barrier seems to work, but the exorcism doesn’t. While she’s trapped, she’s ready for psychological warfare. After a montage of her driving everyone crazy, she finally passes out. But not without getting under Laura’s skin.

Laura is struggling. She wonders if she had just stayed out of the way, would the world be in danger at all? Carmilla sits next to her and assures her that the option of sitting out didn’t do much either. Carmilla thought that nothing she did would matter in the grand scheme of things (if there even is a scheme) but then she met Laura. Laura, who felt that everybody, even Carmilla, deserved better. “And yeah, you are flawed. And struggling. And uncertain. But it is so beautiful the way you try.”

I don’t know how anyone could see that face saying those words and not want to kiss her. Laura can’t either. And she says to hell with being casual: love is hard and scary but she loves Carmilla and that’s something to hang on to. The earnest kisses and Carmilla’s steely, unsure smile make this scene so beautiful. Everything in season 2 has led up to this moment. I am done: feed me to the space whale.

Do you think it’s weird that the dean is asleep during this whole thing? Don’t worry, she isn’t. She stands up and sarcastically slow claps. Devastating. Mattie shows up too and tells the children to run along so the grown-ups can talk. Sophie Walker and Annie Briggs have great chemistry. I’d for sure ship them, except the Dean and Mattie are mother/daughter and the Dean and the death goddess are sisters. Fine, show, I’ll stop. 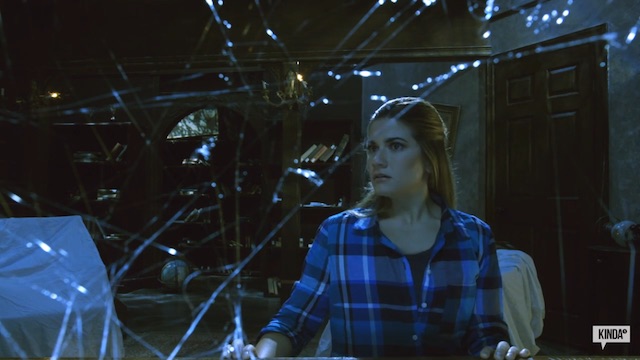 Carmilla? I found a pretty sturdy coffee table down here!

Anyway, when Mattie poofs away, the Dean tries one last time to get Carmilla to return to the fold. When Carmilla refuses, Danny and Theo return to free the Dean and get the talismans. Also the Dean needs Carmilla as a sacrifice to open a gate. Great! Laura comes in right as they’re about to take Carmilla and the talismans. There’s a fight scene that defies logic and explanation; it has to be seen to be believed. Right as Laura is about to be killed, she disappears. Like she poofed into a place that looks like the library but is covered in cobwebs and nobody else is there. Is she in the Upside Down?

Tune in two weeks to see Act III and then we can cry together!