I shared my room with two girls of color. One of these girls was a rare thing for Berkeley: a Chicana. Her name was Ruth and she came from the outskirts of Fresno. She kept a framed photo of her dad shaking hands with Bobby Kennedy by the grim reaper bong on her desk. She had beauty like Hannah Wilke and Mom. She was so beautiful that she had a boyfriend. I knew when it was him on the phone because after answering, Ruth would say, “Yes, I accept,” to the operator who’d asked her if she’d take a collect call from jail.

Ruth slept on the bottom bunk. She tacked a Metallica poster and a Metallica calendar up on her chunk of wall. She drew rosaries around her boyfriend’s court dates. Inside the rosaries, she drew angels that looked more like bats.

Helen got the top bunk. Helen was Chinese. She taught me to say “shut up” in Chinese. She never studied for school. She sat at her desk studying hair manuals. One of her aunts sucked at English and was getting her cosmetology license. Helen was going to take the written part of the exam for her. I admired Helen for this.

I didn’t, however, care for the way our dorm smelled. It smelled of dry humping and shrimp ramen. 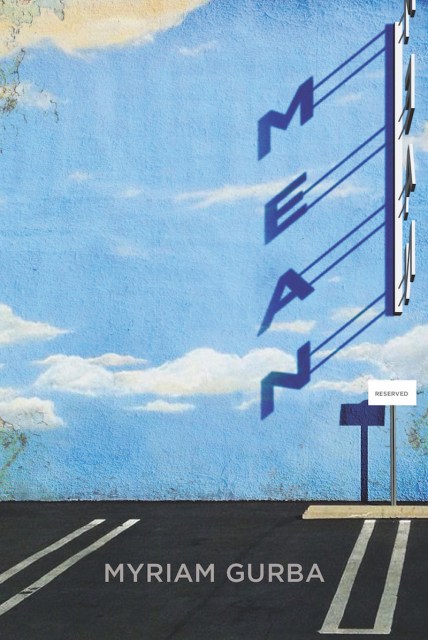 I stayed in bed one morning with cramps. They were so bad they were giving me visions.

“I can’t,” I groaned. “I’m birthing blood clots.” My cramps martyred me. I deserved canonization.

I missed my English lecture. I was taking a class on modernism. I didn’t know what modernism was; I just wanted to take an English class. So far, I’d sort of read The Sound and the Fury and To the Lighthouse. We were going to read The Adventures of Huckleberry Finn and Heart of Darkness.

My classmates nodded. I drew an H in my notebook. I labeled its parts as Dr. Brown had done. I didn’t care about form, content, structure, or Mrs. Dalloway. I wanted to hear about Virginia Woolf’s suicide. I wanted to know how wet her clothes had gotten in the River Ouse. I wanted to know how many rocks it had taken to weigh her down. The best feminists are dead and wet.

The best feminists are martyrs.

Dr. Brown lectured to a mostly empty room. I always sat next to a black boy whose eyes invited me into his life. There was nothing malicious or misogynistic in them. They were filled with houndstooth scarves and homosexuality. He told me his name softly, “Nathan . . .”

Nathan liked David Lynch movies. He delivered gelato in the city. I could tell he’d had braces. His teeth were way too straight. He agreed with me that the class was stupid and that our professor kind of sucked.

She slurped black coffee while she lectured, and her hands shook so badly that the liquid sloshed over her paper cups’ edges and spilled. Her silver watch caught the classroom light. When she waved her hands to make points, her armpits dazzled me. Matted tails spilled out of them. I’d never seen a woman with armpit hair like Dad’s before. Mom always trimmed hers once it became stubble, and she’d bought me an electric razor and taught me to trim mine, too.

I modernized my armpits. I quit dragging a razor across them.

Our English reader held a few Xeroxed Harlem Renaissance poems, Woolf’s “A Room of One’s Own,” some Salman Rushdie stuff, and a bunch of bullshit by Gertrude Stein that got on my nerves. I tried to read it, but it infuriated me. Alpha-Bits cereal. Its marshmallow letters oat in milk and make no meaning. That was Gertrude Stein.

During her Stein lecture, Dr. Brown read an excerpt from A Book Concluding With As a Wife Has a Cow: A Love Story. “Nearly all of it to be as a wife has a cow, a love story . . .” she began, and as she got deeper and deeper into the piece, she read it with more and more Eros. It was gross. She made her voice cummier and cummier. Finally, once she was done, Dr. Brown said, “Stein was a lesbian. Her lover was Alice B. Toklas.” She grinned. Her hand trembled. Her coffee cup quaked. Coffee spilled. She said, “This piece is about bringing a woman to orgasm.”

Nathan and I cringed. Dr. Brown hadn’t committed completely to her cummy reading about the cows. To read a piece about lesbian e e cummings, you have to fully commit, but you could tell Dr. Brown was scared. The fright tarred her performance. It made it pathetic.

Nearby, a thirty-something white lady student looked on, unaffected by Dr. Brown’s reading. She crossed her legs and brushed her blond hair behind her ear.

A pale student with dreads spent our entire time in English section diagramming how Joseph Campbell’s hero’s journey applies to The Adventures of Huckleberry Finn.

It was so annoying.

The only thing I cared about in that book was racial dynamics.

Our TA was handing back our papers. She was a thick white girl with blond hair, a Norse name, and intense calves.

She set my essay facedown on my desk. I flipped it over. A scarlet C marked it.

The letter made me feel cold and wet.

I was not an artist, a revolutionary, a saint, or a genius.

I was a C student.

The TA set a paper on a desk by a tall window. Fir arms stretched past it. A black girl who often came to class in a leotard and sweats was seated at the desk. Her hair was pulled up in a Degas bun.

The TA pulled her leather satchel to her chair. She lifted it over her shoulder. She waddled out of the room with the dreadlocked student, whom everyone suspected she was fucking.

The ballerina tipped her paper over. Skinny tears spilled and wended down her cheeks.

Her tears continued. Her legs rubbed together. I felt sad for her. I tried sending good vibes to her bun.

I turned to Nathan. His scarf sailed over his shoulder. Tassels fell against his tweed jacket.

The ballerina said nothing. She was pretty when she cried. Bitch.

I shoved my C in my bag and walked into the hallway with Nathan. It smelled like wood and anxiety. I felt wooden and anxious. Like a termite.

I was wearing my purple sweat suit and lying in bed. Ruth and Helen were away. I stared at the ceiling and pondered my C.

This excerpt is reprinted by permission from Mean (Coffee House Press, 2017). Copyright © 2017 by Myriam Gurba.

Mean, a mix of memoir, true crime, ghost story, and queer mixed-race Chicana coming of age, is the fourth book in Coffee House Press’s collaborative series with Emily Books, and comes out November 7.

Myriam Gurba lives in California and loves it. She teaches high school, writes, and makes “art.” nbc described her short story collection Painting Their Portraits in Winter as “edgy, thought-provoking, and funny.” She has written for Time, kcet, and the Rumpus. Wildflowers, compliments, and cash make her happy."

Myriam has written 1 article for us.