These days, people love to say we’re at a “transgender tipping point,” a market so saturated with trans faces and stories that the battle must be more than halfway won. People know the names — Janet, Laverne, Caitlyn — and those who have long focused on the L and the G are beginning to mention the T more and more. The consensus is that we’ve made progress, and some seem confident we’re hurtling rapidly toward the horizon of equality. That’s an assumption the curators of Bring Your Own Body, a new exhibition at the Cooper Union in New York, are hoping to upend. 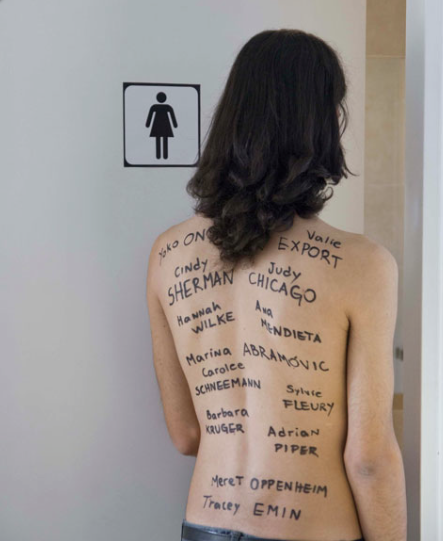 “Although it’s very timely in terms of unprecedented visibility of trans narratives, if you visit the exhibition you can also see the cycle of sensationalism around trans is nothing new,” Stamatina Gregory, associate dean of the School of Art at Cooper Union and a curator of the show, says. “At this particular moment, it’s also important to burst open the kind of newly normalized narrative of trans.”

Through an exhibition of both contemporary artwork by a slew of trans artists and creators — Justin Vivian Bond, niv Acosta, Genesis Breyer P-Orridge and more — and a truly impressive selection of archival documents from the Kinsey Archives and the University of Victoria Transgender Archives, Gregory and co-curator Jeanne Vaccaro work to fill in the gaps between what many see as signs of mainstream progress and the true, vast history of trans people’s lived experiences.

The most obvious representation of the past wrongdoing against transgender people is a mock broadsheet featuring a collage of newspaper headlines: “Ice Cream Man Becomes Lady,” “COPS THAT DRESS AS GIRLS,” “Ten Little Unhappy Boys Made Happy Girls by Surgeon’s Knife,” “‘Girl’ in dock was a man,” “SWISH SET DEMANDS EQUAL RIGHTS.” Their word choice and font selection betray them as decades old, but the spectacle they create out of subverted gender expectations could easily be mistaken for a modern-day gossip mag headline. Images of Christine Jorgensen, famed for her very public transition, immediately call to mind Caitlyn Jenner‘s Vanity Fair glamour shots: 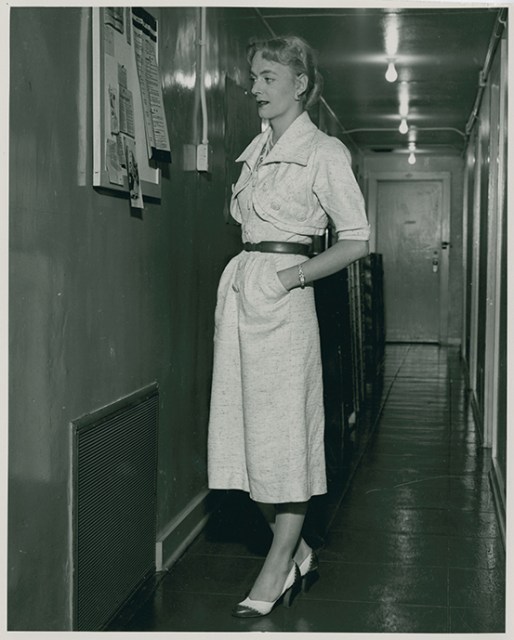 It’s in the issues of Transvestia and other documents, arranged on a table in the back space of the gallery with the archival selections, that you find the deeper stories. In personal ads and letters, writers describe themselves by location, assigned gender and age (Wash. — Male, 46) as well as their identities and personal desires (Wants very much to be a girl in all ways. Please help.) The last part of many entries is a name: Laura, Denise, Linda. It’s striking and, even next to the joyous elements, like the essays and correspondences and comics in Transvestia, often profoundly sad — because no matter how developed a culture they represent, it’s still a part of history that was hidden as it happened and has been allowed to fade from memory.

But before you reach the archives, tucked around a corner in the back of the gallery, the grand front room leads you through the work of the contemporary artists recording trans experience in realtime. It’s a space full of self-determined trans representation; not pictures of trans people dressed up and posed for cis photographers, but works of art expressing body, beauty, pain and progress. 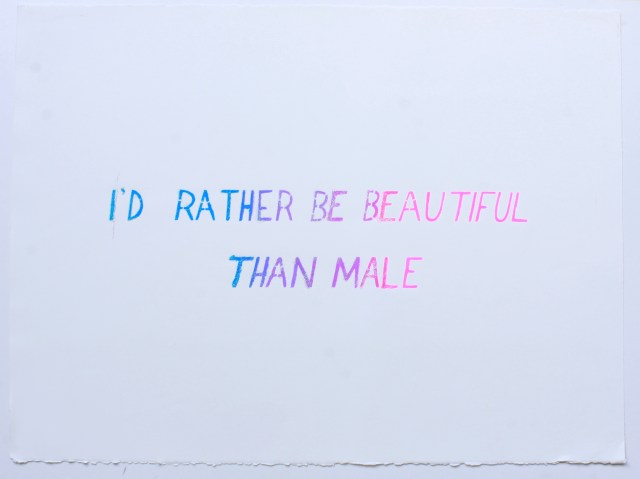 Some of these contemporary selections, like Mark Aguhar‘s drawings and the images of Lady Jaye and Genesis P. Orridge, express a divided longing similar to that of the personal ads from the archives. An installation by Justin Vivian Bond reflects the glamorous femininity of the archival photos, but brings the artist’s image and self-creation into the mix. Vaccaro says they thought a lot about the “legacies and genealogies between the artists” in the collection, and indeed many of the artists on display have or had relationships with one another. Other selections stress another element of transgender storytelling: loss. The items on display from the collections of Aguhar and Effy Beth, both of whom died by suicide, are striking on their own but take on more weight with that knowledge.

“That kind of work epically points to how much more work can be done, that there exists to be done, and how difficult it is, too,” Gregory says. “The trans community loses people all the time.” 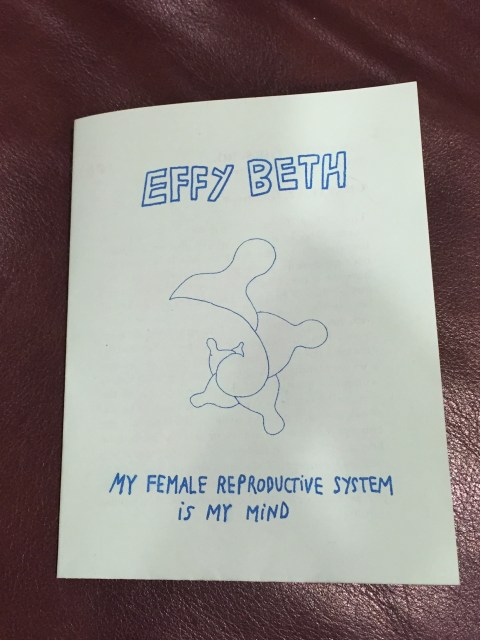 Effy Beth, My Female Reproductive System Is My Mind

Vaccaro, a postdoctoral gender studies fellow at Indiana University and a research fellow at the Kinsey Archives, picked some of the archival selections with students while teaching a queer archives class. For both Vaccaro and Gregory, placing the exhibition in a public space — rather than a commercial gallery — was crucial to their goal of public service.

“I’m really interested in what it means for people to access this kind of history, to kind of bring the archives out of the ivory tower and put it into dialogue with contemporary art and activism,” Vaccaro says.

It’s this collocation that makes the relatively small space one you could spend hours in, thumbing through documents and drawings connecting lines “between archives and aesthetics,” as the exhibition title puts it. The works keep a grasp on you even as you exit the gallery, where spillover selections from Flawless Sabrina’s archives and the clip from Zachary Drucker’s Southern for Pussy invite you to pause and take in just a little more before you make it back up the stairs.

“Bring Your Own Body: transgender between archives and aesthetics” is on display now through Nov. 14 at the 41 Cooper Gallery at the Cooper Union School of Art in New York City. The ongoing exhibition is open Tuesday through Saturday, 11 a.m. to 6 p.m. Live programs are scheduled for Oct. 29, Nov. 4-5 and Nov. 14.