The legendary David Bowie has a new music video and single, “The Stars (Are Out Tonight)“. The music video, directed by Floria Sigismondi (writer and director of The Runaways as well as countless other amazing music videos), begins in a similar fashion to an awesomely bad 80s movie. It then progresses on to be something so fantastically strange that even without Bowie starring and singing, you’d think he had a part in making it. 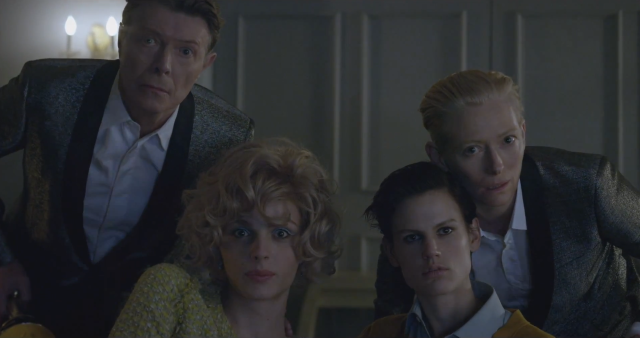 via {We All Want Someone}

I think David Bowie chose Tilda Swinton to be in this video to prove that they are, in fact, two different people, but she’s a welcome addition and really rocks that crazy eyeliner and fluorescent workout suit. The video then goes on to have some creepy starlets, played by Andrej Pejic and Saskia De Brauw, chasing around Bowie and Swinton and eventually possessing them. The androgyny and gender play in this video is so great and even includes a female version of young Bowie. I can’t be sure, but is that a lesbian sex scene?

What do you think of it: Weird? Genius? Weirdly genius? Excited to see what’s on the rest of Bowie’s new album, The Next Day?