The prevailing attitude I saw after the first preview for the new R-Rated comedy Blockers was one of heavy eye-rolling. People on social media immediately started critiquing the film’s main characters and concept for slut shaming, infantalizing their daughters and other misogynistic and anti-sex behavior. This criticism of the main characters was right on, and in a wonderful and surprising turn was very much the real message of the movie. While Blockers hits a lot of the same notes as most other raunchy teen comedies, this one also spends a lot of time breaking down the damaging beliefs and behaviors that are so prevalent in the genre and the beliefs it looked like were going to bog this one down especially.

This post has light spoilers for the movie Blockers

Blockers follows three parents — played by Leslie Mann, John Cena and Ike Barinholtz — who find out their daughters (Kathryn Newton, Geraldine Viswanathan and Gideon Aldon) have made a pact to lose their virginity on prom night and come up with a plan to stop the girls from having sex. That sounds terrible, right? It sounds like it’s going to be full of slut-shaming; the types of misogyny that say boys should lose their virginity early while girls should never lose theirs; fathers acting as if they have ownership over their daughters bodies; and loads of other terrible things. For a while, it does have those things. John Cena absolutely wants to “protect his daughter’s purity” and guard her from her “dangerous” date. Leslie Mann does want to stop her daughter from having sex because she says she knows what’s best for her and that she isn’t ready. But those attitudes are immediately challenged as soon as they come up.

Sometimes, the movie gets so far into explaining all the problems with the parent’s plans that it almost becomes a lecture on women’s empowerment and the absurdity of the whole concept of virginity and girl’s ownership of their own bodies. It always avoids that, though, and keeps it’s hilarious edge. Blockers calls out sexist double standards and repeatedly points out how old-fashioned and out of touch the parents are for wanting to stop their daughters from having sex. It focuses on female desire and agency. This movie is the counterargument to all the straight male comedians who say there’s nothing funny about feminism. It’s full of jokes about the patriarchy and regressive sexual attitudes, and that’s a great look for the future of comedy. 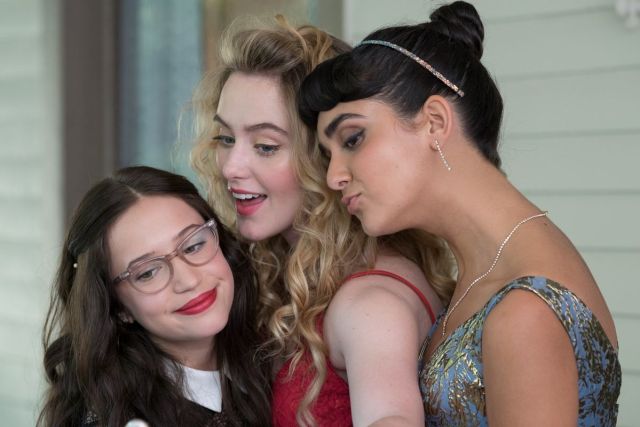 Blockers really shines when it focuses on the daughters. All three have different motivations to lose their virginity, and none of them are shamed by the film for wanting sex. They’re their own people with their own sexual desires. These girls are in charge of their sexuality and they’re not being pressured or led around by boys. They’re not characterless sex objects who only exist for boys to fuck. They’re not chaste, nonsexual beings to act as foils for the oversexed boys. They’re some of my favorite teen girl characters in a long time.

Oh, did I forget to mention that one of the three daughters is gay? Yep, there’s a whole story line in this movie about a high school girl coming out; in fact, a third of the movie focuses on her story. Even better, the story is really cute and nerdy and it’s done really well! These lesbians are adorable and they’re supported by the people they talk to about their sexuality; it’s actually one of the happiest gay story lines I’ve seen in a movie. It’s rare that a high school movie gives audiences a chance to root for one of the main girl characters to get another girl, but that’s exactly what this movie does. It’s a good feeling to see that in a movie theater. It’s a great feeling.

I think a lot of the credit for Blockers turning the regressive tropes of the raunchy comedy genre on their head goes to director Kay Cannon, the woman most famous for writing the Pitch Perfect films. She’s succeeded where so many male directors have failed and made the perfect high school sex comedy. Do you see what can happen when women get to make movies? Blockers made $20 million in it’s opening weekend, and I’m guessing a huge audience of women hasn’t seen it. Let’s change that and make this queer and sex-positive comedy the hit it deserves to be.