Hey there, everyone! I missed you! How was the end to your Black History Month? Are you ready to welcome Spring and longer daylight hours? (Just five days left until we get to move the clocks!) Most importantly, are you ready to thunder bolt shake clap some comic book villains? I sure hope so!

Since we haven’t seen each other in almost a month, here’s a recap: Jennifer Pierce is back with her family and ready to embrace her superpowers, largely because she wants to kill Tobias Whale for killing Khalil, but listen – Tobias like really needs to die, so I’m fully prepared to support this plan. Grace Choi has run away out of Anissa’s arms and out of Freeland altogether, plus it turns out that her name isn’t really Grace Choi at all! She’s Shay Li Wylde, a survivor of a human sex trafficking ring. That is both obviously devastating and surprisingly accurate to Grace Choi’s origin story in The Outsiders comics. Anissa is on the search to find her and hopefully one day #ThunderGrace will get the respect they deserve from this show (hey! A girl can hope!). Mama Bear Lynn Pierce might be in over her head with her shady ASA boss Agent Odell. Tobias Whale has assembled a truly impressive line-up of baddies and the Markovians are coming!

OK! You’re all caught up! Now we can hit the ground running!

I’d like to start with: HOW THE HELL IS LALA BACK FROM THE DEAD AGAIN?!?!? ARE YOU SERIOUS RIGHT NOW?? The former captain of the One Hundred gang was first choked to death by Tobias. Then he was brought back to life as a loose interpretation of the DC Comic’s “Tattooed Man” – a villain with the party trick of having those he once killed talk to him as ghosts and then become tattoos on his body. Then Lala died again!! This time as a suicide bomber who blew himself to bits in an ASA interrogation room while under Tobias’ control. So when this dude showed up a third time, I nearly flipped a table.

Let me get this straight – Jill Scott, AKA Lady Eve AKA the Queen of the Dead who ran her own freakin’ mortuary, can’t even be resurrected from one measly death but Lala has now been brought back TWICE?? What, are the women the only ones who stay murdered on this show?

ANYWAY, Zombie Lala is back again and this time he’s haunting Jefferson over at Garfield over a student murder orchestrated by Tobias that happened at least 10 or 15 years ago. Yes, it’s as convoluted as it sounds.

Surprisingly though, I didn’t hate it? Zombie Lala has gotten more interesting in this latest re-incarnation, he’s out here quoting Zadie Smith and I do love me a supervillain that’s well-read in contemporary black women’s literature. Plus – and this was a massive Easter egg that sent me to bed with the biggest smile on my face! I’m still not over it! – the Dr. Frankenstein to Zombie Lala’s monster? It’s none other than black 1990s film great Michael Wright. Better known as Eddie King (err, excuse me, Eddie the KAAAAANG) of The Five Heartbeats.

You should definitely see The Five Heartbeats if you haven’t. It’s Robert Townsend’s 1991 dramatic parody of 1960s Motown Era groups like The Temptations or The Four Tops. The movie is funny and sweet and surprisingly moving and so quotable that I easily lose myself in it. If you’re black and currently between your mid-20s to mid-30s, chances are high that you grew up watching reruns of the movie on BET more often than you can count. (It also got a surprising shout out in last week’s Boomerang, also on BET!) With the appearance of Eddie KAANG, that makes two of the five Heartbeats as Black Lightning reoccurring characters! (Robert Townsend, as you’ll recall, has appeared as Dr. Napier Frank – Jefferson’s confidante and a member of Garfield’s school board. The iconic director has also directed episodes of the show).

OK. My geek-out over ‘90s black culture aside, Zombie Lala’s haunting of Jefferson took up a lot of screen time this week with little direct pay-off, other than Lala’s confirmation of being on team #TobiasMustDie, which is always welcome. Moving on!

Anissa is more convinced than ever that Grace is in mortal danger. With Jennifer’s encouragement (which makes no sense since just last episode Jennifer seemed to have no more than a passing interest in Grace, and told her big sister that her girlfriend most likely just ghosted her, but WHATEVER!), Anissa decides to take her investigation to the next level. She finds the last known address of Grace’s foster brother and picks up the search there. An older Asian man answers the door, apparently the smell is repugnant, and warns Anissa that “Trouble will find you if you do not leave this place.” Anissa bangs on the door, heartbroken and frustrated, begging to know if Grace is safe, but it’s it won’t open again. 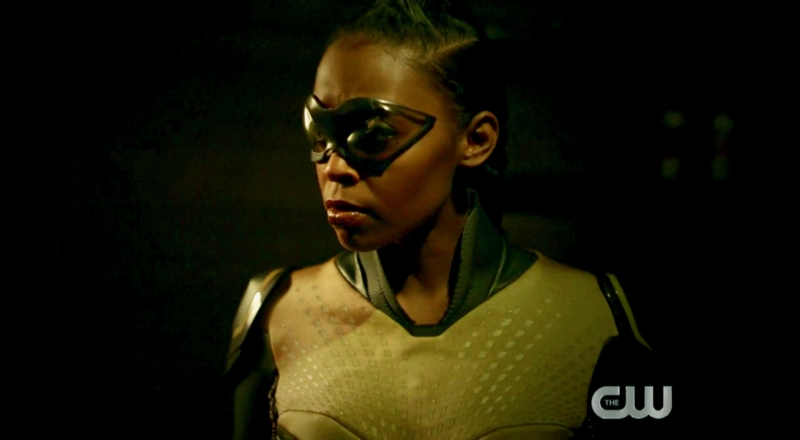 Anissa returns, this time fully suited up, and breaks down the door with her feet. She discovers the source of that smell – an open, decaying corpse of a deer (or a horse? I’ll keep it real with you, I had to close my eyes and couldn’t tell). The older Asian man shows up again and starts to promptly KICK ANISSA’S ASS!

Do you know how rare it is for Anissa to meet her match in a fight? This dude is everywhere! He’s meeting her punch for punch, he’s literally walking on walls, you name it! I also appreciate that more than once he took a more traditional fighting stance that comes from Asian cultures (I don’t know the specific fighting style, and wouldn’t want to misspeak or misappropriate, but the detail was important and I’m thankful Black Lightning took care).

 
The fight ends when Anissa throws an entire whole couch on ol’ boy and he jumps out of a window before she can get a good look at him.

Why does that matter, you ask? BECAUSE THAT OLDER ASIAN MAN WAS GRACE CHOI ALL ALONG! That’s right! We have our first confirmation of Grace Choi’s superpowers, and my girl is a shapeshifter!! It’s a welcome change from the comics (Grace’s powers are traditionally more of the vague “super strength” variety) that gives an infinite array of awesome possibilities for her character moving forward. I’m still a little concerned about whatever is going on with the dead animal, but I’m also hyped that Grace has become so interesting and layered! I cannot freaking wait!

This is maybe going to sound strange, but I’m also glad at the show’s decision to not make Grace easy for Anissa to find. They deserve the same kind of character development and time that was given to Jennifer and Khalil earlier in the season. As long as we continue moving forward, which this week definitely did, I don’t mind getting to know Grace this way. I don’t mind seeing Anissa having to finally work for it. That’s how you build up characters and – Finally! Hopefully! – properly develop story. For me, taking Grace Choi seriously for once is worth the payoff of a delayed ThunderGrace reunion.

Granted, I don’t love that Anissa’s first takeaway from this leg of the search was “how much baggage is too much to deal with?” As if Anissa’s commitment-phobic self isn’t at least 50% of the problem with her relationship to Grace to begin with! And you want to talk about baggage? YOU ARE HUNTED DOWN BY VILLAINS EVERY DAY! Luckily, her family fixes that mindset for her quickly.

Also – and this didn’t occur to me until far after the adrenaline pumping fight – but Grace probably now knows that Anissa is Thunder!!! Right?!? She must. We know that Grace reads the Thunder and Black Lightning comics from her bookstore. She knows what Anissa’s voice sounds like. She knows that Anissa first came to the door of her hideout, followed by Thunder hot on her tails. I’m thinking that must add up to something! 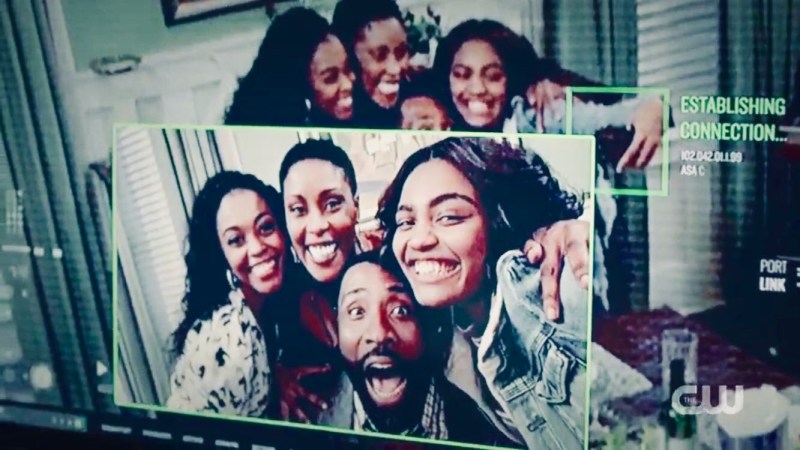 To wrap it up with some other Pierce girl news, Jennifer is this close to getting her own superhero suit! The playful, maybe a little vain, completely loveable and infectious perfect teenager Jennifer Pierce is back in full effect! I MISSED HER! She wants her suit to be more in the line of something Rihanna might wear on her next album cover. Lynn and Gambi want her to be safe. Who am I to judge, but I think there’s room for both? (This side plot comes with a delightful sight gag of Jefferson’s original super suit from the 1970s Black Lightning comics and a George Clinton reference. PERFECTION.)

Also not to be forgotten, Agent Odell has been apparently spying on the Pierces this whole time with high tech super-secret spy cameras! He’s confirmed they’re a family of superheroes, and upon confirmation, he shoots every other agent with that knowledge dead on the spot! I have no idea what’s happening there, but I think we can all agree that it’s not good news.

PS: Did you nerds get your Captain Marvel tickets for this weekend? If not, you should probably get on that.