In their greatest shout out to date, this week’s Black Lightning gave us a perspective of Freeland from a different kind of resident — the black community staple, your local bootleg man.

Now blackness is not a monolith, so everybody’s bootleg man works a little differently. When I was a kid, our bootleg man used to show up in the beauty shop on Saturday mornings. He’d offer burned DVDs of old Tyler Perry plays and still in the theater blockbusters to the women waiting to get their hair laid. He always had personalized mixtapes for the teenagers. You could buy them for five dollars each, or three for $10. In my cousins’ neighborhood, the bootleg man worked on the corner outside of the mattress store, across from the Applebees. He specialized in radio mixes, plain cotton sweats and tees, along with off brand Jordans and sparkly hair clips. In Florida, my friend’s bootleg man used to sell infant formula out of the trunk of his car, along with cigarettes and candy bars for the kids. My bootleg man may not be yours, but if you grew up in a predominately black neighborhood, chances are that you got one. 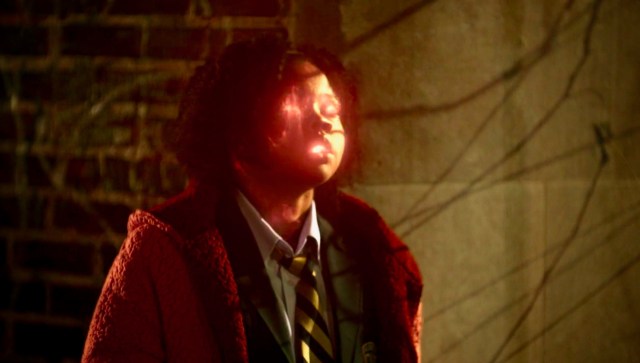 When folks say “it’s lit!”, I don’t think they mean this.

Freeland’s bootleg man is a dreadlocked, hoodie wearing guy who goes by Two Bits. While wrapping up his nightly sale, Two Bits spies a tween buying some Green Light on the street from some dude named Ray-Ray. One inhale and she lights up into a literal fire, kind of like our very own Jennifer Pierce, and before we can even deal with that new bit of information, she’s whisked away by two ASA agents into a van in the middle of the night. Two Bits screams after van, but it’s two late. Another black girl gone missing. 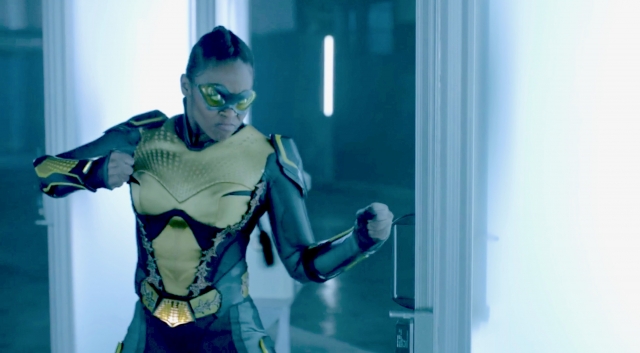 Let’s Get Ready to Rumble!!

That same night, Jennifer is doing a little Thunder exploration into Gambi’s story from last week. Gambi had seen the dead bodies of the abducted super powered black kids from 30 years ago. He implored Anissa to tell Jefferson so he could investigate, but she’s decided to handle the matter on her own instead. She now realizes that the bodies being kept in these liquid filled pods are not dead at all — they have a pulse!! They’ve been left in stasis! She’s horrified! All of these vulnerable black bodies, left alone for 30 years, being experimented on. It’s awful. Her first instinct is to Thunder quake open the pods, but she worries that it will only make the situation worse. Instead she goes home to recruit extra help.

Throughout the opening sequence, Mick Jenkins croons over a sparse beat in the background, “I Can’t Breathe.” I’ve discussed earlier in these recaps that one of my favorite pieces of Black Lightning lore is that Anissa Pierce, a black lesbian superhero and established Black Lives Matter activist, triggers her power by controlling her breath. Anissa’s first deep breath connected me to the death of Eric Garner, who died begging that he couldn’t breathe. Her Thunder theme song, premiered last week, name checked Eric’s daughter, Erica, a Black Lives Matter activist who died just this winter. Once again, with this music choice, Black Lightning centers itself on this theme. The air surrounding our little superhero tale is thick, heavy with the cruelty of America — No, we can’t breathe.

Anissa gets Jefferson to go back to the lab with her, but by the time they get there the bodies have already been moved. It becomes clear that they’ve walked into an ASA trap, and they work together to get out alive. As an aside, ANISSA CAN WALK THROUGH BRICK WALLS NOW. I love her.

Meanwhile, Zombie Lala is hanging out in nightclubs reading Egyptian Book of the Dead by E.A. Wallis Budge and talking ‘bout how “ain’t no such thing as death”. He’s speaking to the figment of his imagination once known as beanpole drug dealer Will, a man who Lala definitely already killed early in the series. All I’m saying is, if there’s no such thing as death, then the first person I want back is Lady Eve. Budge is a controversial historical figure. He was considered an expert on ancient Egyptian religion, but history has revealed him to be the kind of white colonist who stole artifacts and became rich off of Africa’s resources (Spoiler Alert: They all did that). He specialized in Egyptian beliefs of the afterlife, spirits, and hauntings — which is why I assume he’s piqued Lala’s interest.

Lala’s crew is thoroughly freaked out by his zombie state and his new propensity for talking to himself. One of them accuse Zombie Lala of slipping, so he rips out that dude’s ear off clear from his head and then shoots him to death! So, I guess we won’t be having problems like that anymore.

Also, Zombie Lala puts his own mother’s life on the line as collateral so that he can a buy a Costco bulk amount of cocaine and marijuana to sell on the streets. I know he’s already dead, but damn I am so ready for him to die again. How do you kill a zombie? Let a sista know in the comments.

Two Bits goes to Jefferson to talk about the young girl we saw abducted in the opening sequence. He realized that the girl was one of Jefferson’s students because “she was wearing one of those ugly ass uniforms y’all be making them wear” — sounds legit to me. Two Bits has done a lot of illegal activity he’s not necessarily proud of, but there’s a line between wrong and wrong. Abducting little girls in the middle of the night is on the other side of that moral code. 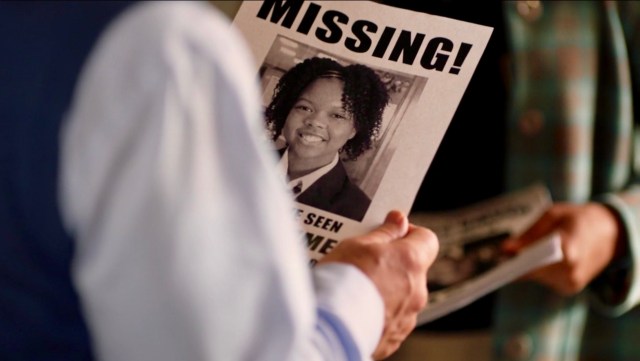 We’ve talked about this before, but if you want to learn more how to help in the search for missing black children, you can start here.

Jefferson’s worried. If super powered black teenagers are being picked up off the streets again, then Jennifer needs to stay home from school.

In a parallel plot line, Neema (the girl who was abducted)’s best friend has been pounding pavement, putting up Missing Posters and asking local business owners for help. She runs in to Gambi, who much like Jefferson, realizes it’s starting all over again. Green Light is turning kids into meta humans, just like the vaccine he pushed all those years ago. It’s purposeful. The ASA are rounding them up to fill out their own sinister agenda.

Anissa and Jennifer go at it for another round at home. It’s the ugliest fight I have ever seen from the Pierce Sisters thus far. Anissa still wants Jennifer to think of her powers as a blessing; she can’t fathom why her little sister sees them only as a burden. I love Anissa so much, but she’s really pushing it. It’s great that she went 100% in on this superhero thing, but it’s also ok that Jennifer needs more time to come to terms with it. This is an abrupt life change of magnificent proportion. She doesn’t need to have Anissa’s priorities. Anyway, Jennifer is still a kid. She has a right to the future life that she wants to live.

Anissa reaches for the low blow and tells Jennifer that she quit on Khalil. It’s a lie, and Kahlil is working with Tobias on #TeamVillain now anyway, but when confronted on it Anissa doubles down. It’s awful. Jennifer loses control of her emotions and her entire body — clothes and all— go into electric flames!

It’s really freaking cool, but understandably the Pierce Sisters don’t see it that way. They take Jennifer to Lynn’s lab for testing. Lynn discovers that Jennifer’s powers differ from Jefferson’s in an important way; while Jefferson’s body functions like a battery — absorbing energy — Jennifer’s functions as a generator. She creates energy within herself. Her every cell is, quite literally, lit. This makes her more powerful than Jefferson, and I think most powerful of all three Pierces. 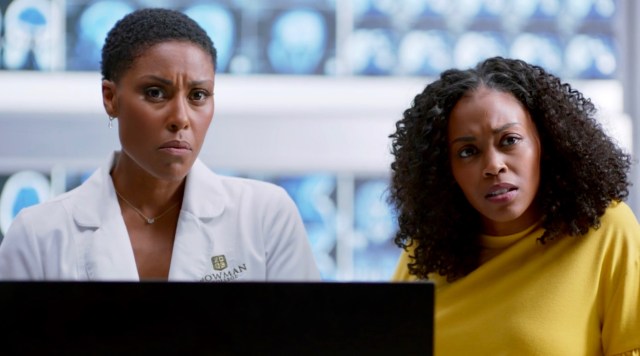 Black Lightning pays a visit to Two Bits to help track down the pods with the missing super powered kids in them. Like any good hustler, there isn’t a delivery truck coming in or out of Freeland that Two Bits isn’t keeping track of. Black Lightning busts him on a little light weed smoking, which seems a little unfair if you ask me, but uses it for leverage to find out about the trucks. In the middle of the interrogation, a microwave comes sailing through the air! Then a television! There’s a huge reward for capturing Black Lightning, and the block is H-O-T.

The ASA comes to pay Gambi a visit, but he’s ready for them. He has two guns blazing. It’s not enough. He ends up getting tortured and water boarded until he’s willing to confess who is Black Lightning. Of course, he won’t give it up.

I am not heartless. I’m sad Gambi got so brutally tortured, I really am, but I don’t see myself being empathetic to him anytime soon. Torture sucks, but he also tried to exterminate an entire generation of black people in this country. Sooooo, shrug emoji. Anyway, Jefferson saves him and ends up outing himself as Black Lightning in the process. It was all for nothing.

With the ASA on their collective trail, and the streets willing to trade his body for a reward, Jefferson decides to put his family officially into hiding. He takes them to Graddaddy Pierce’s old house. You know — the one he was murdered in. It’s for sure haunted. Jennifer sums it up best, “This place smells like neglect. The dust is older than I am.” Times, they are bleak. 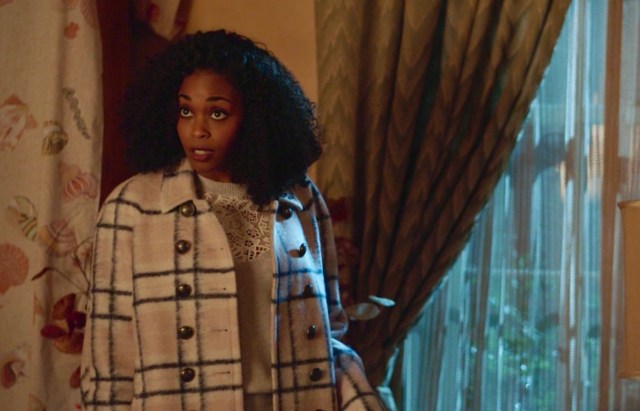 Do you know where else no one would find me? At Grace Choi’s house.

And guess who’s now in charge of eliminating Black Lightning? Who has been feeding the ASA with all this new information about super powered children? Jefferson’s Vice Principal from the high school!

GASP! The Judas!!!! It’s always the quiet ones.

That’s it for us this week loves. I miss Grace Choi every single day, but I am happy that we are getting to experience this one-of-a-kind show together! Speaking of one-of-a-kind shows, if you haven’t seen it yet, can I recommend taking some time this week to stream One Day at a Time on Netflix? You obviously don’t have to, but it’s sweet and feminist and funny. It just got renewed for a third season and I’m still not over it! Best news of the week, and I want us to celebrate together!