A lot the questions accompany the theories surrounding the Record Store Gays, or as the screenplay initially describes them, TWO SHORT-HAIRED WOMEN. (Later, the screenplay explicitly marks them as “New York lesbians,” so please choose your fighter.) Questions like: What was their purpose within the script? What does it tell us about Therese in that moment? What does it tell us about Therese going forward? About Therese before? Did they have to have one of them pose like that? Are they hitting on Therese or are they letting her know they know? Are they even real? Did Therese imagine them? What, basically, are we to make of them?

They are a mystery. And maybe that’s the point of their role! They – these shorthaired, New York lesbians – are everything and nothing that we think they are. But that shouldn’t stop us from investigating further. In fact, it feels like we are given a clue for that very reason. What is it? Well, it’s June Christy! 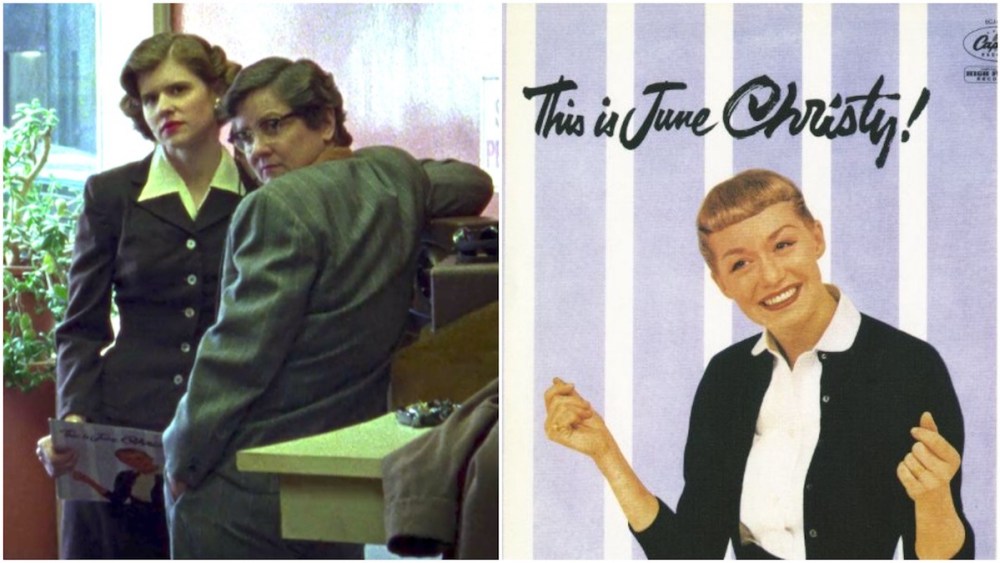 That’s not all. June Christy was born Shirley Luster (I mean this is an incredible name why). Therese is buying Carol a Christmas present. If you look at December to June as a forward processing of time – which I’m choosing to do as it supports my argument – everything is deliberately pointing to the future.

Stay with me. Let’s take a look at the song list.

“My Heart Belongs To Only You”
The first time Carol and Therese drive together, Jo Stafford’s “You Belong to Me” plays.

“You Took Advantage Of Me”
TOMMY.

“Why Do You Have To Go Home”
And leave me with Abby.

“Bei Mir Bist Du Schon (To Me You Are Beautiful)”
Dearest…

“Until The Real Thing Comes Along”
“I should have told her to wait.”

“I Never Wanna Look Into Those Eyes Again”
Richard at the party.

Of course: Therese and Carol’s whole story reflected back at us.

It all makes sense. Therese had just met an alternate version of herself and Carol as time traveling lesbians. Flung out of space wasn’t an endearment, it was a warning from their future selves, just like the record was. They tried to stop the eventual heartbreak from happening on two separate occasions, but it all got lost in the haze.

The detail here – just wow. A film for the ages. Every one of them.