Last week’s edition of The Lesbian Stereotypes Survey created a holy space to discuss your religious affiliations, and this week we’re talking about a somewhat related topic: astrology.

It’s considered an established fact that queer women and non-binary are obsessed with astrology — and browsing instagram, lesbian memes or any number of dating apps will likely confirm this assumption. Furthermore, there’s been a certified surge in astrological interest in general since the 2016 election, especially amongst millennials, and millennials are a very gay generation.

According to writer Sascha Cohen, the connection between queers and astrology goes back to the 1960s, “when the emerging women’s and gay liberation movements overlapped with a growing interest in New Age spirituality,” and many feminists left their patriarchal, monotheistic religions for various ideations of Paganism. Gay astrologer Christopher Renstorm says it goes back even further than that: to Ptolemy, whose work centered on the relationship between planetary behavior and sexual behavior, thus eternally optimizing astrology as “non-prescriptive and inclusive.” Famed queer astrologer Chani Nichols, in a post on Why Queers Love Astrology, presents several theories, including “maybe it’s because we understand that our identities come in as many variations as there are stars in the night sky.” At a Queer Astrology Conference in New Orleans, Broadly talked to a witch/astrologer who argued, “For me, astrology has always been a tool of liberation, and queer theory likewise seeks to liberate people from the language of oppression.” In The New York Times, Krista Burton (of Effing Dykes Fame) asks if astrology is religion for those of us without religion (and as we learned two weeks ago, a lot of queers are without religion), but concludes it’s really just a reflection of “millennials… acknowledging that the current system isn’t working.” We’re also just, you know, people — and this Smithsonian article offers a good overview of why people, in general, believe in astrology.

Anyhow, here’s a surprise to everybody: lesbian, bisexual and queer women and non-binary people don’t believe in astrology at significantly higher rates than the population-at-large! 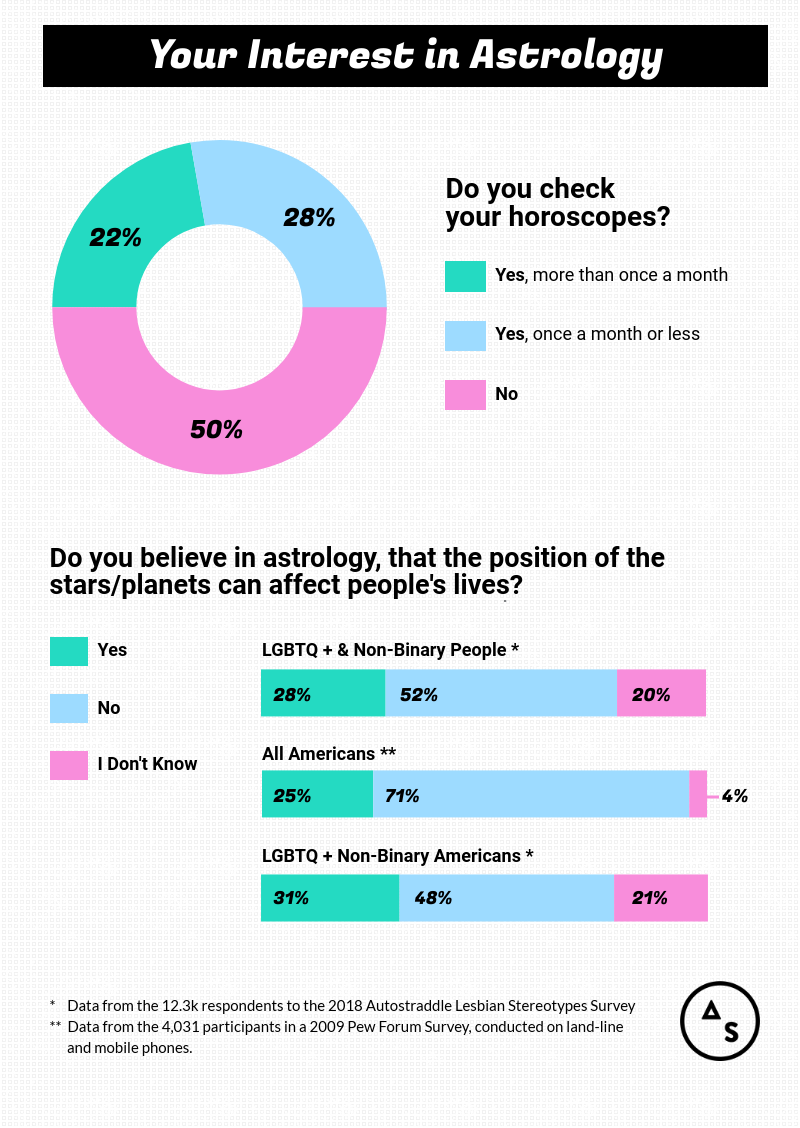 Weird, right? And that’s comparing our data — LGBTQ+ people in the year 2018 who are overwhelmingly not members of organized monotheistic religions of whom 79% are between the ages of 18-34 — to a mixed-age group of people surveyed by Pew on this topic in 2009. Furthermore, Pew noted in their survey discussion that “these beliefs are more common among Democrats and independents than Republicans and are more widely held by liberals and moderates than conservatives,” and our group is 98% Democrats and Independents. FURTHERMORE FURTHERMORE, our group is mostly women, and women are more likely than men to be into astrology.

However — we do not NOT believe in astrology less than the population-at-large. We have way less outright non-believers than the entire country — because 20% of y’all don’t know if astrology is real or not, compared to 4% of all Americans. Our survey also asked for your Zodiac sign, and I found that all signs had approximately equal interest in astrology, except Saggitarians, who are a bit less likely than other signs to believe or to check their horoscopes.

Although I believe in magic, psychic abilities, ghosts and all kinds of wacky universal forces, astrology’s never been my thing. Due to immense amounts of 1) peer pressure and 2) people talking about “Gemini Season,” I recently caved and have developed a minor affection for it, although I’m aware a lot of queers who aren’t into it are profoundly annoyed by those who are, and many scientists feel belief in astrology is genuinely damaging.

So, come my friends, and let’s take a look at why people believe or don’t, according to insights garnered form the 949 “comments” left in the comment box below the question.

The comments for the YES group contained a lot of “kinda”s or variants on “but I’m skeptical” or “but just for fun” — but it’s likely that there’s a very strong overlap between “people who only kinda believe” and “people who left comments,” so their prevalence don’t necessarily represent the entire Yes group.

Others cited a general belief in various physical realities that suggested metaphysical possibilities — ideas like “all living things have energy,” “the moon affects the water on earth and our bodies are 70% water,” “the moon has been scientifically proven to have effects on a person’s state of mind” and “if the moon’s magnetic pull influences the tides, why wouldn’t it influence walking bags of water, metal and dust?”

Another said, “I mean, I believe that astrology is an ancient knowledge system, like tarot or numerology, that has its own validity & usefulness as a lens for understanding psychology and human interactions.”

Then there were comments like these, from those who believe because astrology just consistently checks out:

Others mentioned different types of astrology that they believed in rather than the Western system. Jyotisha, the traditional Hindu system of astrology, came up, which is sometimes also referred to as Vedic astrology, described by you as having “a very in-depth scientific process.” Chinese astrology was cited as being “surprisingly accurate for me” whereas “Western is bullshit.”

“I Don’t Know”: The Skeptics

In comments, the “don’t know” group mostly expressed affection for astrology despite not being sure of its veracity. They enjoyed the social aspect and its related memes, or valued it “like any system of personality typing” or as “an interesting lens into self-analysis.”

“Even if it were completely true or completely untrue, it doesn’t really matter to me,” wrote another skeptic. “I think there are a lot of takeaways from astrology, and I do use my horoscope as a way to move about my day mindfully, also I find it to be a fun way to connect with others.”

“I use astrology as a guide to help center and check in with myself,” wrote one. “I do believe it has merit but only as a vehicle to trick your mind into doing self care/ healing work. It’s not “true” or “science” and should be looked at with skepticism but that doesn’t mean it is invaluable.”

1. I don’t believe in it, but I enjoy it regardless / still feel it has some purpose / find it interesting

Highlights from Group 2 include:

Other interesting perspectives included astrology being “like taking a Bible as Literature Class,” the only possible implications of one’s birth month being “the sociological implications of how people celebrate birthdays by month” (which is an interesting thing to think about!) or a more anthropological take that made room for believers: “people’s relationship to culture/family/history is often tied up in ritual and symbolism that is at least partially outside their control, and their actions/views are inexorably linked to those intangible values and systems of understanding.”

Other Demographic Qualities of Believers

Religion: Atheists were, predictably, least likely to believe in astrology — only 12% do. Between 20-22% of Protestants, Jews, Muslims and Hindus believe. On the high end, we’ve got 69% of Wiccans, 40% of Buddhists and 28.5% of Unitarian Universalists and 28% of Catholics feeling strongly about the movement of the stars and planets. Pew found similar numbers — 21% of Protestants believing in astrology and 29% of Catholics.

Race: Pew found Black people and Latinx & Hispanic people believing in astrology at higher rates than white people — 29% and 35%, respectively, compared to 22% of white people. A 2003 Harris Poll found 47% of black Americans believing in astrology. On our survey, 45.4% of Black people, 42% of Latinx & Hispanic folks, 39% of American Indian or Alaskan Native respondents and 31% of mixed-race humans voted Yes for Astrology, compared to 27% of white people and 26% of Asian & Pacific Islanders.

Sexual Orientation: 38% of those who identified as “sexually fluid” believe in astrology, compared to 31% of queers, 28% of lesbians, 28% of pansexuals, 24% of bisexuals and 17.5% of homo/bi/panromantic folks.

Age: There was no statistically significant difference in belief by age.

So, Why Does It Seem Like Everybody Is Into Astrology If They Aren’t?

A few things are going on here — most notably, “being into astrology” and “believing in Astrology” turn out to be very different things. 27.8% of non-believers and 64% of “I don’t know”s check their horoscopes at least once a month. (I offered the “once a month or less” option ’cause I imagined many of you, like me, read the Autostraddle Horoscopes but nothing else, and comments suggested this was true — that was the most popular comment.)

Only 33% of survey respondents said that they don’t believe in astrology AND they never read horoscopes. But possibly that group would be much smaller if the Autostraddle Horoscopes did not exist.

Some of it might just be that we are more likely to notice the presence of something (astrological conversation) than an absence of it. Herstory Personals are often described as being astrology-heavy, so out of curiosity, I looked at all 336 ads they’ve posted within the past month — 39% include astrological references. That feels about right to me, but I’m curious if it surprises any of you.

It might be that artists, writers and other media-makers, who are often broadcasting their thoughts and feelings in public forums like twitter or this website, are more likely to be astrology fans, thus creating the concept that it’s prevalent in popular discourse.

In conclusion: Stars are really pretty!

Not True or False