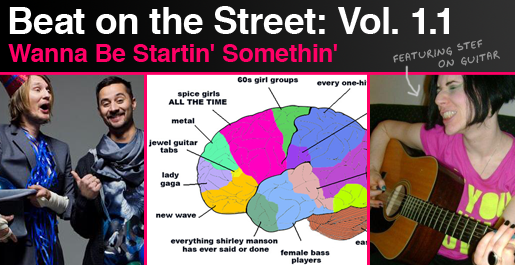 Intro to Stef. What is Totally Gay Music. Röyksopp. SXSW.

Hey guys! My name is Stef and this is “The Beat on the Street,” where I’ll be writing to you homos &  homo-allies about music every week or so (except um, this week, when you’ll hear from me a LOT — but more on that later). If there’s one thing the gays are particular about, it’s their tunes, so this is actually a really daunting task, but I feel like I may be uniquely qualified. I could list reasons why I believe this to be true, which would be boring, or I could show you this diagram of my brain, which would be both exciting and colorful! See: 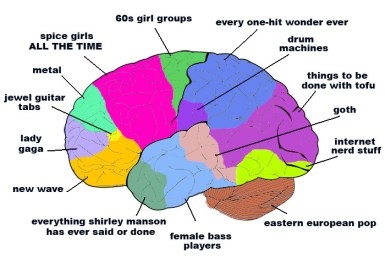 That being said/diagrammed, I initially found it a little odd that Riese and the team selected me for this position – basically because – deep breath – though I’d definitely describe my taste in music as totally gay, I’m not sure I’d describe myself that way.

It’s not that I have a problem with “girl-on-girl culture” – obviously if I’m writing for this site with its big purple banner, it’s hardly an issue (hello, ladies).  The truth is, I don’t identify myself as lesbian, straight, or even bisexual really – and this isn’t some self-loathing homo psychobabble, I just don’t really see myself as any of these things. I hadn’t really even thought about what “category” I fit into until a few years ago, at which point I decided labels made me uncomfortable anyway. See — for me, sexuality is arbitrary.  I like to reference that scene in Trainspotting when, after Begbie accidentally hooks up with a drag queen, Renton declares: “It’s all about aesthetics, and fuck all to do with morality.” 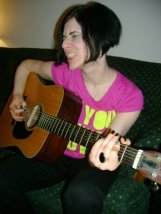 Similarly, I’ve never really subscribed to a single musical subculture either. Growing up, I flirted with everything from Jewel to drum’n’bass, owned t-shirts from Ozzfest and Lilith Fair and I’ve spent many years as a closeted Spice Girls obsessive. Since admitting my abiding love of bubblegum pop (and attending the Spice Girls reunion tour in full costume – twice), I’ve stopped believing in guilty pleasures — why not just enjoy it?

So now I shamelessly continue amassing an iTunes library stockpiled with eclectic music from nearly every genre, including everything from Loretta Lynn to Lithuanian synthpop, Romantic composers to Real McCoy, Pantera to Portishead and back around again. It’s pretty serious. I make intense mix CDs.

We’ll be talking about just about everything in this column, mostly new music as I encounter it – streaming new content, videos, precious bands with phased-out keyboards and asymmetrical haircuts. There’ll be interviews with some lovely musicians we all admire, and

I hope to cover shows happening in the greater NYC area with honesty, integrity and a certain amount of ridiculousness.

We’ll try on mirror masks with Lady Gaga, we’ll wax poetic about sensitive ladies with guitars, we’ll drool over hot throbbing synthpop, we’ll discuss Karen O and her sparkly feetie pajamas – we may even talk about GWAR. We’ll play it by ear.

Because I’m all over the place, I can’t help but think that trying to convince you of my homosexual musical preferences would be a little patronizing – we are all unique, like snowflakes. Let’s just say that I think we’ll get along just fine.

So back to the “more later” —  this coming week, we’re gonna get especially close, as I’ll be bringing you a near-constant stream of updates from SXSW in Austin, TX.  I’ve got some sweet interviews lined up, and I’ll also be reporting back about hot new bands I discover down south… and I can guarantee there’ll be a few drunken-shenanigan-related blind items.

This is my second year going to SXSW, and I know from my experiences last year that I shouldn’t overplan – but if there’s a certain band you guys want covered, hit me up on the contact page and let me know so I can check it out!  Are any of you guys going?  I’m always up for adventures (and aforementioned drunken shenanigans), and I’m super excited to be the first Autostraddle reporter “in the field.” I’m also quite stoked about sunflower tamales and AN ENTIRE STORE DEDICATED TO HOT SAUCE AND HOT SAUCE ONLY.

Here’s some stuff to check out in the meantime:

I want this column to be for all of us so I def want you to feel free to let me know what you think of what I think, what music you’re into right now — anything all over the map; if it’s happening, we’ll try to make it happen here. I approach music like I do everything in life — open minded, ready to discover new stuff and sans prejudgment.

Ultimately — it’s my total passion for what I’m writing about that places me solidly on common ground with Team Autostraddle.  I look forward to sharing that passion with you — and vice versa, if that’s what you’re into.

The next time you hear from me it’ll be LIVE and FREQUENT-ISH from the FRONT LINES of SXSW in Austin, TX!