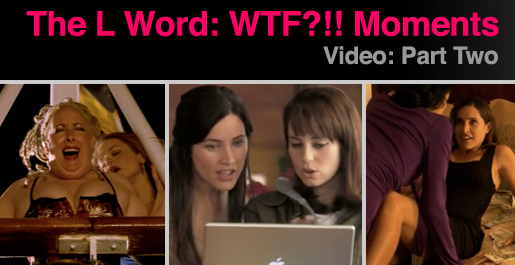 Zomg! Rememeber 25 days ago, when I posted The L Word WTF Part #1? Seems like just yesterday, doesn’t it? Dana died, Betty partied on, Papi had never been denied a lady … well, this here is Part Two of my opus masterpiece, best described 25 days ago:

“I had an idea to make a spectacular video encompassing every ridiculous WTF moment of TFS (this fucking show), The L Word. I described it with such enthusiasm “THE MUSIC BEGINS! And THEN! Bam!! -Max feels the baby kick BAM! – it’s Henry’s back fucking Tina – the music rises and BAM-BAM – Kit’s jive talking BAM! The Nanny gives Angus a Blow Job BAM! Jenny with the paper dolls–” that I completely convinced myself it was the best idea I’d ever had. Now that I’ve actually begun this endless undertaking, I’m more on the fence. Anyhow.”

Little did I know how lucky I was back then, still having all the ripest fruits at my disposal. I mean “Party on, Dana?” You can’t beat that. Sidenote: going through all these motherfrackin’ DVDs … did Ilene give Max ANY lines that didn’t include either the word “body” or the word “computer”? Sheesh. Flesh a brother out, I-effin-C.

But you sure can try!

Autostraddle Presents Part #2 of The L Word: WTF?!, celebrating all the moments of this fine program that made us embarrassed to explain it to our friends. Ready to take a little journey down Memory Lane to a time when Angus was too hot to be a papa, OurChart was SO much fun, no one understood Max and Phoebe Sparkle desired BETTY’s pleasure? All aboard!

And if you haven’t seen Part #1 already, here it is: