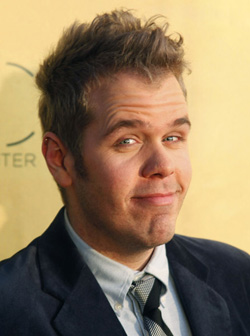 Last week I wrote this – If Perez Hilton Wants to Save Gay Teens from Gay Bullies, He Should Quit Being a Misogynistic Gay Bully.

Perez contacted me that morning in response to my piece and we exchanged a few emails in which I re-emphasized my point about what a difference Perez could make in the world if, in addition to his activism, he vowed to change his own behavior and stop being a bully himself. At the end of our exchange he still thought I was a giant douchebag and I still felt hopeful (more on that later on) and hoped he’d consider what I — and many other voices and even his own friends and Lady Gaga — had likely been saying to him for years.

“Be the change you want to see in the world, Perez Hilton.”

“Perez Hilton is doing a good thing by getting this message out there and being such an active activist. But we’re also troubled that once again, one of our loudest voices is an actively hypocritical one!

Tyler Clementi killed himself when his sexual encounter was made public online, a little trick that Hilton has essentially built his career on. And seriously Perez Hilton, for crying out loud, you cannot continue to be such a misogynistic bully and still claim that you truly want to stop gay bullying… You ARE a bully! YOU ARE A BULLY TRYING TO STOP BULLYING BUT STILL BEING A BULLY!

Listen: if Perez Hilton really truly wants to change life for gay teens, he could stand to take a good long look at the man in the mirror and ask himself to make a change.“

“Why do I think this matters? When you are asking people to change, it’s very important that you show them HOW to change. Set an example.

So Perez, I challenge you: You say it gets better? Get better. Set an example.”

I wrote that because I genuinely believe every word I wrote. I did legitimately want him to change his ways and be the change he wants to see in the world. I do think he can make a difference. And that’s why we’re amongst the many who were happy to hear him tell everyone today that he was going to change, even quoting a quote from our piece.

In other words, when Perez Hilton went on Ellen today and pledged to change, my head exploded.

He also made a video himself.

At the time, I was encouraged by other team members to re-publish my email exchange with Perez. But it just felt tacky, like it wasn’t going to help further the cause.

Now that he’s pledged his commitment to change, I want to share some of our little email convo because I think it’s important.

Perez emailed me the morning I published my post. His email reiterated his devotion to being a gay activist and expressed his dismay that other gay celebs weren’t working as hard to get the word out about the It Gets Better project and make a better world for gay teens:

From Perez Hilton, to me [excerpt]

Thanks for the “loathsome” article and the other one as well!

You know what is loathsome to ME?

He closed with this:

I am very flawed and far from perfect but at least I’m DOING something about this specific issue, putting aside everything else I do and what I do for a living – which I will not change.

He clearly ignored the entire point of my post, so I earnestly sat in a car heading north and emailed him back to let him know I commended his advocacy but that I thought it would make an even greater impact if he changed his ways.

A piece of the email from Me to Perez Hilton:

Can you imagine what kind of impact you could make if, in addition to speaking out against bullying, you yourself made a commitment to not saying anything about another human that you wouldn’t want a bully to say to a young gay somewhere? We want the same things, Perez — a world where a lesbian walking down a high school hallway wouldn’t be called “lezLo” or “saMANtha” and nobody would ever use the word “cocksucker” towards another human being, no matter what. You have such reach, such impact, and such obvious compassion for these issues.

People visit your site for fresh, fast, funny celeb gossip and I don’t think you need the fat jokes and deragatory language towards women to do what you do. You already told those jokes, there are plenty more interesting jokes to be told. Why put that kind of talk out there in the world, you know?

I’m willing to bet that if you declared that you would start treating people the way you want gay kids to be treated, you could really change the world in exactly the way that I know you want to — I see how hard you’re working to get everyone to participate in the itgetsbetter project and I see how you’re on top of the prop 8 and dadt news and I see you out there marching for our rights.

Perez Hilton responded to me:

I have reconciled the dichotomies which come with what I do for a living and who I am as a person. That is not an issue I struggle with, but thank you for your “loathsome” concern.
x

I responded to Perez:

Also goddamn you are a fast reader or else did not really read my email or my post.

Anyhow. Thanks for all that you do!

And that, I thought (unfortunately), was that.

Then today happened and Perez told OUT Magazine some things and on The Ellen Show he basically explained my post to Ellen, which was sort of surreal, but also totally egocentric and possibly inappropriate/unjustified. But ultimately, that wasn’t the point for me anyhow, you know? Which is weird. Anyhow here’s Perez in OUT Magazine:

In trying to raise awareness and do everything I possibly could to help the issue of bullying and teen suicides, I saw that so many people were calling me a hypocrite and calling me a big bully myself. And sure, it’s to be expected and OK that will be what some people think but it felt like that was what the majority of people were thinking. And if that’s the case, I want to change that because that’s not who I am or it’s not who I want to be. I¹m still going to be sassy and critical but there’s a different way I can do that. I don’t have to call people names. I don’t have to out people.

We’re so happy. You did good today Perez. We’re getting better all the time.