Let me tell you something: If anyone ever says to me, “I was craving me some Heather” the way Miranda says to Che, “I was craving me some Che” in this episode of television, I hope they literally mean they want to bludgeon me in my heart with a spear me and cannibalize my dead body in a sacrament to a lesbian deer goddess — which is the plot of Yellowjackets, I believe — rather than meaning they simply want to hang out. Because “I was craving me some Che” is the worst thing I have ever heard in my entire life. Worse than the time A ran under Hanna Marin with her car and then sneaked into the hospital to sign her cast “My bad!” Worse than the time Sue Sylvester locked Kurt and Blaine in an elevator with that psychotic doll of herself riding a tricycle in the hopes that they’d get back together. Worse than that time when Serena van der Woodsen hired an actor to play her cousin and then her fake cousin started dating all her dads. WORSE THAN WHEN EMILY FIELDS STABBED HER DEAD GIRLFRIEND’S FAKE COUSIN ON TOP OF THAT LIGHTHOUSE. Worse than all fake cousins!

I was actually going to say, “I don’t even know where to start with this storyline this week” — but let’s start there. With Miranda craving her some Che.

No one, not even Che and Miranda, mention that Miranda left her husband of 15 years and hopped on a plane to Cleveland to chase down Che last week, or that en route she called Carrie and screamed, “I’M IN A ROM-COM.” 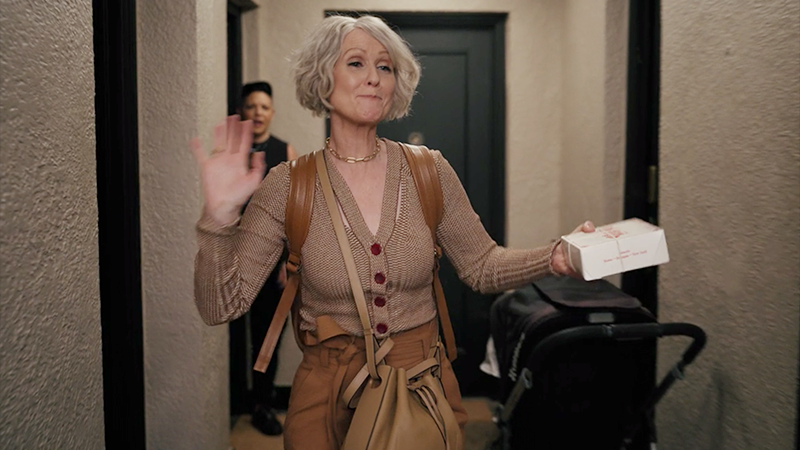 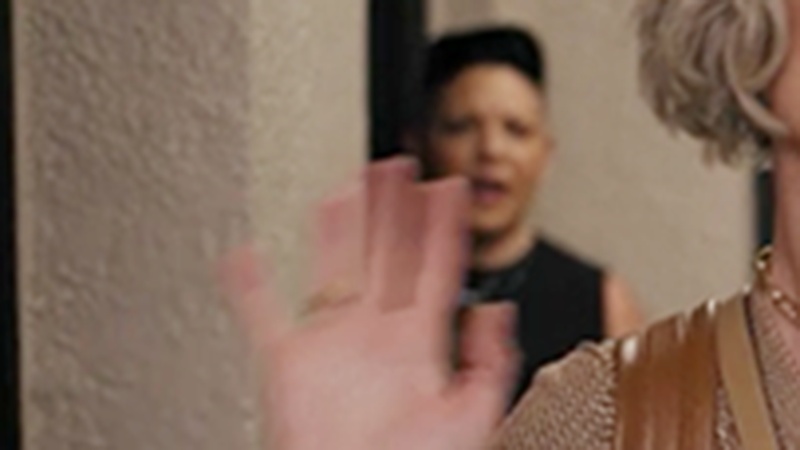 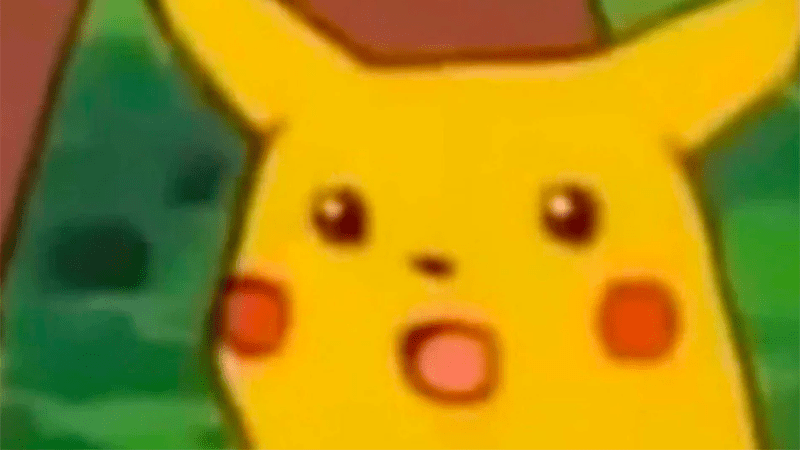 Apparently it went… okay? Because Che and Miranda are now going on dates at diners? However, despite that whole Ohio gesture, when Miranda shows up at Che’s apartment unannounced this week with cookies, calling herself Meg Ryan, Che’s kind of annoyed and Miranda is so mortified she unfurls her body down like three flights of stairs, cursing herself and her newfound lusty impetuousness. She firmly says that she is NOT in a rom-com, and also that she’s sorry she’s the worst, and also she did bring cookies, and also it was a boundary violation, and also she was just “craving me some Che.”

This is actually one of the few times we’ve seen Miranda and Che have an actual conversation, and maybe if they’d had multiple episodes of conversations, multiple episodes of flirty dates, maybe then they would make a little bit more sense. Miranda’s late-blooming queer mania makes sense. Che’s whole Che deal makes sense. (I keep seeing people say Che Diazes don’t exist, which is just the wildest thing in the world to me. It’s fine if you don’t like them, but, I mean, I know several Che Diazes. I was just talking to Stef Schwartz about this last night. Che Diazes are real! They are not cryptids! They walk among us!) But I just don’t buy Miranda and Che together. Sex? Yes. Diner dates? No. At one point, Miranda compliments Che by saying, like, “You look really, um, whatever is a good, non-gendered, non-objectifying way to say, you know, handsome or pretty or nice or sexy. I don’t want to offend you!”

Che asks Miranda to please come back upstairs, but Miranda just stays there in the foyer screeching about how it’s just fine — just totally fine!!!! — if Che is having sex with other people. Che says they are not sleeping with anyone but Miranda right now. HOWEVER. Che and Miranda are not dating, Miranda is not Che’s girlfriend, they are just “having fun” and “getting to know each other,” okay? Miranda says she’s fine with that too. SHE IS FINE. Che asks if Miranda will please leave the cookies, but Miranda will not leave the cookies, because the cookies are a metaphor — and so Miranda is going to withhold them. And also stop answering Che’s calls and texts immediately. Oh, she’ll still be checking her phone constantly, but Che won’t know. 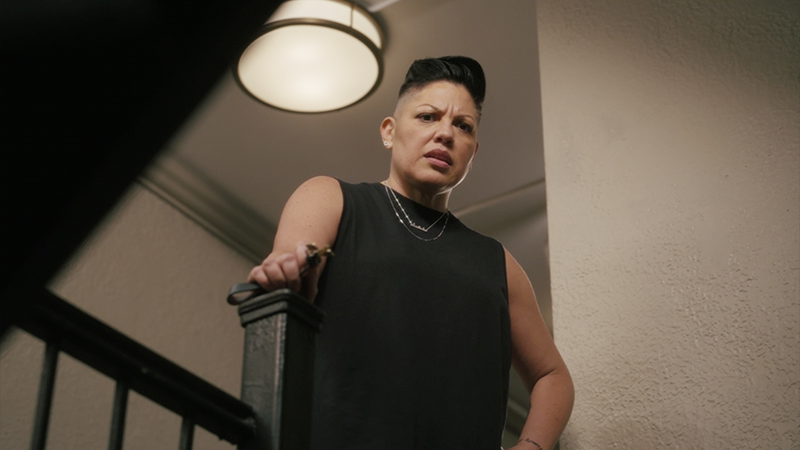 Actual dialogue: “Miranda, what the fuck?”

When Miranda tells Carrie this plan, Carrie’s brain goes whizzing back 20 years, and she feels completely baffled, once again, that dating turmoil is how Miranda is choosing to spend her fifties.

Steve, too, remains baffled. When he and Brady show up at the house-painting day for Dr. Nya Wallace’s women’s shelter — which is either in Greenpoint of Fort Greene, which are not the same place, but the characters keep using their names interchangeably — he volunteers to work with Carrie. When they get alone, he immediately launches into an investigation of the what, when, and where of Che Diaz. The problem with this scene is that while Steve gets the pronouns right, he and Carrie keep calling Che a woman — as in, “Did you know Miranda wants to be with women?” — over and over and over. Carrie says she didn’t know Miranda is gay, and, in fact, in the original series she one time yelled I AM NOT GAY at a man in the park. Carrie doesn’t want to talk about this, and Steve gets it, but also, last week Miranda dropped the Che news on him and then hopped on a plane to Cleveland and hasn’t been heard from since, so he would really just like to have an answer or two to work with. Carrie starts physically backing away from him, then steps in a paint tray in some like ten-inch bedazzled heels, and then drops Big’s wedding ring down the drain when she’s trying to wash the paint off her completely insane shoes. And that’s why you always wear sneakers! 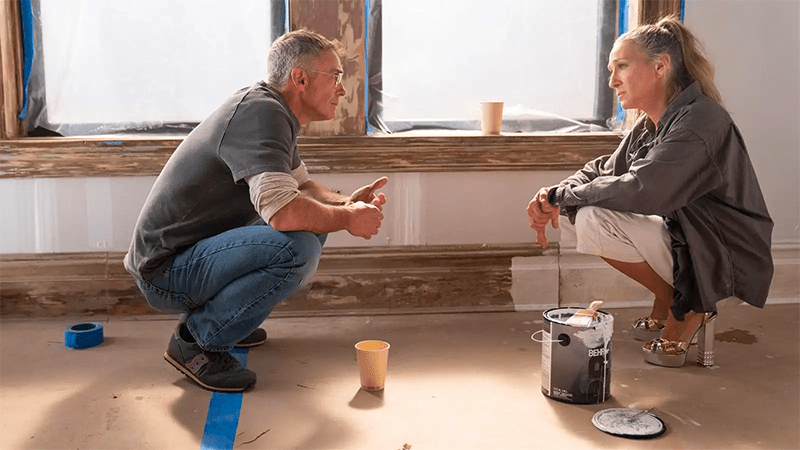 Steve, if I can hold this pose in these heels three months after having my hip replaced, anyone can do anything. You can even date again.

Steve finally backs off and just helps her get her ring back.

Also lost this week? Lily’s tampon string. (That was a masterful transition, you are correct, and I probably do deserve a Pulitzer for it.) See, Charlotte’s done getting her period. Finally! Menopause! But Lily’s just started with getting her period, and while she’s been reluctant to try wearing tampons, she’s decided to give it a go so she doesn’t miss out on her bestie’s pool party in the Hamptons. You know, just typical teen stuff. Charlotte lives for these bonding moments and puts an entire dinner party on hold to help Lily figure out the mechanics. It’s legitimately hilarious. Charlotte’s miming that Lily should push it sort of in and back, not up at a 90-degree angle; then coaching her from inside the shower; then hopping back out to do an even grander pep talk with shadow puppets. She isn’t weird about it at all, just animated, and as much as Charlotte has struggled this season to get a handle on being the parent of a trans kid, these are the times when she shines. On day two of the Great Tampon Wars, Lily loses the string, and Charlotte coaxes her through trying to find it from outside the port-a-potty at the women’s shelter painting party.

As a reward, Charlotte gets a flash period — while wearing the whitest coveralls in existence — and so Carrie and Miranda spring into action and wrap her up in a sweatshirt. 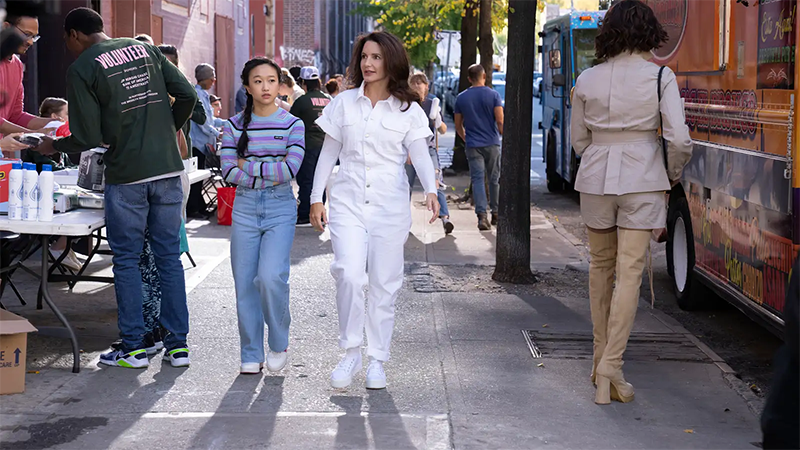 Coveralls are in, Lily, I saw them on Wildfang.

So. Carrie’s wedding ring. She can’t bring herself to take it off, which everyone keeps telling her is okay, but she realizes the fact of it probably means she isn’t ready for her second date with Peter the Teacher and his beautiful hair. So instead of taking it off, she uses a Band-Aid to fashion a DOUBLE wedding ring out of hers and Big’s rings, and goes to the date place to tell Peter she can’t do a date. He gets it. He’s still got a voicemail from his wife that he listens to all the time. But it is two strikes with them, and he knows it and he wants her to know it too.

It’s not the baseball talk that jolts Carrie into finally tucking her wedding ring in a box in the closet; it’s the fact that Steve tells her that he’s never, ever, ever gonna take his wedding ring off. He said “til death do us part” and he meant it. Miranda can do whatever she wants, he says, and oh she is, but for him: “Never. Comin’. Off.” Carrie is nicer to Steve than she’s ever been to anyone, sincerely telling him that he is a wonderful person, and please don’t close the door on meeting someone else FOREVER. He won’t budge, and that makes her realize she should probably at least try for a third date with Mr. Silver Fox. 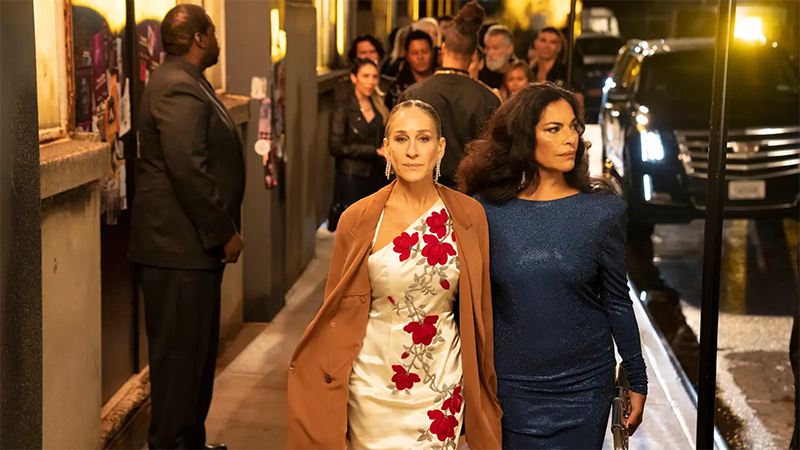 I don’t want to hear another word about how Blanche Devereaux is eight years younger than me!

But it’s not just the main trio bringing their drama to the women’s shelter. All the women of color finally get to meet this week, as their respective white pals converge on Nya’s shelter. Seema comes with Carrie, who says she’s been told she can’t just be the white woman who writes a check. Seema says that she’ll be the brown woman who does just write a check, and will spend the day smoking and waiting patiently for Carrie to be done so they can go dancing. Lisa Todd Wexley arrives with Charlotte in a giant stretch limo with their kids, and then orders a whole fleet of food trucks to come serve everyone lunch. All the kids bum out Andre, who said he was okay with not being a dad but it just hurts his heart too much to see other people with children. Nya asks him to please not negate the miracle of them by pushing for children any more than he already has, but he really wants to be a dad. It’s very sad! I wish I could watch this show more often, then one where Nya and Lisa Todd Wexley and Seema live! I wish their entire existence wasn’t anchored to the white characters on the show! I wish Lisa Todd Wexley would bring me a whole block of food trucks!

Next week is the season finale. What if Samantha shows up? I know I’m being as delusional as a Miranda by even asking that — but what if.