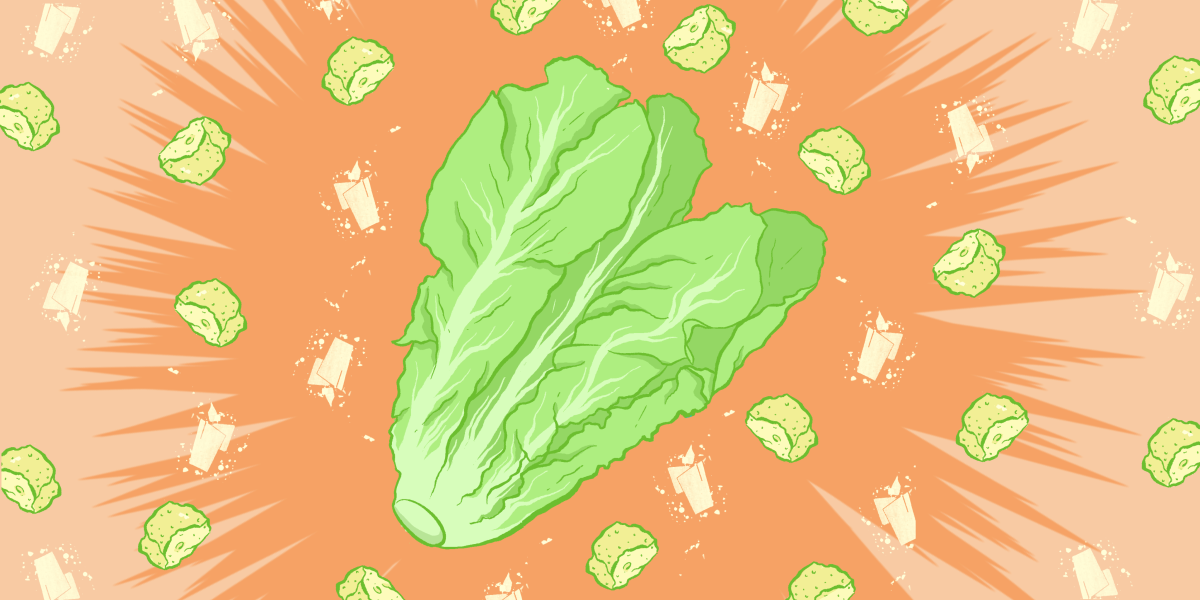 Here’s what I remember: a wooden bowl. My father’s silver hair under the spotlit kitchen island. Hands busy mashing yolk and rind; the squeeze of a tube of anchovy paste, the clinks of spoon to jarred garlic.

It was the bowl, my mother says now, that made the Caesar his. The seasoned, wooden bowl that made it so good.

It was the whole grain mustard, says somebody else.

There wasn’t mustard; that was the fresh egg, says another.

I wouldn’t know. I never tasted my father’s “famous” Caesar when he was alive. My father wasn’t much of a cook. He knew how to grill, I guess, though I never liked his barbeque; the chicken always a bit slimy, always a bit isn’t this still kind of raw? He knew how to smother steamed crab in spices and burning oil—easy enough. He knew how to order at a restaurant, how to eat. But as for his own concoctions, I wasn’t interested.

People remember his salad, though. They bring it up often.

My dad used to wake me up at 5 AM to watch the news with him, and when I complained he’d say, when I’m gone, you’ll wish I was still waking you up. Jewish guilt, yes, but the figure of him in the door, half-gone and backlit by blue, it got me out of bed every time.

Now I ask everyone but him: what went into that salad? Does mine come even close?

I think often of what will happen to my recipes when I die. To lose someone, I now know, is, most tragically, to lose their ideas. To lose their mind in the world, and the potential energy of that mind’s particular impact and beauty. The only chance we have against this loss is to replicate, to repeat, to talk story, as we say in Hawaiʻi, to go agonizingly and impossibly on, as imitators. Perpetuators. Gossipers.

I don’t want my food to die with me. It makes me want to can and cure and freeze and ferment, to spend my life doing it, so that people might continue to meet me through flavor and nourishment once I’m gone, so they might love the things I love. Grandchildren, strangers—I don’t care. Sichuanese pickling mother brines are passed on for generations, included in dowries, and I find that romantic.

I want my food to live beyond me for the same reasons I write, and perhaps there’s an arrogance to that; a Walt Disney immortal, megalomaniac dream. But at its center I think the desire is much more earnest and small. It’s the bathroom tag in sharpie, the etching beneath a dining room table or school desk, the whisper: please, please, don’t forget about me?

I fed my wife when we started dating, elaborate frittatas and a warm, winter stew. We were long distance then—she, in Texas, me in New York—and she missed my cooking, she said. I once labored over that stew a whole day, purchased a military grade thermos, and overnighted it to her so that when she opened it, steam rolled out, the meal still hot. It was a ridiculous gesture, once that earned me the nickname TK Suavé, but it worked. Years later, she married me.

Food is love; that is not hyperbole or inflation.

My friend Suzanne is in her late eighties, and I hope she lives forever. Recently she told me about the fig tree clipping her friend gave her in the 80’s, before he died of AIDS. He clipped the fig branch from Plato’s Academy in Athens, Greece, smuggled it back to the states, and then he gave it to Suzanne in their shared New York City laundry. For 40 years she’s kept that tree alive in the center of her living room. I watch Suzanne with the plant and I witness her spending time with her friend, keeping him around. He’s there, in the center of her living room. The last time I left her apartment, she offered me a clipping of the fig, so that I could keep her with me. She wrapped it delicately in a wet paper towel. As I drove it home in my lap I said please, please make it home to the center of my living room.

Soil, seed, bud; pan, salt, plate. It is love, to feed someone. To build root systems. To propagate however you best know how.

Here’s what I remember: my father, never in an apron. A worn t-shirt, drooping shorts, skinny ankles, especially once he was sick. He’d take a bite from the wooden bowl and say, are you sure you don’t want to try it?

I don’t remember the last time he said that, only that I said, for the millionth time, I’m sure, I’m sure.

The fig is from Greece and the Bronx and it is now in its new home in the south. Suzanne taught me about plants, the way my father’s father taught him about food. In a glass jar, the green stem is rooting.

My Caesar isn’t my father’s, even when I use his wooden bowl. But it is a rebuttal, a resistance, to an end.

DINNER PARTY is a four-part weekly series of bite-sized essays edited by Kayla Kumari Upadhyaya. Check out the first installment, Hot Cheetos: A Chorus by K-Ming Chang. Illustrations for the series made by A. Andrews.

T Kira Māhealani Madden is a Chinese, Hapa dyke writer, photographer, and amateur magician living in Charleston, SC. She is the founding Editor-in-chief of No Tokens, a magazine of literature and art, and is a 2017 NYSCA/NYFA Artist Fellow in nonfiction literature from the New York Foundation for the Arts. Her debut memoir, LONG LIVE THE TRIBE OF FATHERLESS GIRLS, was a New York Times Editors' Choice selection, a finalist for the National Book Critics Circle John Leonard Prize, a finalist for the LAMBDA Literary Award for lesbian memoir, and is now in development as a feature film. Winner of the 2021 Judith A. Markowitz Award, she teaches at College of Charleston. There is no period in her name.

T Kira has written 1 article for us.