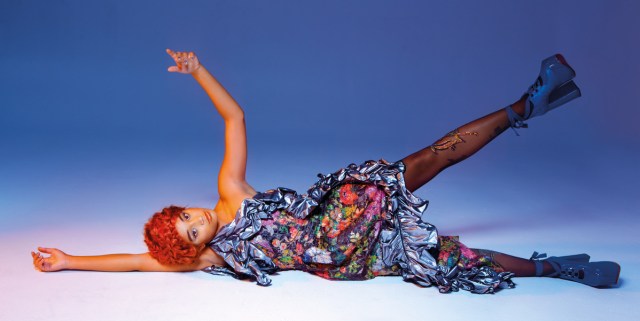 Early in the cold, unforgiving winter of January 2016, Amandla Stenberg came out as bisexual on Teen Vogue’s Snapchat. We knew her already and loved her dearly — she was “Rue” in The Hunger Games. Sweet little Rue! Now Amandla Stenberg was all grown up, had recently taken Kylie Jenner to task for cultural appropriation following Jenner’s ill-conceived decision to post a pic of herself in cornrows with the hashtag #whitegirlsdoitbetter, and Amandla Stenberg was bisexual. She told the world:

“I wanna thank Teen Vogue for giving me this opportunity, I cannot stress enough how important representation is, so the concept that I can provide for other black girls is mind-blowing. It’s a really really hard thing to be silenced, and it’s deeply bruising to fight against your identity and just mold yourself into shapes that you just shouldn’t be in. As someone who identifies as a black bisexual woman, I’ve been through it, and it hurts and it’s awkward and it’s uncomfortable.”

Now, more than two entire trips around the sun later, Amandla Stenberg has a new truth, as shared with her friend King Princess in an interview for Wonderland Magazine:

I had a few big Gay Sob moments when I realised I was gay. One might assume that they were mournful sobs, but actually quite the opposite in my lived experience. They were joyful and overwhelmed sobs – socialisation is a bitch and a half and kept me from understanding and living my truth for a while. I was so overcome with this profound sense of relief when I realised that I’m gay – not bi, not pan, but gay – with a romantic love for women. All of the things that felt so internally contrary to my truest self were rectified as I unravelled a long web of denial and self deprivation. Like oh, maybe there’s a reason why I kissed my best friends and felt ashamed growing up. Or watched lesbian porn and masturbated (and more) with my friends at sleepovers.

Stenberg recalls only feeling attracted to men who were gay or “femme boys who damn near had the sensibility of a woman.” She clarifies: “my sexuality is not a byproduct of my past experiences with men, who I have loved, but rather a part of myself I was born with and love deeply.”

She talks about heteronormativity and the impact of socialization and how “once I was able to rid myself of those parameters, I found myself in a deep well of unbounded and untouchable love free from the dominion of patriarchy.”

She remembers seeing that scene in After Sex where Zoe Saldana and Mila Kunis hook up and also “all that gay shit went down between Mila and Natalie Portman in Black Swan.” She recalls being inspired by Frida Kahlo, Audre Lorde, and Syd (The Internet). She recounts growing up aware of so few women who looked like her:

Had I had more representations of black gay women growing up I probably would’ve come to conclusions around my sexuality much earlier because I would’ve had more of a conception of what was possible and okay. Having more representations of black gay women now and seeing myself reflected in them has been a huge aid in seeing myself as whole, complete, and normal.

What’s remarkable about this interview aside from the remark-ability of Amandla Stenberg herself, a brilliant artist, musician, actress and activist — is that we have witnessed her growing up and coming into her sexuality and evolving at such a young age, something entirely impossible only a decade ago. When Amandla came out in 2016, at the age of seventeen, she was one of the youngest celebrities to ever do so. Now, still relatively new to this great earth, she remains open to the world and the truth as it reveals itself to her. In her introduction to the interview, King Princess writes:

…I distinctly remember walking out of my junior year English class reading: “Amandla Stenberg comes out as a queer”. She unknowingly set a precedent in my life, a gold standard of how to be proud and exist in the intersectionality of multiple identities that were once thought of as being conflicting. Now I know her. I know the nuances of her personality and the uncontrollable passion that she carries in her being.

Read the interview in Wonderland Magazine to find out more about her gay pride, her work on the film The Hate U Give (inspired by the events that gave rise to the Black Lives Matter movement) and young adult dystopian film The Darkest Minds. We will continue to watch and love everything she puts into the world and also maintain a consistent, simmering, low-key obsession with who she might be dating at any given moment.