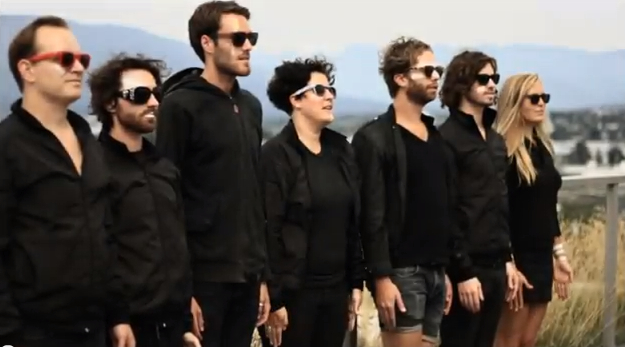 still from “Diamonds” video, released by The Lab TV –

TLGLTKP won my heart last year with their super hooky single “Robin“, an ode to sex and Berlin that’s guaranteed to make even the most disciplined non-dancers get down when no one’s watching. (You may also find yourself absentmindedly singing about threesomes in public places and consequently on the receiving end of major side-eye. Worth it). For something a little more workplace-friendly, check out this acoustic video of “Diamonds” which was recently released via The Lab TV.

It sounds exactly like the name – our shows are high energy dance parties. We try to create a space where everyone feels like it’s their birthday party.

Synth, guitar and piano. I started playing the piano at the same time as learning to read, so around five  years old.

Robin and the whole album once it’s released. We put a lot of love and time into the album – most of it produced and recorded in one of our band members homes.

“The Score” by the Fugees and “Sound Kapital” by Handsome Furs.

Taking part in Tracks on Tracks, which was modeled after Festival Express. Topless and 40 or so other musicians took the train across Canada. We basically played music and partied for five days straight. It was claustrophobic and terrifyingly fun – and as a result they are making a documentary about it.

It’s a song called “Diamonds” on our record that is coming out in the spring. It’s about being in love with someone who is enchanting, charming and brilliant to watch but empty and/or confused inside. I write about not being a “diamond”, not being “cold to the touch”- about knowing who I am, and how I love.

Best thing – Seeing everyone in the crowd covered in glitter, sweaty as hell, and singing with us. Worst – when your van tempts to blow up while driving through the Canadian rockies.

We do each others make up and glitter and warm our vocals up by singing “Amazing Grace” and the title track from Jurassic Park.

The Knife and Miike Snow

Keep an eye out for Top Less Gay Love Tekno Party’s debut release, which is planned for spring 2013. Everything else you’d like to know can be found here: