Brooklyn’s most adorable songwriter, Mal Blum, has a new album, Tempest In A Teacup. It’s so good, you guys. Have you been listening to it? Listen to it right now.

Mal Blum has supported lesbian icon and folk legend Melissa Ferrick on two tours, and has played shows with Jeffrey Lewis, Amanda Palmer and Kimya Dawson. Tempest In A Teacup is her fifth album. I have had it on constant repeat for weeks now. 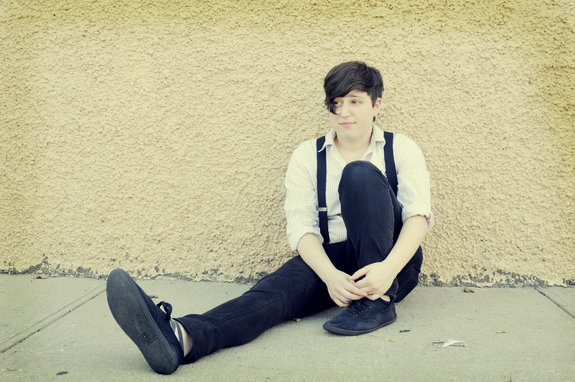 Tempest In A Teacup opens with “Overseas Now” (recorded with Melissa Ferrick),  my favorite on the album. Blum has a way of writing songs that will get stuck in your head for days (I sing “Baltimore” an unnatural amount purely due to its earworm status). This song is the perfect tune to listen to while breaking up with someone. Did everyone in Brooklyn get their heart broken immediately prior to recording their newest albums? “Overseas Now” features clever lines like “You’re a getaway vacation that I hoped would bring salvation. It did not.”

There’s a song about zombies. Zombies, everyone. Despite the general heartbreak of the first song, the entire album is optimistic and endearing, which seems to be Mal Blum’s signature style. Another standout on the album is “With Samson in Washington State”. While casually listening to this album in the background, this song had me pausing to check its title and I ended up replaying it about twelve times in a row. “With Samson in Washington State” is hauntingly beautiful, a real departure from her usually light style. Here’s an acoustic version of the track:

The one thing Blum has done particularly well on Tempest In A Teacup is the incorporation of surprising sounds in the tracks, such as the glockenspiel (Mal Blum says so) in “Overseas Now,” the strings in “With Samson in Washington State,” or the waltzing keyboard melody in “The Difference.” Other tracks feature full rock ensembles, such as “Brooklyn,” but they don’t sound out of place on this heavily acoustic album. “Valentine’s Day” actually had me laughing out loud, mostly from the repeating line “Let’s stop cheating on each other.” It’s so sad, but so hilarious at the same time, a balance that Blum has perfected through her career.