Gay Democrats and socially conservative Republicans don’t usually have a lot to say to each other in regards to sex ed in public schools, unless it’s “you’re wrong.” But Alabama state representatives Patricia Todd (a gay Democrat) and Mary Sue McClurkin (a Republican) agree on one thing: they want Alabama’s current sex ed law repealed. 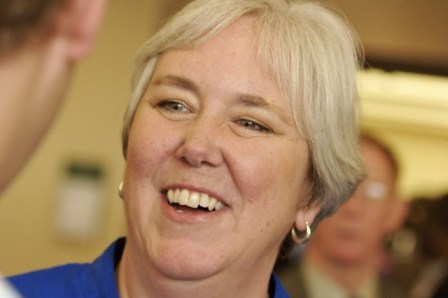 For Todd, it’s because of an antiquated clause that requires teachers to inform students that homosexuality is “not a lifestyle acceptable to the general public,” and even worse, that same-sex sexual interaction is illegal — which it isn’t. While there’s no confirmation that the clause is actually being enforced, it’s fairly shocking that legislation with this language still exists.

“I don’t know if anybody is actually teaching this, to be honest with you” Todd said. “But the fact that this is even in the law is an insult… ‘Not an acceptable lifestyle,'” Todd said. “What the heck does that mean? It’s like they’re trying to say we shouldn’t exist.”

Todd proposed a bill that would remove the anti-gay wording from the law, but didn’t expect a lot of support. What she did find support for, though, was the idea of eliminating sex ed entirely — from Republicans like McClurkin. McClurkin doesn’t believe that Alabama schools should have any requirements on how they teach sex ed. In fact, she believes they shouldn’t be required to teach it at all if they don’t choose to, or if they believe, as McClurkin does, that “sex education is one topic that’s best taught in the home.” Todd doesn’t want to eliminate sex ed entirely, but she does say “I’m just telling them they shouldn’t be teaching things that are incorrect.” Considering how poorly Alabama’s sex ed laws seem to require putting together curriculum — the law also says that educators must tell students that “abstinence from sexual intercourse outside of lawful marriage is the expected social standard” — she doesn’t seem sure that eliminating it isn’t the best option.

In an ideal world, kids would be taught in schools across America that gay relationships and families are valid, and that it’s neither a “lifestyle” or “unacceptable.” But in the world we actually live in, just reaching a point where kids aren’t actively misinformed both about sexual orientation and their own bodies takes some serious effort. Whether an uneven, objectively incorrect, and arbitrarily enforced sex ed curriculum is more beneficial to the kids of Alabama than whatever their schools might decide to pursue on their own is hard to know for sure. But it says something about the state of sex education in our nation if two people whose parties hold radically different views on the function and value of sex ed can agree that it’s not working, even if they’re for virtually opposite reasons. Specifically, it says that while we may be totally unable to agree on anything else regarding what kids, both queer and straight, need to know about sex and sexuality, we can agree they’re not getting it right now. And whatever happens regarding the laws around curriculum in Alabama, hopefully steps will be made towards correcting that sooner rather than later.