You see, I love very little things in the collective history of cinema like I love A League of Their Own. That’s not hyperbole! When the original film came out in 1992, I was six years old. I did not see it in theaters (because I was six) but I requested that my mother rent it, every single week, from Blockbuster for our weekly family movie nights for FIVE MONTHS on end!! Everyone please pour one out for my sweet mom and her patient soul because I’m sure she still has shudder worthy flashbacks when anyone says “batter up.”

Well my friends! The answers to those questions were “yes” and “even more yes.” I have watched the entire series, all eight hours, front-to-back, twice before it even dropped on Prime Video in a brave effort to catch all the A League of Their Own movie references and Easter eggs — every possible whiff of sweet, sweet nostalgia — present them to you here. 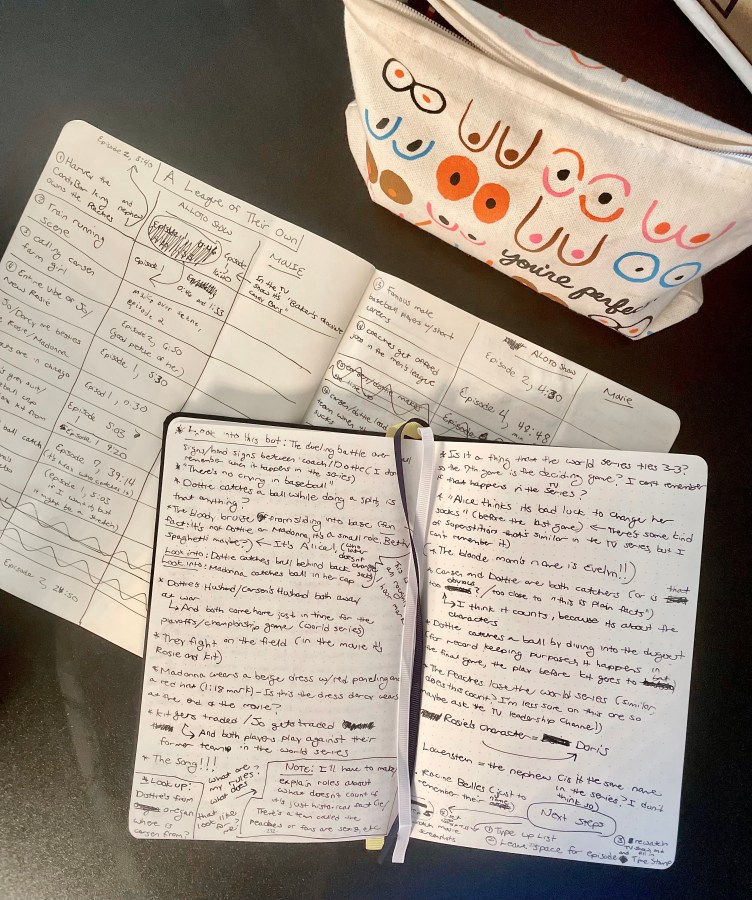 All of this, because I love you.

But first, some ground rules: I spent a lot of time thinking about this, and not everything in a piece based in real actual history, like A League of Their Own, counts as “movie references” or “Easter eggs.” Some things are just plain facts of the time period, and I am not going to count them here! This would include, but is not limited to, “baseball fans are being sexist” or “both teams played night games” (duh) — just to give an example. We will have a deep dive into the history of the 1940s coming next week from Autostraddle co-founder and CEO Riese Bernard. But for today we are talking movie specifics only!! I’m also not including “this actor kind of looks like that person” or “look they are both wearing sideswept pin curls” — because again, that comes with the time period! They all have 1940s pin curls or are tall/short/red haired! Humans walking around happen! (There’s two notable exceptions to this rule, and when you see them I feel confident that you’ll agree).

Thus far my obsessive research has discovered a grand total of 35 A League of Their Own movie references and Easter eggs in A League of Their Own! They are listed in episode-by-episode order, so you can follow along while you watch at home (but don’t scroll ahead unless you like spoilers! Or if you do scroll ahead, at least please do not yell at me about spoilers. This whole post is spoilers. That’s what you have agreed to by reading it, there’s no crying in baseball).

I’m starting my third rewatch today! If I find any more A League of Their Own Easter eggs, you can bet I’ll include them here — if you find any before me, let me know in the comments! You can also follow all of our A League Of Their Own coverage, including daily recaps, because trust me, we are just getting started. 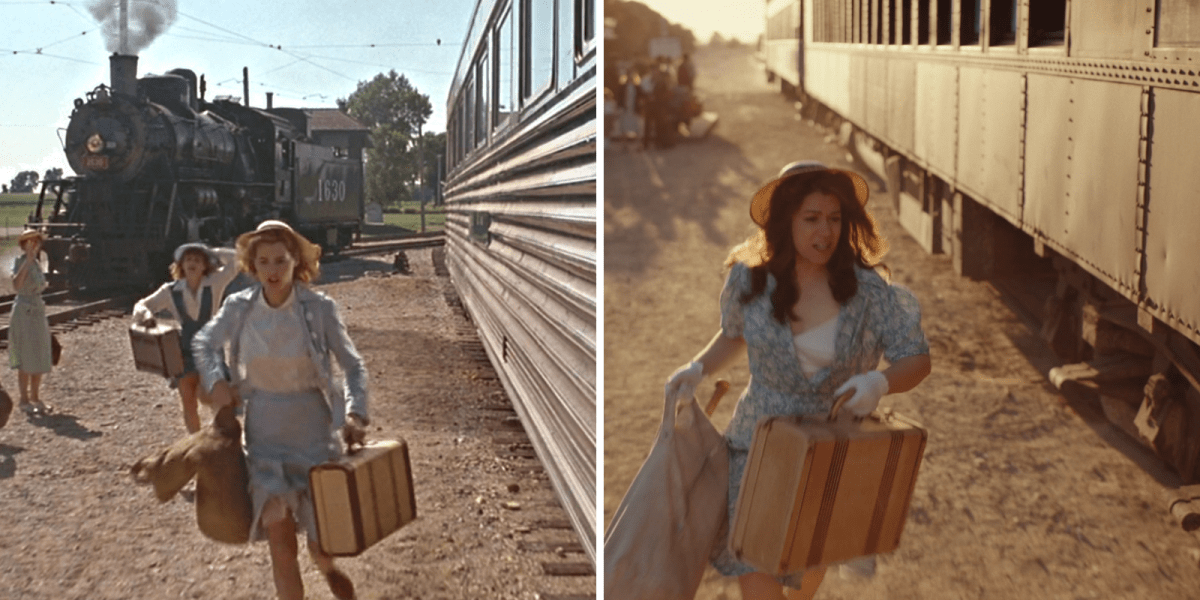 2. Walter Harvey, the Candy Bar King, owns the Rockford Peaches and is a founder of the All-American Girls Professional Baseball League (AAGPBL), his nephew is the manager of the ball club. (In the television series, it’s “Baker’s Chocolate Candy Bars”, not Harvey Bars, but c’mon… we know what we’re doing here.)

3. Carson’s husband Charlie, like Dottie’s husband Bob, is away fighting the war.

4. Jo’s entire vibe can only be described as “The New Rosie” ⚾️ 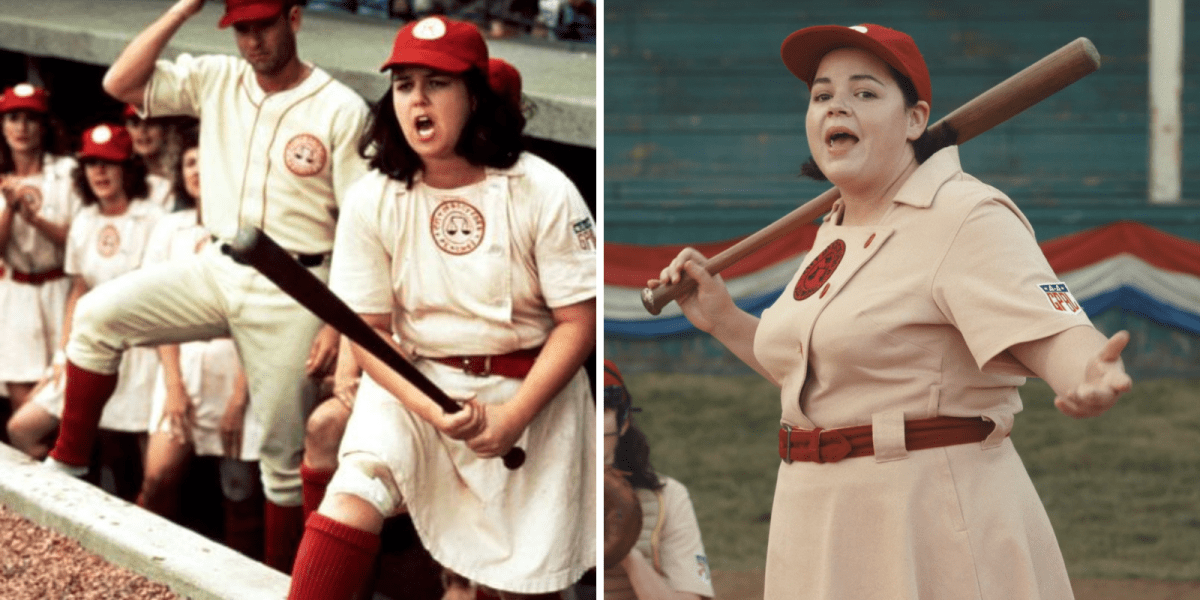 5. Speaking of which, Jo and Greta are both loud and brassy besties from New York with big dreams, and ring-a-ding-ding — that makes them the new Rosie and Madonna. 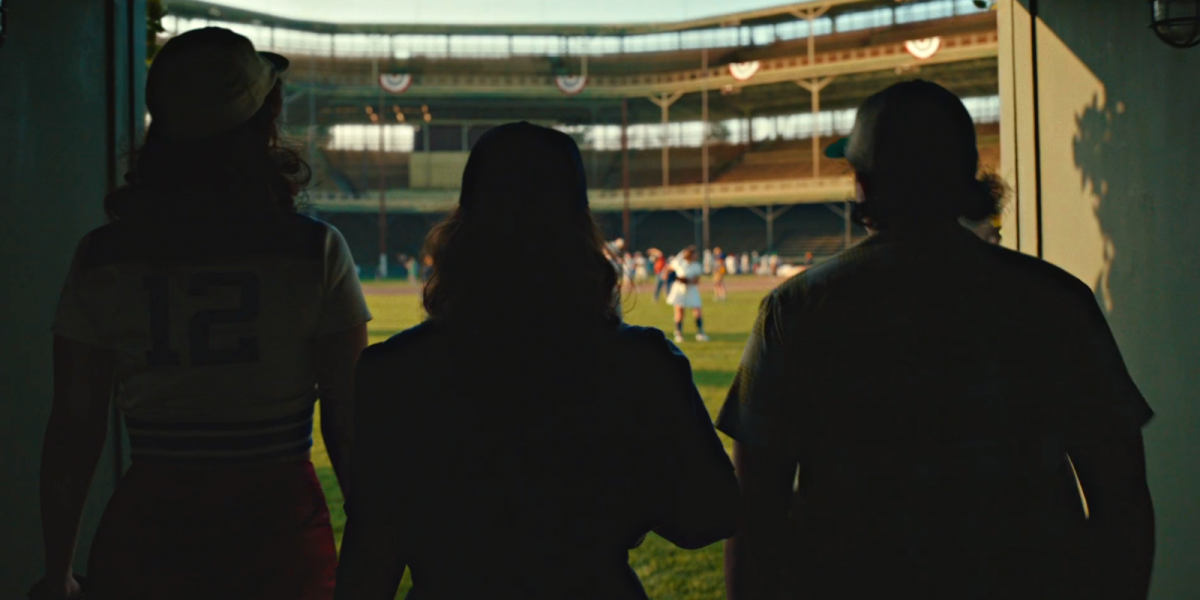 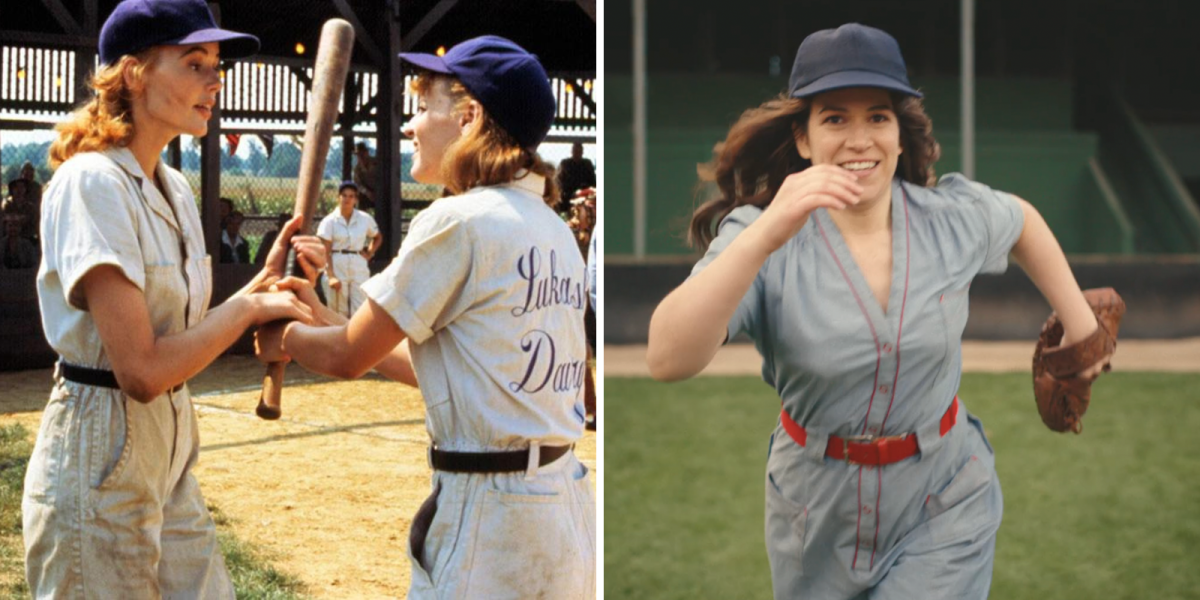 8. The use of “Choo Choo Ch’Boogie” by The Manhattan Transfer over baseball montages (we love a good music cue, and can I just say finding this specific version of the song on Beyoncé’s internet from the 1992 A League of Their Own soundtrack took infinitely longer than expected!)

9. The unnamed Black woman from the 1992 film throws a ball so hard it impresses everyone around her, a direct nod to the fact of who exactly was left out of the AAGPBL due to segregation. This opens the door for Max who is kicked out of try outs even though she clearly has the best arm on the field — she still doesn’t make the team (racism), but she becomes the co-lead of the series. 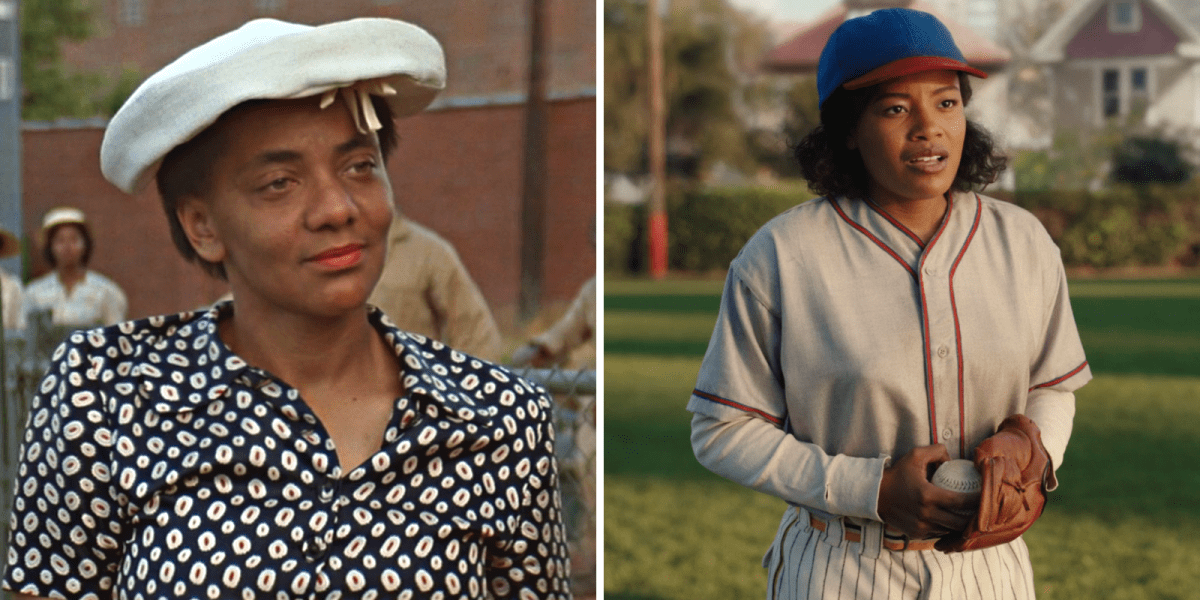 10. A homage to Dottie catching a ball while doing a split.

11. A homage part deux to Rosie (excuse me, Doris) catching a ball by diving into the bleachers.

12. Both versions of Peaches are coached by formerly famous men baseball players who had short careers and don’t want to be here. Jimmy Duggan, meet Casey “Dove” Porter.

13. Carson and Dottie are both catchers. 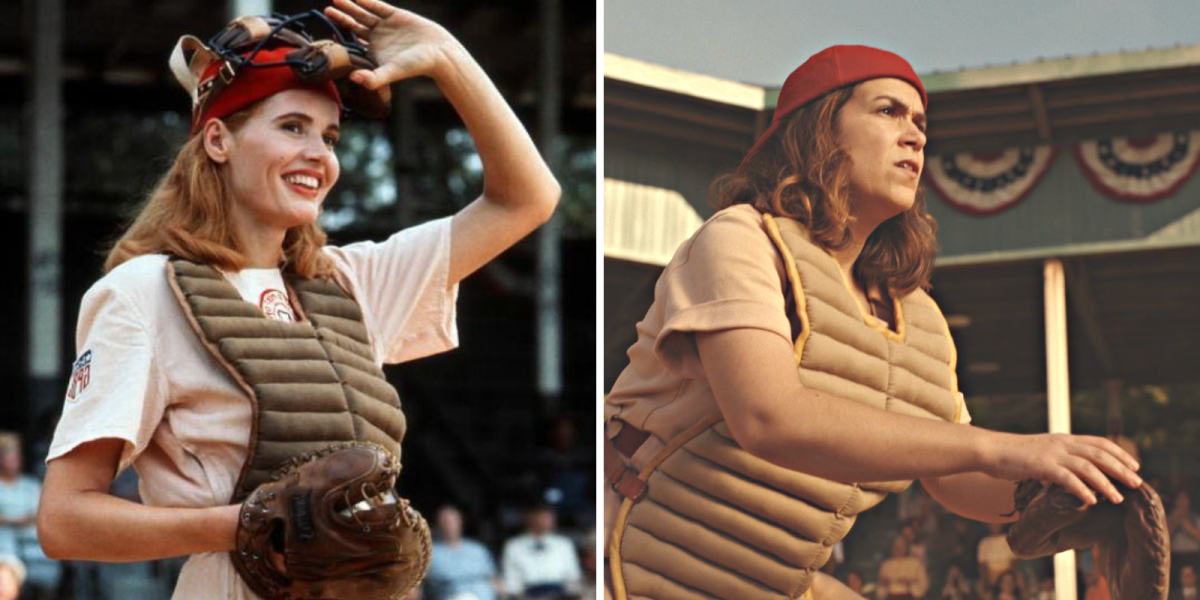 14. The beauty make over/ charm school scene, in its entirety. But damn do I love what the television series does with it and the commentary it makes about “queerness” and “passing.” 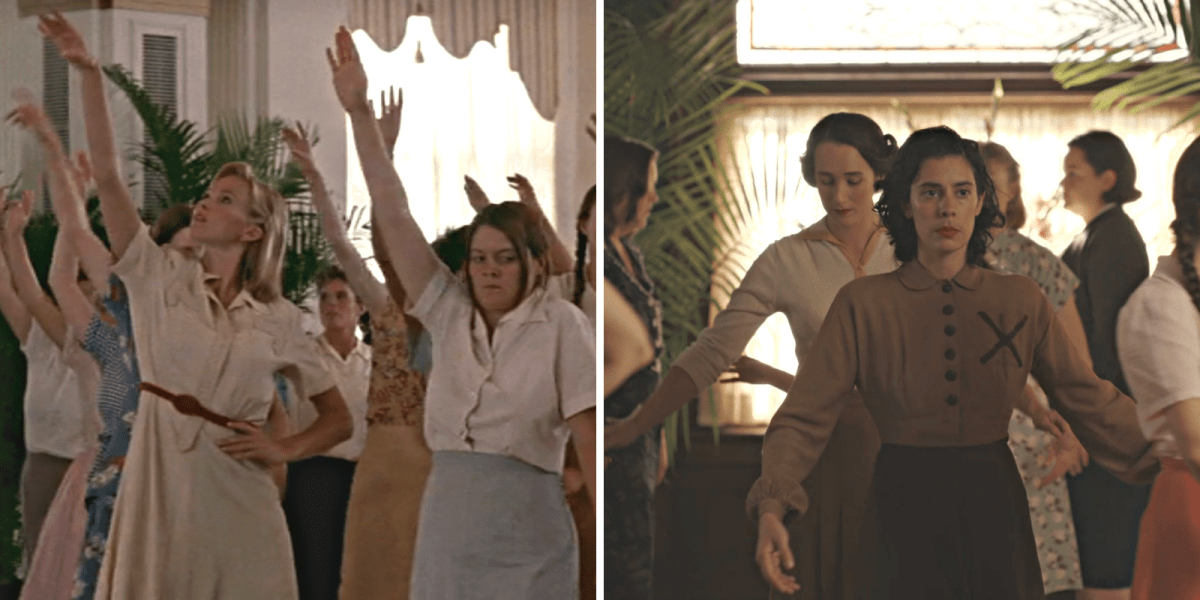 15. Everyone calls Carson “farm girl” — despite her not actually being from a farm (I’m counting this as an reference to Dottie and Kit both famously being from an Oregon dairy farm in the original). 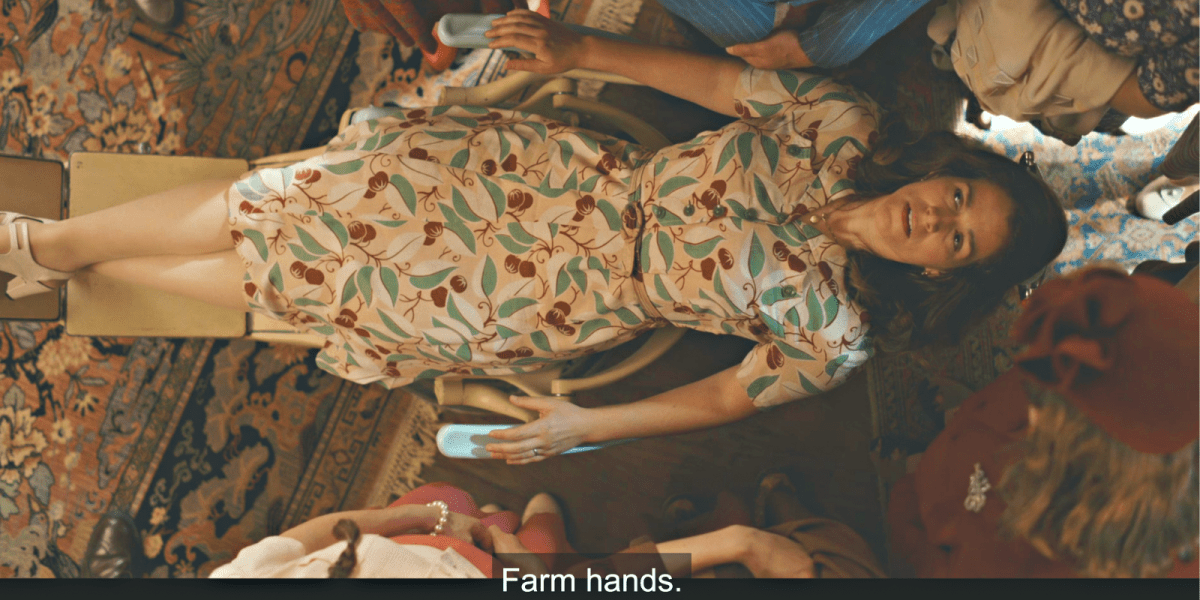 Carson’s actually called a farm girl right from episode one, and during the entire series, but the moment in episode two’s “makeover scene” where they reference her “farm hands, farm face” was too good for screenshooting purposes to pass up.

16. Carson and Dottie both lead the Peaches when the guy coach inevitably sucks at his job.

17. The use of the black and white 1940s newsreel as a narration device, so much worry about the “masculinization of women.” 🥺 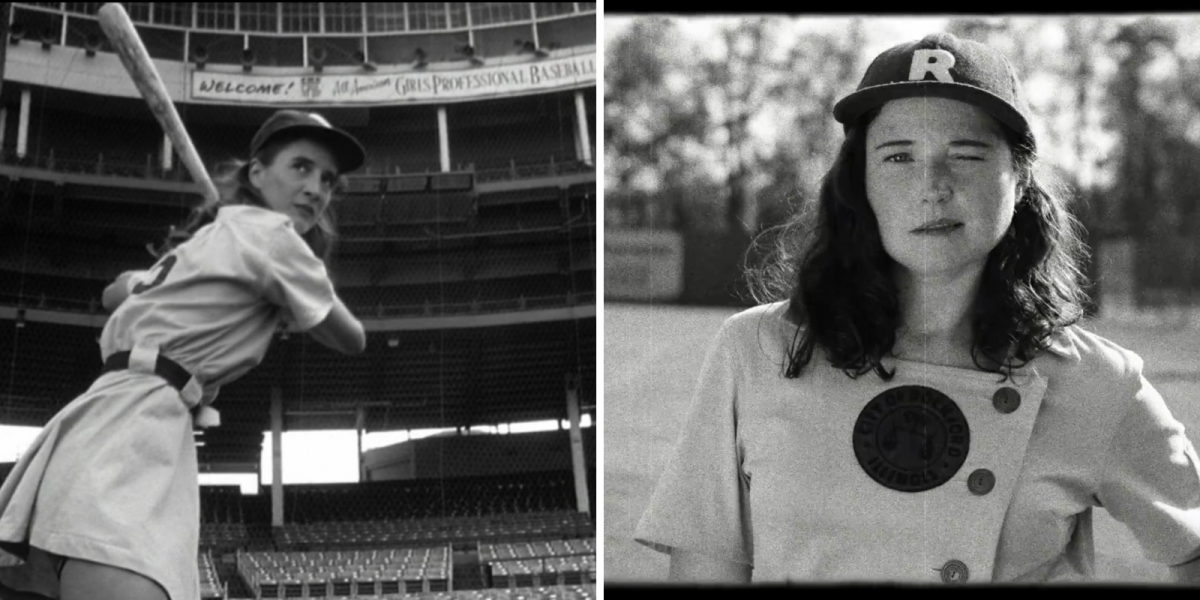 18. This comes from Autostraddle A+ member Caitlin, who caught it when I missed it! “Dove offers Carson some dip the way Jimmy offers Dottie some. Carson thinks it’s gross but Dottie takes to it.”

19. While the Peaches travel to an away game with the Racine Belles, we learn from Carson’s notes that “Johnson, #23, always goes for the ‘high ones'” — of course Kit, who ended her career as a Racine Belle, never laid off the high ones. (Dottie: “Mule!” / Kit: “Nag!”)

20. The dueling battle of the hand call signs. 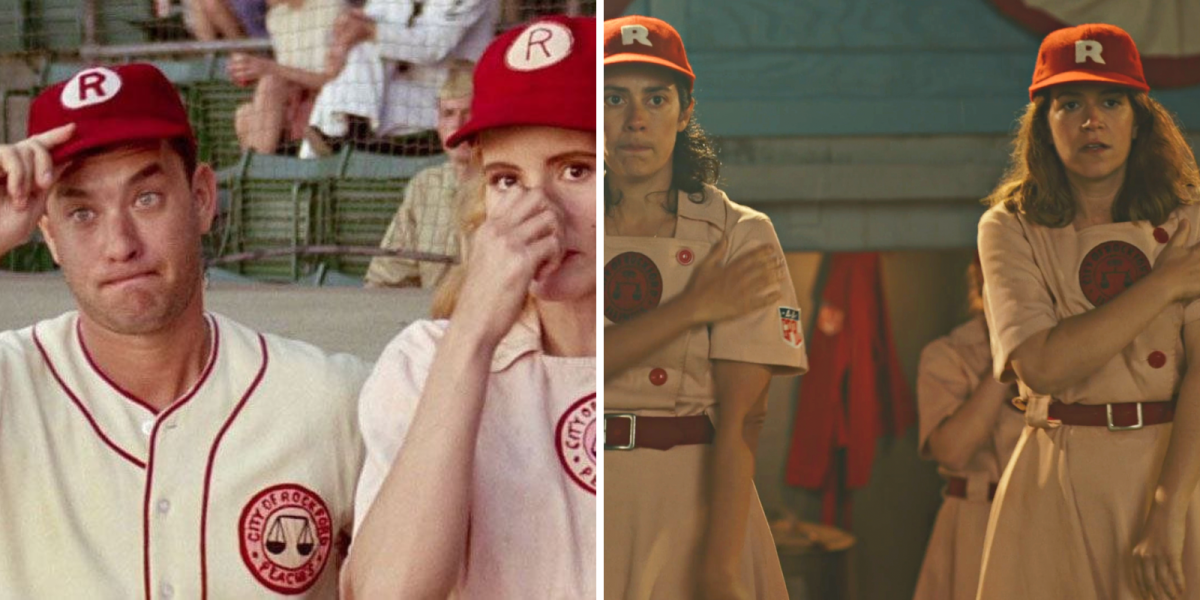 22. Both Jimmy Duggan and Dove Porter get offered jobs in the men’s league (the difference being that Dove takes it, and Jimmy stays). 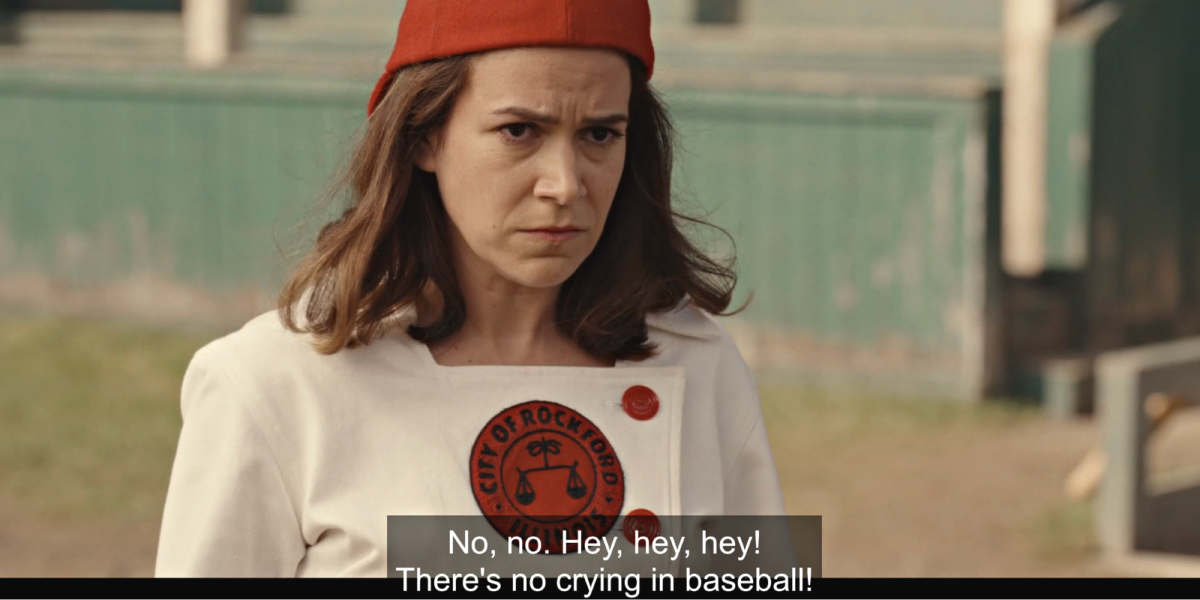 24. In A League of Their Own (the movieTM), Alice thinks it’s bad luck to change socks. In episode six A League of Their Own (the television seriesTM), Jess says “Lady Luck is on our side, so from this point on we change nothing! Not our shoes, not our clothes, not what we eat for breakfast. nothing!” And then later in the same episode, another player on the Peaches says they haven’t changed their socks “in weeks” in response to someone asking “what is that smell?” in the locker room.

25. A Racine Belle runs directly into Carson over the plate, and everyone hold your breath… Carson does NOT drop the ball. She! Does NOT! Drop! The Ball! 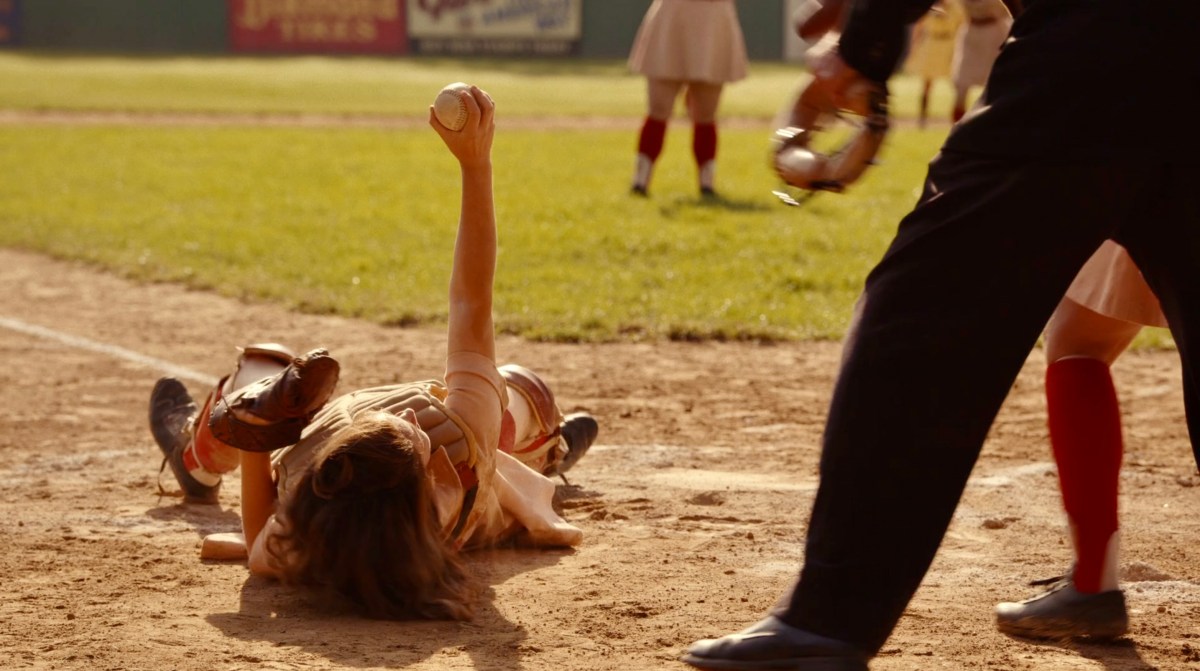 And if you listen closely, that sound you hear is me passing out — 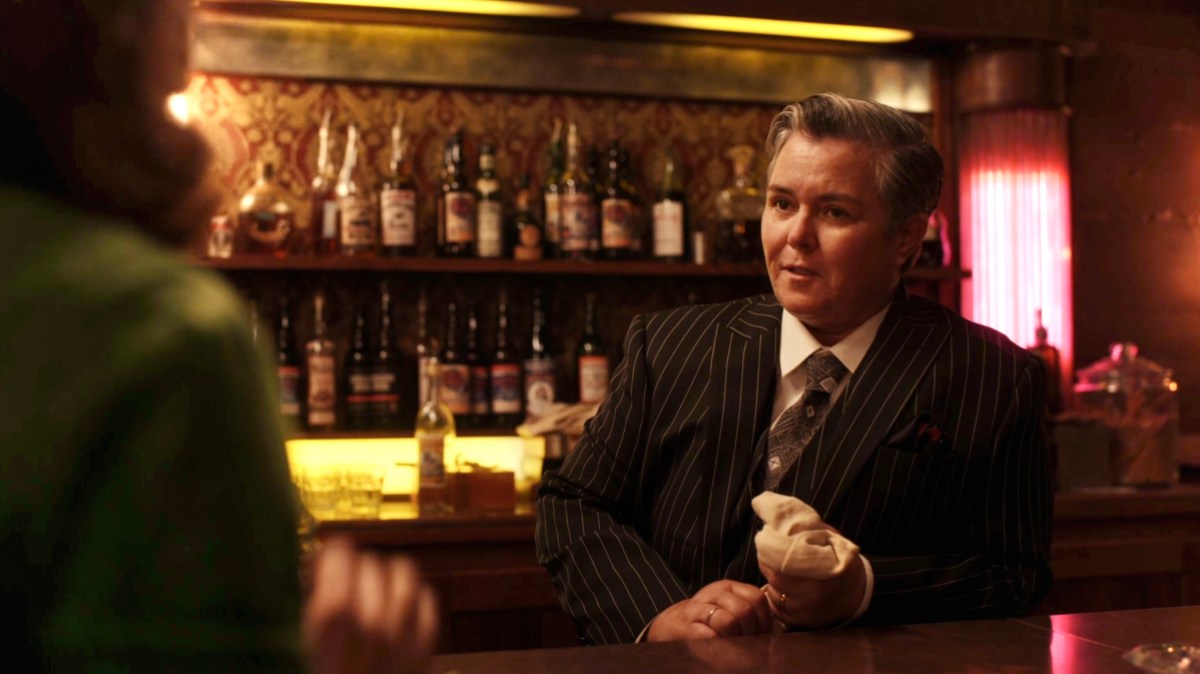 27. Kit and Jo both get traded. (And no, I’m not emotionally prepared to talk about Jo getting traded. If you made it this far, you know why.)

28. Dottie’s husband and Carson’s husband both come back from the war, just in time for the World Series.

29. Maybelle, a short curvy blonde, is found out to be a mother on the team (much like Evelyn, the short curvy blonde of the original, is the mother of Stillwell Angel — notorious brat and unofficial Peaches mascot of “You’re gonna lose!!” fame). 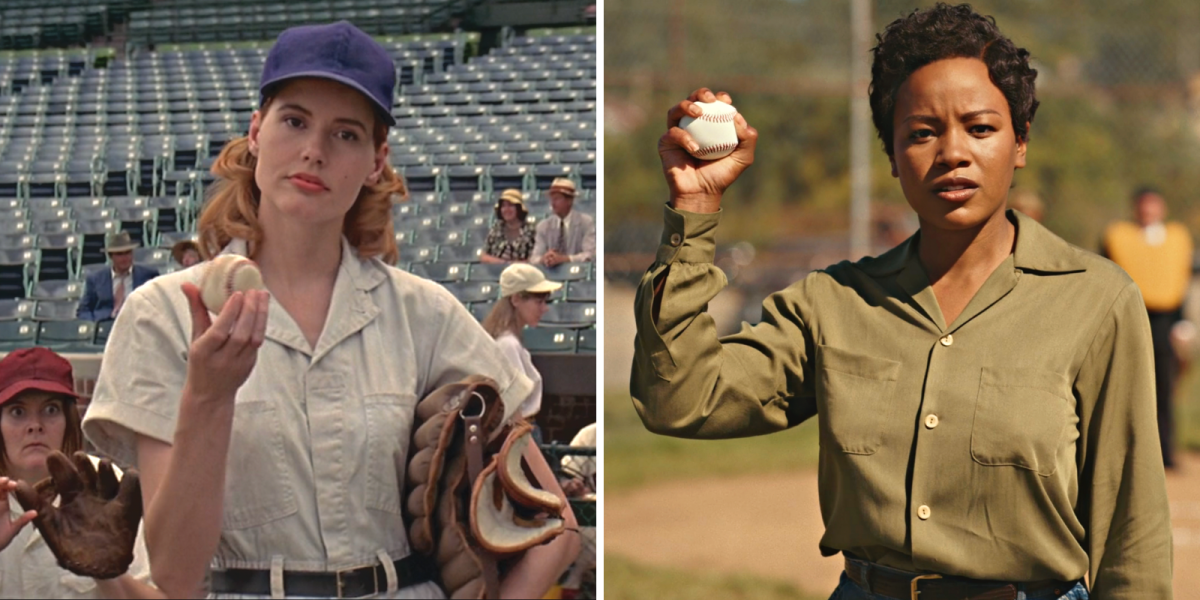 32. Kit and Jo both play against their former team in the World Series. 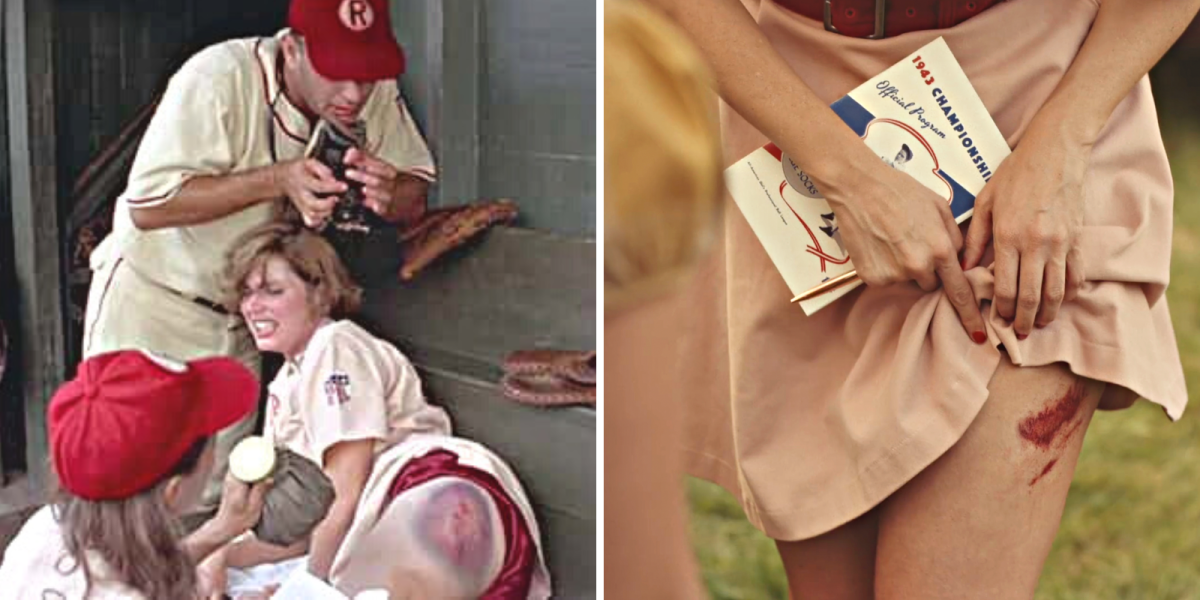 (Little known fact! The bloody bruise that Alice gets in the original movie is a real injury that actress Renée Coleman sustained during filming, and director Penny Marshall worked it in. Ouch!)

34. In remembrance of Dottie catching a ball behind her back. 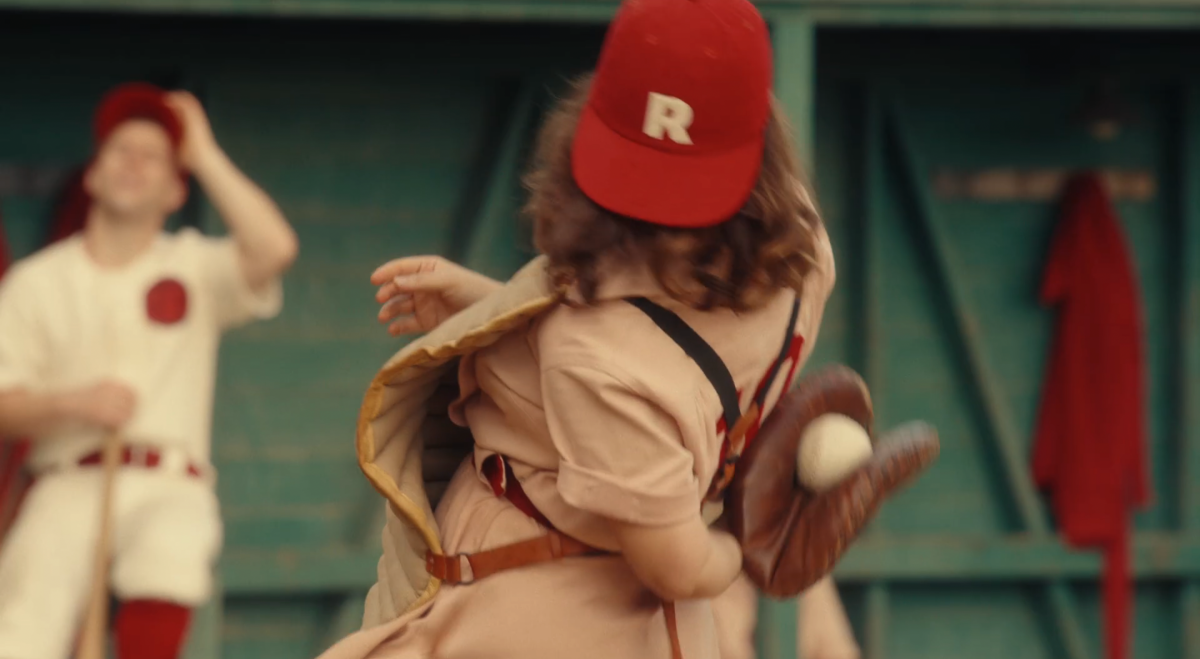 35. The Peaches lose the World Series — but they win in our hearts.

Carmen has written 497 articles for us.