I have been a loyal user of one kind of bra for over ten years. Obviously, I’ve bought new ones (time and again) and that’s been great, but I have not strayed from my allegiance to the Lane Bryant Plunge Bra. I knew I should up my support game by trying something new and I’d always been curious about getting a custom bra fit. We’re lucky in New York City to have quite a few legendary stores to choose from.

The thing about a lot of plus size bra manufacturers is that they don’t conform to traditional bra sizing. They may use the same bandwidth + cup size measurements but they don’t actually work if you base it on your interaction with a tape measure. I’ve always found it’s about just trying them on in the store and seeing which one fits, kind of like you would try on dresses. I thought a lot about what it would look like to have someone come at me with a tape measure and rustle up the right fitting bra. 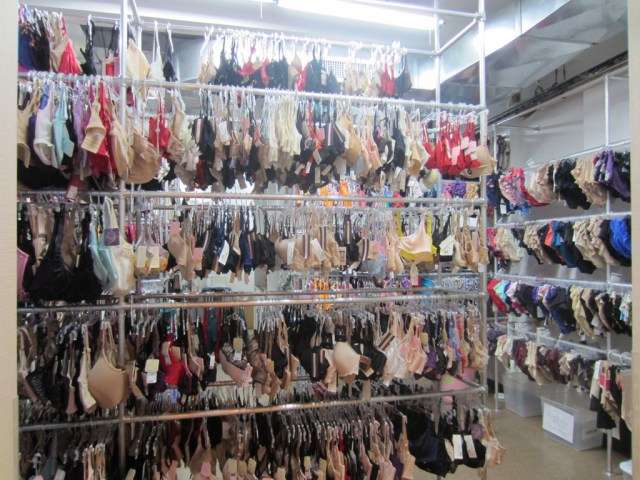 Racks and racks for racks.

To spend the kind of coin one needs to in order to get Bras That Fit And Last is a little daunting. To Go To A Place to get that done is also daunting. Soooo… I procrastinated. I knew the bras I had were no longer fitting as I had an unanticipated and unintended weight change and was kind of annoyed by it and resentful that I had to get new clothing and bras. I let it go until both my best friend and my girlfriend told me I was no longer allowed to wear these monstrosities that were letting my boobs roll around like chicken cutlets. 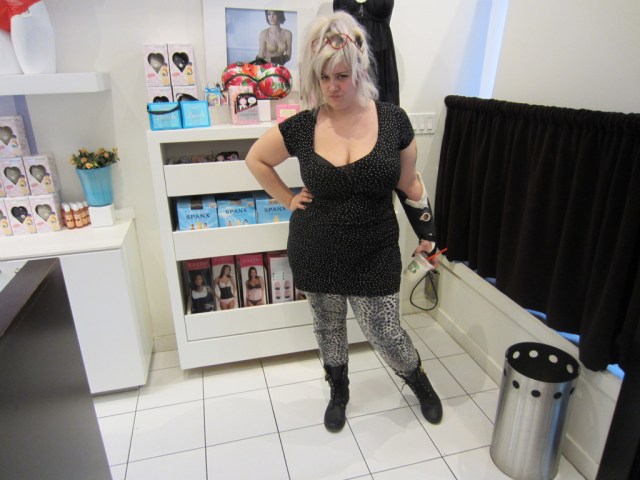 My bestie Jacqueline along for support.

I enlisted Jacqueline’s support and we went to a custom bra store a kinda-masculine-of-center friend had raved about. Linda the Bra Lady has two locations, one on the Upper East Side and one in Murray Hill where we wanted to get brunch.

Bra shopping pro tip: I highly recommend having lunch right before you go shopping for anything that might trigger body issues because it’s best to leave hangry out of the emotional equation.

Though we didn’t have an appointment and they are recommended, we were seen within about ten minutes. We poked through the showroom and I was a little confused about how little they had out considering the range of sizes they said they carried. I loved that the mannequins were different sizes and some were plus sized right amongst the smaller ones (or “straight” sized as they are called in the plus industry). I like a store that carries all sizes and I especially like it when plus sized clothes aren’t relegated to a secret shame kind of area. Our money is just the same and I find it very affirming when our clothes are viewed as just as valuable by a business.

We went to the fitting area and it looked like I was shopping for a wedding gown — super nice with a roomy center couch for the support team to hang out and offer advice. There was a huge variety of body sizes in the store with us and everyone had different levels of modesty. As someone who occasionally performs burlesque, I don’t have a lot of modesty concerns in changing rooms, but it would be easy to tuck yourself away and not have to show off your bra situation.

I was greeted by Linda herself, though there is a team of bra fit experts who are trained by Linda for three months to achieve that title. She measured my band size with my bra still on and then had me take it off and eyed my tits for a few beats. Then she said, “I’ll be right back,” and went into the stockroom. I peeked back there and that’s where all the bras are. Racks and racks, as tall as you can imagine, with lots of colors, lace and swirly magic. 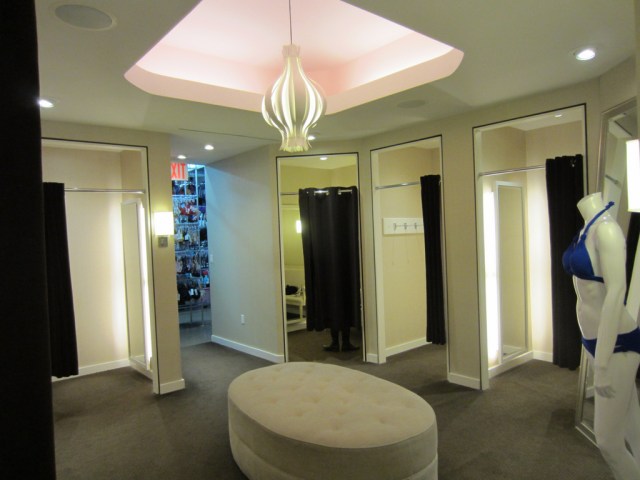 She came back with a few options and I slid in and out of them, with her expertly adjusting, appraising and approving or rejecting. There were a few winners right away, including a cute t-shirt bra and a really foxy red and black pinstripe bra. I let Linda know I like fun bras in fun colors and I got the run of what she had in my size. I ended up with this gorgeous teal bra that she gave me for half off ($60 down from $120). I also got a super cute beige lacey bra for everyday wear that was $82. And the red pinstriped one was only $38. The bras they have run the gamut from $29-$129.

Linda convinced me to let her throw away the bra I wore in, she said, “When it no longer treats you well it’s time to throw it away, just like a man.” Which is great advice if you modify the “man” to be “any gendered romantic relationship,” but I got the gist. 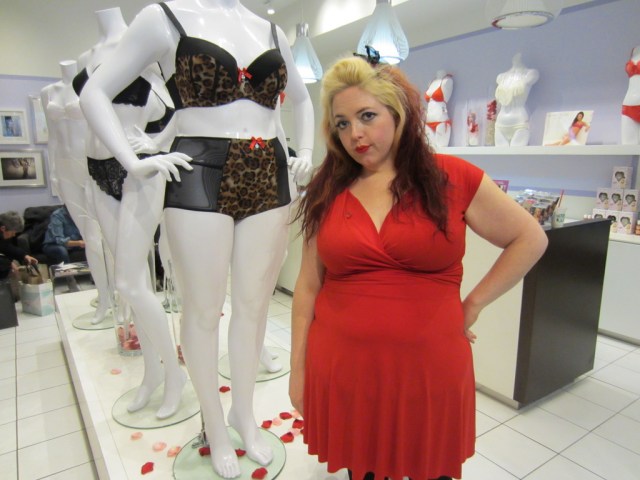 Me and a plus size mannequin killing it in a leopard bra. Here I am wearing an old bra that doesn’t fit.

They kept my records in their system, so if I want to order a new color or another of the bras I bought I can just call them or swing by. As for the leopard bra I coveted but they didn’t have my size in stock, I’ll need to go back because they know which bras fit a little different and require an in-person try on.

According to her website, custom bra fittings can happen via phone, online chat or email, so far away folks have access to Linda’s magic as well. I’ve been wearing my new bras for over a week now and have been very happy with them. The bras range from AA-N (yes, N cup is a thing) and they have swimwear, nursing bras and mastectomy bras available. 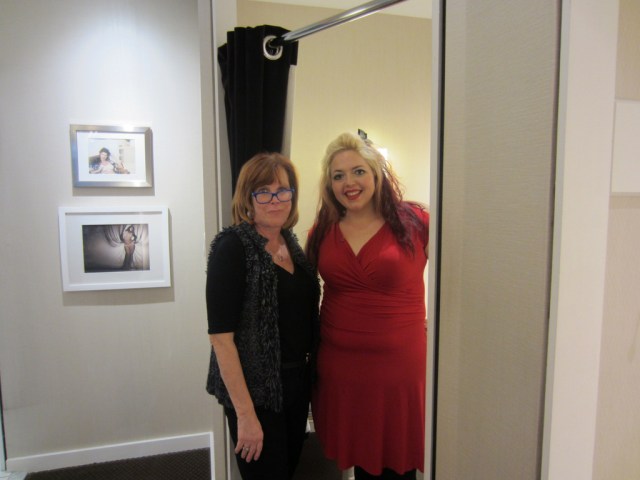 Me and Linda the Bra Lady. I’m wearing a bra that fits super well in this shot. You can definitely tell a difference.

It was daunting to go in for a custom fitting but I’m a convert, now. I definitely feel way more confident in my choice of size and style.

Bevin blogs about the relentless pursuit of her joy at QueerFatFemme.com.

Bevin has written 1 article for us.