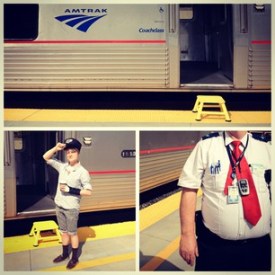 Why yes, sir, I did want to wear your conductor hat. I thought you would never ask

Being the human of questionable judgement that I am, I have elected to wend my way toward that nexus of sheer joy known as A-Camp by train. I live in Portland, which makes the trip roughly 30 hours long and approximately completely awesome.

On the train, you spend a lot of time thinking about being on the train. Here are those unfettered thoughts and observations, as recorded at a not-too-impressive amount of miles per hour.

List of things I brought on the train (and their status as of departure + 4.5 hours)

(1) Cold beer (drank it immediately to ‘wind down’ after running down the train platform)
1.75 liters of screw top red wine poured into an aluminum water bottle
1 pack smooth mellow American Spirit cigarettes, which are like not smoking at all
2 avocado and hummus sandwiches (1 down)
10 .5 mg clonazepam (emergency use only) (prescribed)
Altoid mini tin of marijuana (prescribed)
2 egregiously large chocolate cookies
1 lemonade of sorts
Assorted organic whatnots 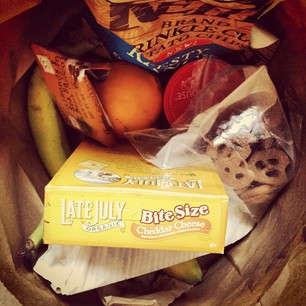 Forgetting a toothbrush (bought one on the train for one dollar! win!)
Not supplying my own fount of caffeine
Forgetting a blanket. I will pay for this one. 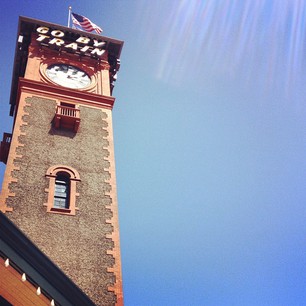 It begins! Leaving beautiful PDX… See you in 30 hours, LA!

2:30 PM: And we’re off! Portland is sunny and gorgeous, but I guess I’m going to California where it is always sunny and gorgeous so I can’t complain! The woman on the platform said she’d give me an oceanside seat, because that’s the kind of small kindness she has to dole out.

5:30 PM: We stopped in Eugene, Oregon so the smokers could stop vibrating in their seats and driving everyone insane. A girl in my aisle who seems queerish got up and looked excited, so naturally I followed her because I wanted to be excited too. I stood striking my coolest I-don’t-give-a-fuck pose about 10 feet away from her, devil may care and all, you know, the whole deal. Unfortunately, I forgot to forget a lighter, because that’s the only real way to start a conversation with another human. Other unsavory humans approached me employing this tactic while the maybequeer hit a tiny joint there on the other side of the train tracks, holding it tucked in her hand which is a move I can never really pull off — I just burn myself. I saw her 20 minutes later on the bottom level where they keep the luggage, eyes fixed out the window, just standing there.

6:30 PM: I’m in the observation car now, which is kind of cool, especially because we’re going into a lightning storm. In the observation car, the glass stretches up to the ceiling so you can take in the scenery as it passes or effortlessly avert your gaze from the meth heads who hopped on board at the last stop.

I recognize the man stuffed away in the bottom level snack cart. He calls me honey, which I like. He calls everyone honey. He is old with leathery skin and a toothy grin. There used to to be two snack vendors, he says, but not since ’82. He is making hot dogs, but I just want some watery coffee and to get away from the hot dogs. 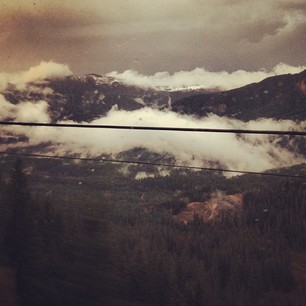 Fog rolling in at the northern Oregon Cascades

7:30 PM: We’re slipping along a muddy stretch of the Oregon cascades. It’s beautiful… today there’s rain, even though there’s snow on the ground too. There’s a deep valley winding around the edge and every now and again you get a glimpse of white through through the fir trees. Not snow or sky, just white. Like negative space, with no borders at all.

8:00 PM: What kind of people take the train? People with time on their hands, maybe. Wayward people. Lots of people in transition. The girl sitting next to me is “between everything” and works the herring season up in Alaska. She said her steel toed boots freeze through and showed me how big a herring is with her hands. They’re pretty small. She told me that one time she just kept petting one of the fish with her hand because it was so beautiful. I think I’d like herring too.

10:30 PM: Train travel feels falsely survival oriented, kind of like a lot of modern camping. Assessing my resources, I have roughly a third of a bottle of wine and some pretty choice salted chocolate to trade. Still no blankets have manifested out of my bartery interactions. Travelers seem evenly split between people who care about getting shitfaced and people who care about their carbon footprint. Why are both of my feet asleep?

11:00 PM: Hanging out in the observation car again, now with the ne’er do wells. Was hoping the maybequeer might be a relative train night owl, but she is sleeping in a small stoned ball against the window.

11:15 PM: Train drama! Some guy in all camo and a Led Zeppelin shirt is apparently being much more obvious about his boozing than the rest of us. The conductor suggested she would let him off in the middle of the tracks where he would surely perish at the hands of bears indigenous to the area.

Now some other seeming methhead is very excitedly/nonlinearly recounting a story about a boulder crushing the last train he was on. Huh. He’s carrying around some kind of container the size of a propane tank which he keeps sipping out of. We should swap moonshine recipes. I wonder if he has a Pinterest account? 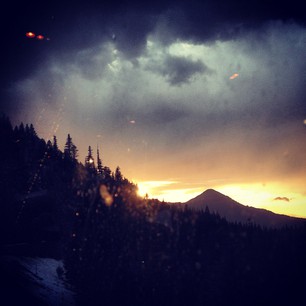 This shit is like international waters. You can do whatever the hell you want on the train, just maybe like, be 3% discreet about that thing. We got off in Klamath Falls, Oregon briefly and people were basically leaping onto the platform in a plume of pot smoke. I think we should hold an Amtrak tribunal for our transgressor. I wonder if trains have ordained ministers, like ship captains? I want the snack man to wed me and the little stoned girlball.

11:30 PM: I ate three identical sandwiches today. That’s sort of weird and definitely way more sandwiches than I usually eat per day. I ate one preemptively in a panic at home. The other two were survival fodder. It was either me or them.

11:45 PM: I think I’m sleepy but it just seems like kind of a big commitment.