Well here we are again at the Oscars. Did I see all the nominees this year? Nope. Not even close. But I gave it an awful good try. In case you forgot, these are some of the top nominees.

You can read the full list of nominees and some of my feelings from a few weeks ago here.

Melissa McCarthy always looks so elegant at these things. Rose Byrne should have her hair in a long bob forever. 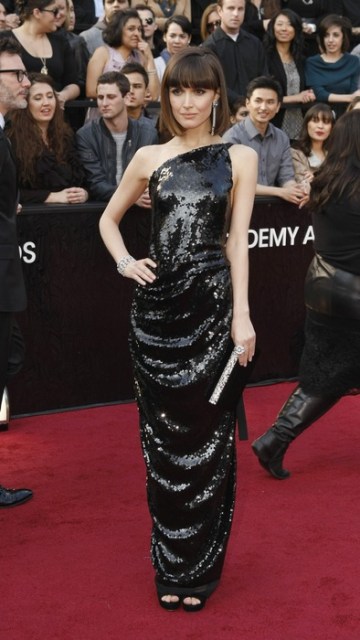 Rooney Mara looks just a little bit like she attached a gown to the bottom of a bra from the 40s. 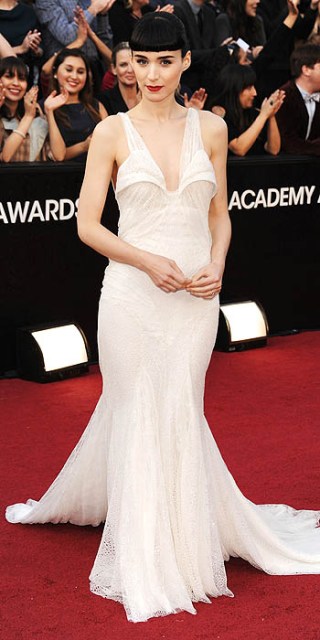 Follow-up Question: Who is Jessica Chastain?

Oh Maya Rudolph. Maybe I should have given Up All Night a better shot.

Emma Stone is beautiful and amazing. 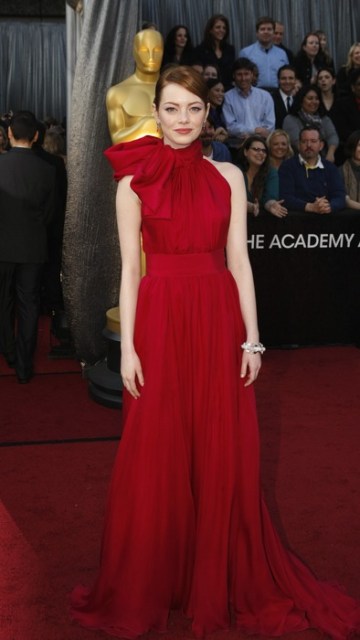 It’s not that I have a problem with what Gwyneth Paltrow is wearing, it’s just that I wonder if anyone else knows that she’s wearing a cape. 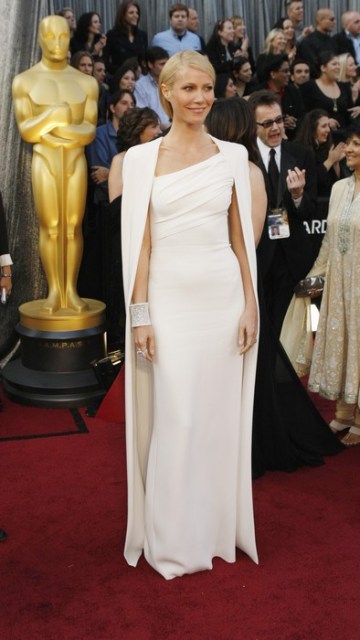 Meryl (we’re on a first name basis) is dressed like an Oscar to win an Oscar. 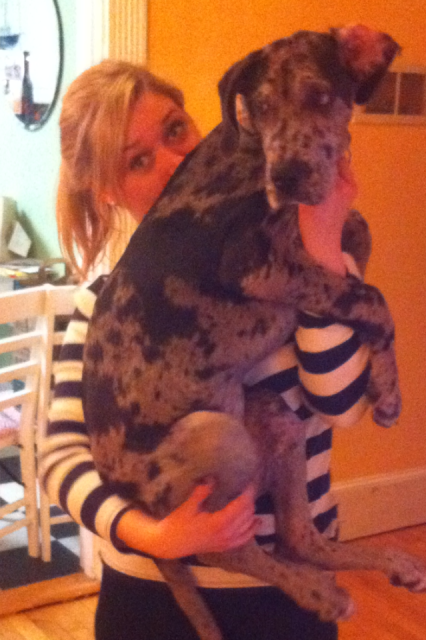 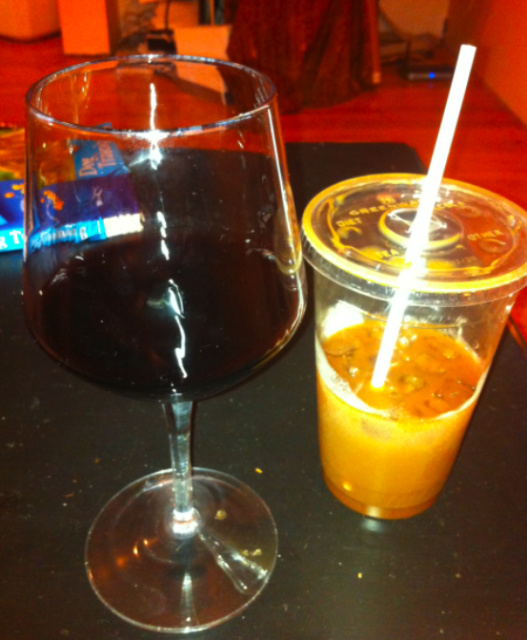 THIS EPISODE OF THE OSCARS IS PRESENTED TO YOU BY THE LETTERS W, I, N AND E

8:35pm: Am I a sellout if I like Billy Crystal’s opening montage? 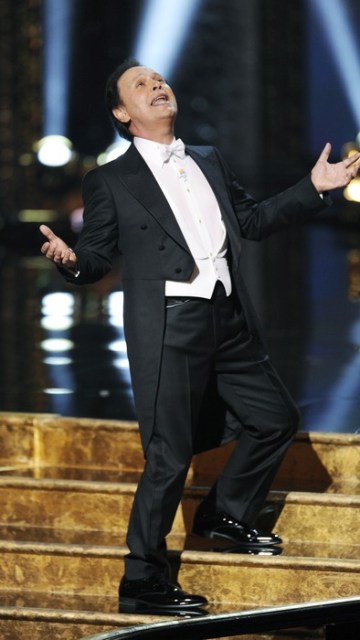 WHY OH WHY DID I VOLUNTEER TO DO THIS?!

8:43pm: What on earth do I have to do to become a Celebrity Seat Filler?

The Artist
The Girl With the Dragon Tattoo
WINNER: Hugo
The Tree of Life
War Horse

8:54pm:
Me: Wait. What the hell was that movie montage about?
Roommate: Uh. Movies? Hash tag filler.
Dog: Woof

8:55pm: I love what they just did with the costume designers nominations. Such an important part of movies and soooo overlooked. Whatever I can be pretentious if I want to. 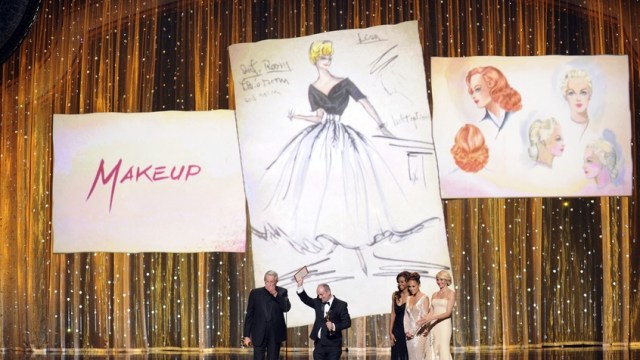 Excellent. Jane Eyre rocked.
**Update: Apparently Jane Eyre didn’t win. Apparently I just wanted it to so badly that I created an alternate universe where it did.

8:59pm: Is there a not-dumb way of saying that make-up is amazing? Also I can’t even handle how fucking funny that turn-pose joke fail was. 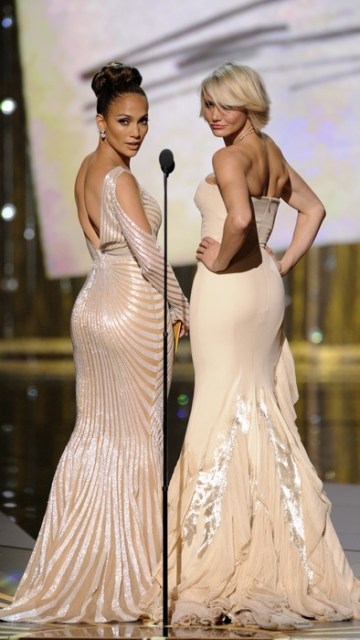 9:02pm: The first movie I saw in theater… just kidding I don’t remember and this montage is too boring for me to even make one up. Um. Are movies doing really badly these days? Is this PSA for going to the movies?

9:06pm: Just checking. The joke was that Sandra Bullock was just speaking in German?

9:09pm: Where is Christian Bale from? Like I know “England” but I’m seriously confused by his accent. He’s dressed like black tie batman.

9:10pm: Oh. That’s who Jessica Chastain is.
Also I think that Melissa McCarthy just laughed at her own scene. Awesome. 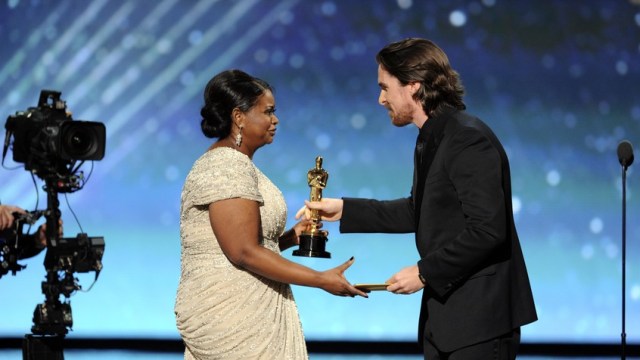 9:17pm:
Roommate: So wait, Glenn Close plays a man in Albert Nobbs?
Me: Nah I think she’s supposed to be a woman
Roommate: No… I think she plays a man…
Me: No I think we just have no idea what this movie is about

9:20pm: This fake focus group is filled with actors who’s names I can’t place. This isn’t that funny.

9:20pm: There’s an impostor on stage. Someone offered the real Bradley Cooper candy to get in a van and now he’s tied up somewhere.

The Artist
The Descendants
WINNER: The Girl With the Dragon Tattoo
Hugo
Moneyball

Drive
The Girl With the Dragon Tattoo
WINNER:Hugo
Transformers: Dark of the Moon
War Horse

9:28pm:I sort of feel like Drive should have won. That being said it was the only one of these films I saw. I guess I have to see Hugo now.

9:29pm: 10,000 Galleons for anyone who can tell me the difference between Sound Editing and Sound Mixing.

The Girl With the Dragon Tattoo
WINNER: Hugo
Moneyball
Transformers: Dark of the Moon
War Horse

9:34pm: Ms. Piggy has a lovely dress on. I think she borrowed that hairstyle from that episode of Gossip Girl where Serena is Blair’s maid of honor. 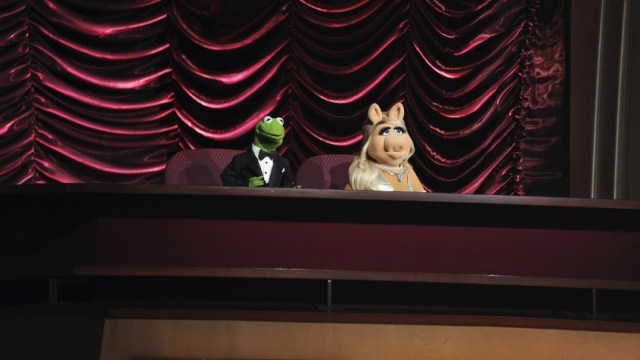 9:35pm: Meryl Streep was just so unimpressed with that popcorn gag. 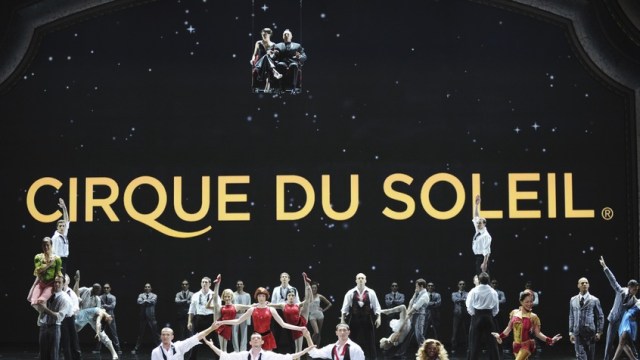 9:40pm: Robert Downey Junior’s gag doesn’t hold up. It’s not “The Artistss” and The Descendants

Hell and Back Again
If a Tree Falls: A Story of the Earth Liberation Front
Paradise Lost 3: Purgatory
Pina
WINNER: Undefeated

Documentary bros just got wicked cut off by the STFU music. Still, let’s get real. I have not seen even one of these documentaries. I’ll watch them all on Netflix on a Tuesday.

9:48pm: THIS IS SO MUCH MORE IMPORTANT THAN THE OSCARS

9:49pm: For the first time in my entire life, I’ve not seen a single movie in this category.

9:51pm: Seeing previews for Brave makes me super excited. Oh, not for the movie, but for my trip to Scotland. I mean, the movie too.

9:54pm: Emma Stone is perfect. Also she has like four inches on Ben Stiller. Also she can wear that dress every day for the rest of her life. Jonah Hill: #NotImpressed

9:56pm: I just absolutely teared up when they talked about the witches and goblins and visual effects of Harry Potter.

9:57pm:
WHAT THE ACTUAL FUCK. WHO THE FUCK DIDN’T MAKE HARRY POTTER WIN. SOMEONE NEEDS TO SEND A MEMBER OF THE ACADEMY TO THE REAPING FOR NOT GIVING THIS TO HARRY POTTER. WHAAATTT.

When Hugo won I made a gasp so loud I woke the dog.

Harry Potter and the Deathly Hallows Part 2
WINNER: Hugo
Real Steel
Rise of the Planet of the Apes
Transformers: Dark of the Moon

Christopher Plummer probably deserved that. Also his imdb just crashed. But I can tell you anyways he played the husband/dad in Sound of Music.

10:06pm: What are you doing April 4th? ‘Cause I’ll be sobbing my eyes out at the 100th anniversary of the Titanic sinking a.k.a. the day Titanic comes out in 3D.

10:07pm: FYI my roommate and I are playing the Screan Actor’s Guild drinking game. You drink every time someone says “Scorsese.”

10:10pm: Thank god they panned to that dog because this voice over bit with the actors in the audience is so boring.

Sorry guys. Still haven’t made it through the trailer.

10:17pm: Wait. Are Will Ferrell and Zach Galifianakis seriously just smashing cymbals in Brangelina’s face? Is this a metaphor for their first time at the movies? I’m going to stop now because there’s no joke I can make as funny as Zach Galifianakis mispronouncing his own name. I have DVR and rewinded to watch it again.

10:20pm: Obviously Man or Muppet should win here. On a related note, are we seriously not going to get to see this performed live? 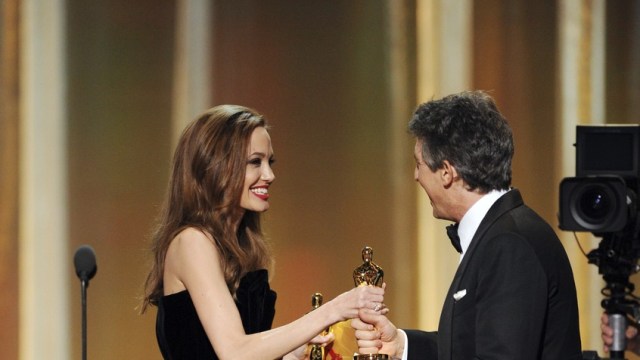 Jim Rash is totally the dean on Community isn’t he. As a side note, The Ides of March was weird because the writing was so good and the acting was truly just terrible. Evan Rachel Wood Bisexual blew it for the team.

YES. That’s how we do it Woody style!

10:37pm: Sorry for the delay. This just crashed the server a little bit.

10:40pm: I’m really tired of everyone parading the women from Bridesmaids around like they’re the first funny women in the world.

The Barber of Birmingham: Foot Soldier of the Civil Rights Movement
God Is the Bigger Elvis
Incident in New Baghdad
WINNER: Saving Face
The Tsunami and the Cherry Blossom

10:46pm: Guys, guys, guys. I actually watched all of the short animated films. Except La Luna which no one was allowed to watch. The Fantastic Flying Books of Mr. Morris Lessmore deserves it by leaps and bounds.

Also, my parents are really proud of me about the whole Weblog of the Year situation!

10:51pm:
They’re presenting for Directing. My biggest concern is whether we should open another bottle of wine.

10:55pm:
The Artists? Fuck the Artist. I hope nothing interesting happened during the acceptance speach because I used that time to use the bathroom.

Also, for those waiting in suspense, we opened another bottle.

11:03pm: I never ever ever ever want to watch the In Memoriam part of the show. Now that I’m old enough to know who they’re talking about it’s just sad.

But yo. Who is that biddie singing? ‘Cause she can Get It. 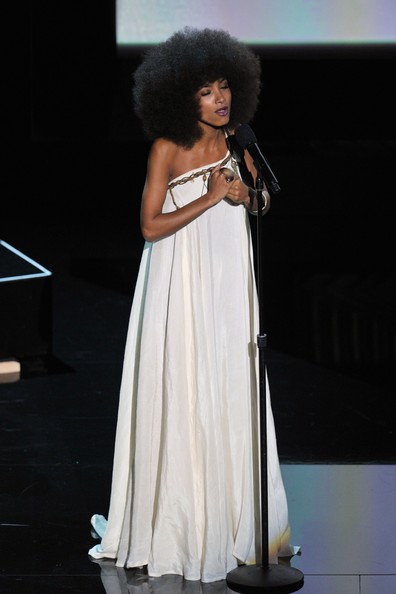 11:06pm: Is it disrespectful to wonder why thats the only picture of Steve Jobs anyone has?

11:07pm: Obviously that In Memoriam was just for the 2011 calendar year because it didn’t reference Whitney Houston in The Bodyguard.

11:13pm: I could not be more bored of the Magic of the Movies montages.

Also, apparently that was Esperanza Spalding. My bad.

I wish The Artist would stop winning things because I’m so so obviously never ever going to see it.

11:23pm: How is this still going on? I almost wish the creepy circus would come back. Can’t we just have John Williams conduct a few numbers?

11:25pm:
[re: Albert Nobbs]
Roommate: Wait. So wait. She’s pretending to be a man because she’s a lesbian or to be a business owner?
Me: Dude. We still haven’t seen the movie.

11:27pm: I think I just really like Colin Firth for no reason. Also Meryl Streep should be the leading lady in all films.

Psyched to see Meryl Streep take it! She’s so amazing. I just want to take this moment to remind you guys about her overalls in Mama Mia!

Roommate: But you just know Glenn Close is thinking, “WHAT? But I played a woman playing a man!
Me: Or something.
Roommate: True. I guess we still don’t know.
Dog: Woof.

11:33pm: I’m rooting 100,000% for Midnight in Paris even though Woody isn’t even going to show up to collect. Don’t care. I actually, technically, legally seen Midnight in paris five times. Next time I really should just buy it for myself.

11:38pm: Gotta love that they brought the dog on stage.

11:40pm: So what did Team Oscar Liveblog think of tonight?

Roommate: No. I’m not going to take a picture with a sideways thumb in front of my face. I’m not having that on the internet.
Dog: 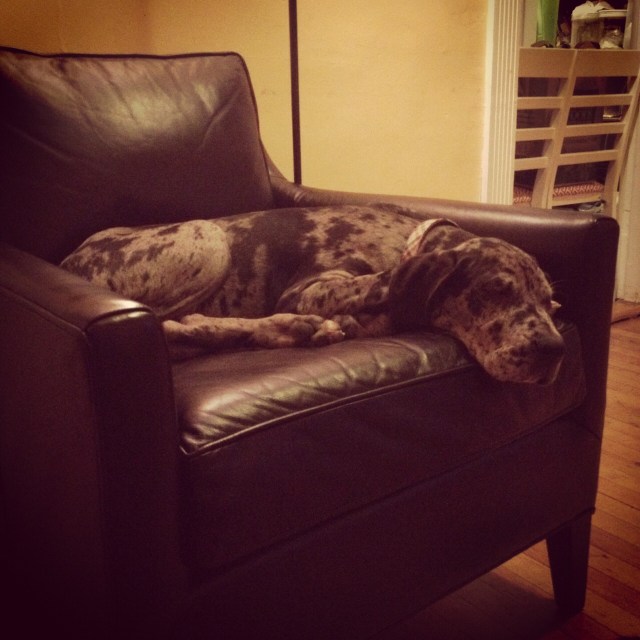 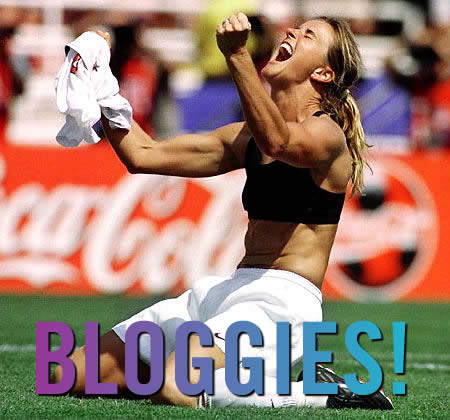 Alrighty. Well that was the Oscars. This shit was boring. I hope next year they can get Billy Crystal form 20 years ago to host.

Images via The Oscars Homepage unless otherwise specified