An ordinary girl would see she was out of milk and go get some milk for her cereal. But you’re not an ordinary girl. You already put the cereal on your bowl, and now you find out there’s no milk. Life is unfair, just like the U.S. Government. Hot tip: what is milk if not cream with a lot of water in it???? These are the kinds of things we’re going to have to start figuring out for ourselves.

2. A handful of potato chips wrapped in a paper towel

If she’d told you only bread-ends were left you would’ve gotten more bread when you stopped at the store after work, but it’s fine, because everything is. Everything is fine.

4. Condiments or spreads off a spoon, while standing up

Eating a condiment (e.g., mustard) or a spread (e.g., hummus, peanut butter) off a spoon can serve as an excellent pre-game or post-game to the potato chips. It could even be both, because you might want more paper towel potato chips soon. It’s not dead yet. Like you! Which is something.

You made bacon this morning and now everything smells like bacon! Does your cat smell like bacon? Maybe eat your cat.

Watch out, ladies: it takes a village to raise a child and it takes an orchard to make a human-sized smoothie. One banana = one tablespoon of smoothie. Why? I don’t know, it defies the odds. Put an entire bucket of ice in there and see what happens. Call it “the ice bucket challenge.” Don’t worry either way, as long as you see your glass as half-full, you’ve gotten your daily allowance of optimism!

Eating a sandwich you don’t like is sad, but wasting $15 on a sandwich at Whole Foods is sadder.

You’re a grown woman. You can do whatever you want, whenever you want to! That’s why you should treat yourself to a grown-up meal every now and then — no — a FANCY meal! Nothing says “fancy” like a baked potato, steak and maybe some greens. But here’s the catch: somehow, this combo, which looks absolutely mouth-watering in advertisements for Sizzler et al, does not maintain its glowing appearance when you make it at home. Instead it looks like the last meal of a tragic lounge singer, eaten off a piano bench in a smoky room filled with sad people waiting to die. (Please @ me about this)

Like breakfast for dinner, but sadder. It’s 10 AM somewhere.

Last week I saw a thing Yvonne made on Instagram, which she’d also told us about already in our “virtual office,” and I thought to myself “that looks good, you should —” and then I stopped talking to myself before I said “try to make that” because I am a self-aware and realistic person, in touch with all my faults and limitations.

12. That thing your ex used to make

See above: know your limitations.

13. Anything that died on the line, especially if it was your fault

This one’s for all my servers out there eyeing that sweet dish dying on the end of the line, waiting for the perfect moment to slip it into a to-go box and hide in the walk-in freezer to eat it before your armpit sweat turns to ice. BRRRR. Or you could bring it home, although once I did that with a P-SHRIMP at the Mac Grill and ended up with the worst food poisoning of my life. I won’t give you the details because it would be off-brand for me as the person who does not enjoy toilet-related conversations, but just imagine the worst, okay?

14. 3-4 beige/light orange items on the same plate, from the freezer

Some ideas: chicken nuggets, pizza rolls, crispy egg rolls, off-brand tater tots, mozzarella sticks, jalapeño poppers. I could go on; but must I? We both know what the deal is here.

15. Anything for sale in Terminal 6 of the Los Angeles Airport

We all know that Los Angeles is the city of dreams, but we also know that a place where dreams can live is also a place where dreams can die. For example: Terminal 6. Specifically, that “Farmer’s Market” is no Farmer’s Market friend of mine. There’s nothing there for you unless you want to eat somebody else’s carry-on. It’s never a bad idea to have a Lara Bar in your back pocket. They named it after a woman for a reason.

16. A plate of spaghetti, a mug of coffee, 1.5 broken-up rolls and a handful of pills, using your toilet as a table.

This wasn’t my idea actually, I found it on shutterstock and can’t stop thinking about it. 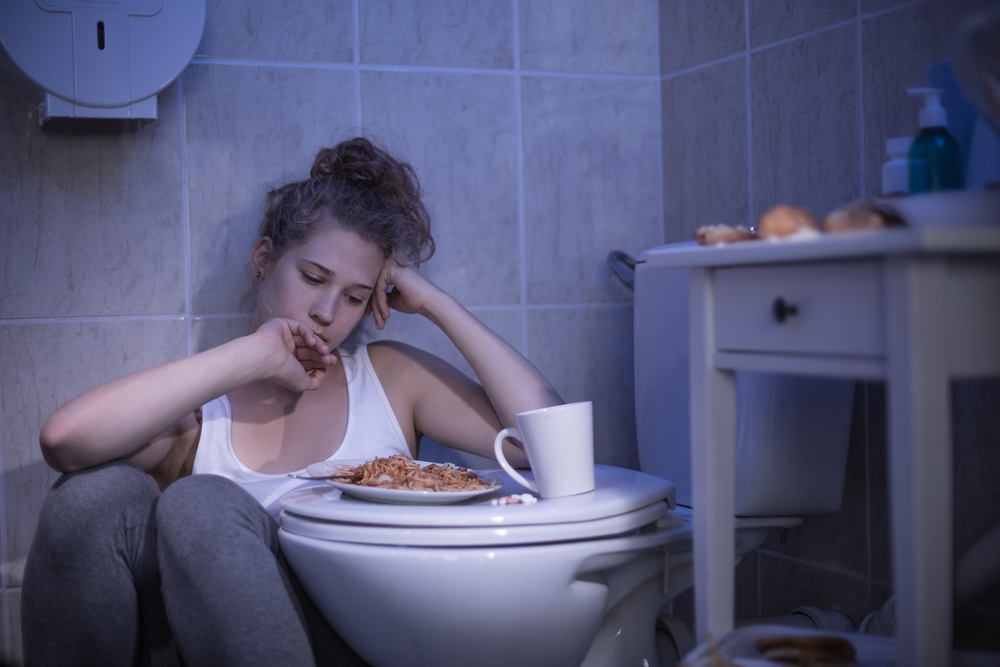 Although TBH if this was me, the mug would be full of white wine

Actually this would make you feel worse than you already feel, because you also can’t use the bathroom. So definitely don’t do this. Maybe have these cashews or these marshmallows instead, and then you’ll feel much better than you felt when you woke up this morning, afraid of never having health insurance again.