For many trans people, 2020 just revealed to the general public the kind of inequities that they had always been facing. For others, the pandemic heightened barriers to important resources like housing and healthcare, which have long been withheld from trans people.

What 2020 has also shown us is exactly how bright trans people shine in a world that tries to dim us until we disappear. Trans people have been the leaders we need.

1. Modeling Mutual Aid Before It Became a Commonplace Term

Calls for mutual aid circulated widely at the start of the pandemic, when our families were losing jobs and wondering how to pay rent. Donations poured into mutual aid funds to support individuals who didn’t have the means to eat, while many elected officials and the rich fled to quarantine in their vacation homes.

But prior to the pandemic, trans people have long practiced mutual aid in order to keep their people alive. For the Gworls, run by Asanni Armon, helped keep Black trans femmes housed by hosting celebrations and redistributing entrance fees. Black and Pink, with local chapters across the country, made sure people who were incarcerated were not forgotten by fundraising for hygiene supplies. Meanwhile, COVID-19 rates were exponentially multiplying in prisons that had already jeopardized trans lives, contributing to the deaths of Layleen Polanco and Roxsana Hernandez, among others.

2. The Launch of the Trans Journalists Association

Started in February of 2020, the Trans Journalists Association (TJA) filled in glaring gaps within the reporting practices about trans lives. Both in life and in death, trans people have regularly been referred to by their birth name and assigned sex, rather than by who we say we are. Often, community members are left to advocate for our friends against a hostile press.

TJA has created a comprehensive guide for the media to combat insensitive reporting, covering correct pronoun usage, harmful stereotypes, and disinformation. It also has provided tools for employers to diversify their newsrooms and create equitable environments after trans reporters are hired.

3. Leading the Uprisings for Black Lives

Hours after George Floyd was murdered at the end of May, Black trans and queer organizers in Minneapolis mobilized to petition for the police to be defunded. This demand caught fire across the country, shedding light on the legacy of police officers as modern iterations of slave patrols and agents of genocide against Indigenous people.

Organizations like Reclaim the Block and Black Visions Collective in Minneapolis reminded the world to dream of liberation. They are not alone. Local organizers across the country had long called for the abolition of police and prisons, as they only exist to harm marginalized people. What grassroots power showed us during these uprisings is that our communities have long kept us safe and the solutions lie within our commitment to one another.

The Brooklyn Liberation March in June is speculated to have had the largest turnout for trans people ever. Black trans community organizers were at the center of the event, highlighting how Black trans women in particular were both targets for lethal violence and Black trans leaders were dismissed by movements for justice.

“I believe in Black trans power” is a phrase immortalized by Raquel Willis, former executive editor at Out and now communications director at Ms. Foundation. The march was a culminating event based on a legacy of interdependence. Generations of Black trans people like Marsha P. Johnson and Miss Major had been building the power that called on thousands of people this year to show up.

Two transgender migrants, Chin Tsui and Sza Sza, were released from migrant prisons this year, thanks to the work of Transgender Law Center and the Black LGBTQIA+ Migrant Project.

Faced with neglect from institutions meant to deliver resources to the public, trans migrants often creatively make ends meet with labor that is unjustly criminalized by the state. Some trans migrants are even profiled by police as criminals even when they aren’t engaging in any illegal activity.

Chin Tsui and Sza Sza had their lives on the line. They had to protect themselves against transphobic violence in addition to a virus that had been spreading in prisons. Campaigns that coupled legal strategies with public pressure led to their release.

A monumental victory after a barrage of discriminatory rules unleashed by the Trump administration, the landmark decision over the summer ruled that LGBTQ workers were protected under the 1964 Civil Rights Act.

The ruling came as a relief. It meant that LGBTQ people had legal precedent to assert their rights when enduring the kind of mistreatment by doctors and homeless shelters that was openly encouraged by the government. But this couldn’t have happened without the brilliance of trans lawyer Chase Strangio and the advocacy of Laverne Cox, who created a media firestorm surrounding the case.

7. The Release of the Disclosure Documentary

Policy must be coupled with culture changes in order for trans people to truly claim liberation. Disclosure, another project helmed by Laverne Cox as executive producer, documented the media representations that contributed to the stigma associated with trans lives.

Starting with early portrayals of gender transition as uncivilized, the documentary takes us through to present day. Now, trans characters are onscreen more frequently than ever, but rarely played by trans actors. The title draws associations of the pivotal moment when cisgender people discover the assigned sex of a trans person, but in this case, the disclosure moment is a reclamation of power by filmmaker Sam Feder.

In July, Lurie Children’s Hospital in Chicago put forth an apology and promised to end surgeries on intersex babies. As a community with little visibility and ongoing abuse from the medical establishment, intersex community organizers have had to build up public knowledge for decades. 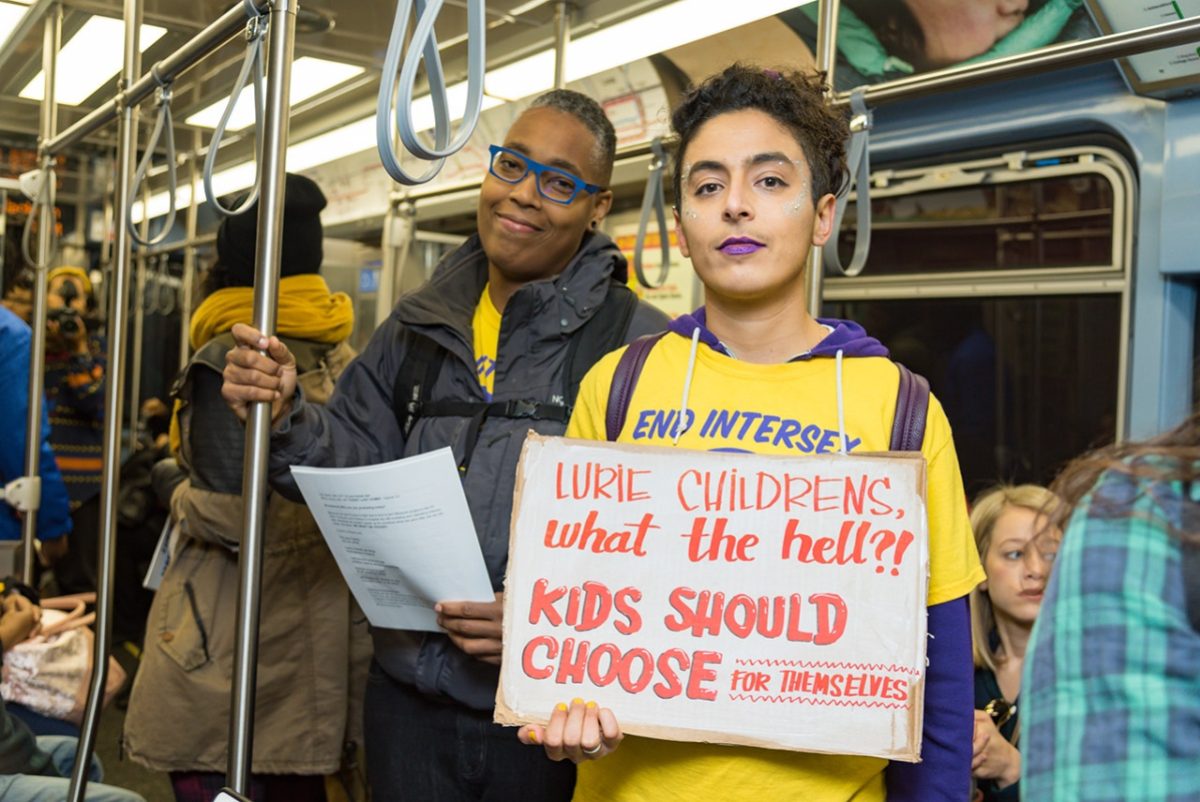 Many intersex people are also transgender, as they do not identify with the sex they were forcibly assigned at birth. The campaign was won by two trans and intersex advocates who co-founded the Intersex Justice Project: Sean Saifa Wall and Pidgeon Pagonis. In October, Boston Children’s Hospital also issued an overdue apology and a commitment to ending certain surgeries on intersex babies. The momentum that’s building around the inherent dignity of intersex people cannot be overstated.

Trans and gender nonconforming artists have rarely been acknowledged as the cutting edge of artistic disciplines but much of mainstream art has been influenced by many of our communities. Pose documents the ballroom scene of New York that taught Madonna how to vogue. Icons like Big Freedia who helped popularize the bounce genre of music. Beyoncé, Drake, and Lizzo have all either used samples or collaborated with Big Freedia over recent years.

This year, Venezuelan trans artist Arca received the recognition she deserved with a Grammy nomination for best electronic/dance album. Prior to this recognition, she had collaborated with Kanye West, Bjork, FKA Twigs, and Frank Ocean.

Our community also rightfully took up space in magazine covers. After being snubbed by the Emmy Awards along with the rest of the Pose cast, Indya Moore took the rest of the year by storm with a cover on both Vogue Italia and Vogue India. Among those who worked with Vogue are also Chella Man and Aaron Philip, two trans disabled models of color who have been pushing the industry to meaningfully invest in trans and disabled talent.

The year ended with a celebration. Many trans communities got to see their own friends and family members take on elected positions within government.

Among notable firsts, Stephanie Byers of the Chickasaw nation became the first trans Native American to hold public office in the country. She joins a record number of Native women who have been elected this year. Trans women took on races in areas without a large population of LGBTQ people and it paid off: Taylor Small became the first openly trans person elected to the Vermont legislature, Brianna Titone won in Colorado against a Republican who ran transphobic ads against her, and Mauree Turner became the first openly nonbinary legislator in the Oklahoma state house.

Sarah McBride—among the brilliant trans artists, service workers, caretakers, and community organizers who were our heroes this year—gave us the unapologetic energy we needed to take more power for ourselves next year. An anonymous person messaged her on Twitter asking, “I am confused, are you a boy or a girl?”

Hope that clears things up. pic.twitter.com/6JjBjG4QAO