When ladies in sci-fi movies and shows aren’t pegged down as eye-candy or arm-candy, they get to kick some serious ass and wield some even more serious firepower. And we’d like to honor these unsung sci-fi heroine hotties with our (sure to be contentious) Top 10. Enjoy! 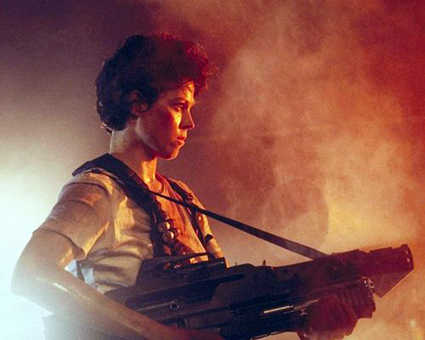 Long before Sigourney Weaver was preaching at blue cat-people, she was kicking some serious acid-blooded ass as Ellen Ripley in Alien. The character was initially written as a male part, but thank goodness the producers changed their minds and cast Sigourney Weaver. If it weren’t for her honest and nuanced portrayal of terror, bravery and heroism, Ripley could’ve wound up as just another throw-away sci-fi hardass. But instead, we have Ellen Ripley. The perfect heroine. The greatest science fiction heroine of all time. Yes, all time.

In the final installment of the trilogy, Ripley shaved her head and sacrificed herself by leaping into a furnace whilst a baby alien burst out of her chest (ew). Top that. 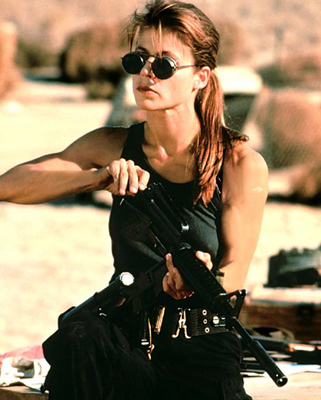 When T2 hit theaters, so did an entirely new spin on Sarah Connor. She spent her years locked in a mental institution preparing to protect herself and her son from Sky Net, where she luckily had time to do a lot of bicep curls for our viewing enjoyment. On the outside, Sarah Connor may be hard and stoic, but she’s driven by the love for her son and her will to protect him, hell or high water. This is maternal-instinct turned really, really sexy. 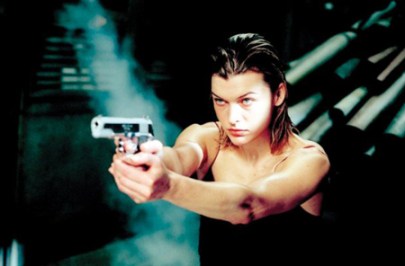 After waking up with amnesia and following a team of commandoes into the heart of the zombie darkness, so to speak, Alice finds herself surrounded by crazy undead people infected with the “T Virus.” While everyone else is too busy panicking, wasting bullets or getting chomped on, Alice is on the frontlines dispatching zombies by busting necks with her hands, fancy roundhouse kicks and her thighs. Repeat: her thighs. Needless to say, she was the last lady standing. 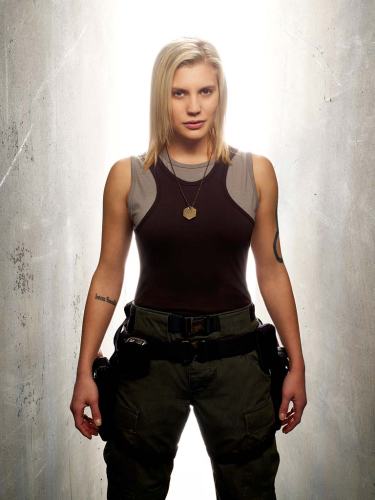 2004’s reimagined Battlestar Galactica series flipped the gender of Starbuck, and thank everything holy that they did. When we first meet Starbuck v2.0, she’s boozing it up and gambling everything away while chomping on a cigar like a pro. Needless to say, the masculine energy of the original Starbuck isn’t lost, and we are gifted with Kara Thrace, the incredibly hot ace fighter-pilot who absolutely oozes butch machismo. Watching her character evolve from a trouble-making rogue to an interplanetary visionary is a tv-trip worth taking time and time again. BSG is a wickedly clever show, and the creators managed to queer Kara Thrace into one of the most fantastic dyke icons on television without even making her gay. 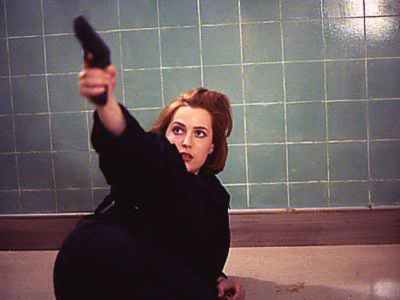 Not only did Special Agent Dana Scully help us realize how incredibly gay we are, but she showed the rest of the world how a whip-smart woman can be a dead sexy too. Recruited right out of college by the FBI, Scully was assigned to the X-Files, often employing her medical talents as a forensic pathologist and her sexiness talents as a sexy sexbomb. Scully played the “man of science” to Mulder’s “man of faith” in a refreshing, if basic, gender role-reversal. But Scully was not without nuance; her impenetrable stoicism lapsed into existential vulnerability from time to time, and those moments of tenderness made all the rest even more worthwhile.

Also, I think we mentioned this, but she made us all gay. 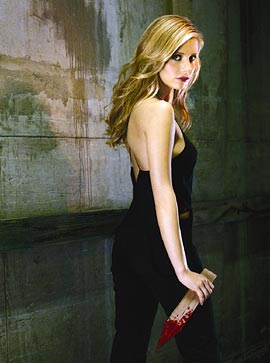 While most teenage girls in suburbia spend their evenings hanging out with friends and sexting on their Kins, Buffy Summers was tasked with local demon-extermination to protect her community of good ol’ Sunnydale. Sure, she had her share of boy (and girl, in the season 8 comics!) troubles, but her duty as vampire slayer always trumped her more teenaged concerns. And Buffy kicked ass, heartily: she didn’t even get a gun, just some stakes and the occasional crossbow. 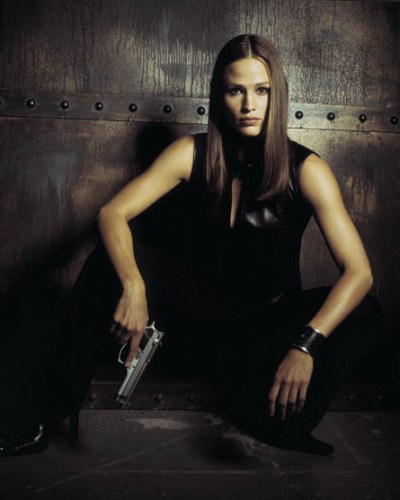 Sure, action-packed government conspiracy dramas are a dime a dozen, but Sydney Bristow isn’t your everyday special agent. Bristow gets to play with her fair share of high-tech gadgets and dons an endless array of disguises, but she gets her entire world turned upside-down in the process. We’ve got a lot of respect for a lady who gets tortured, shot, brainwashed, watches her loved ones get slaughtered, becomes a mother, learns she was trained as a sleeper agent from childhood and still managed to keep her shit together most of the time. 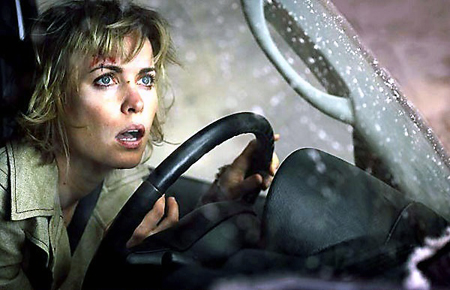 They say that a woman could lift a car singlehandedly if her child were in danger, and when Rose da Silva’s daughter Sharon wanders off into the foggy town of Silent Hill, we’re pretty convinced she could swing that, no prob. While she’s never tasked with lifting a Ford Taurus or anything, she does have to survive ultra-creepy monster Pyramid Head, and shit like that should really earn you a purple heart or two. When Rose’s ferocious motherly (MILF-erly) instincts kick in, she’s gotta got to hell and back to save her daughter. And in this case hell involves weapon-wielding nurse-monsters– yikes. They both make it out alive in the end, of course, and it’s all because of Rose’s willingness to make the ultimate sacrifice for her daughter. We love a mom who can throw down– can you tell? Also, if you’d like to see Radha Mitchell get down, go watch High Art. 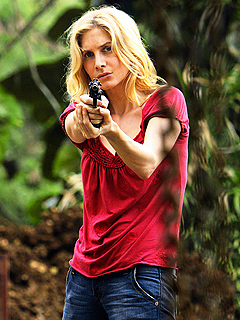 Juliet was a fertility doctor recruited to the Island to help solve some mysterious LOST-type phenomenon or another. And while she certainly got off-track in that endeavor, Juliet brought compassion to the camp of “the others.” Most of the female characters on the show were defined by the men they loved or fluttered between, but Juliet retained her tough individual spirit even when she and Sawyer paired up, in alterna-retroworld. Juliet was smart, tough, composed and even brave enough to detonate an atomic bomb (literally) by hand. 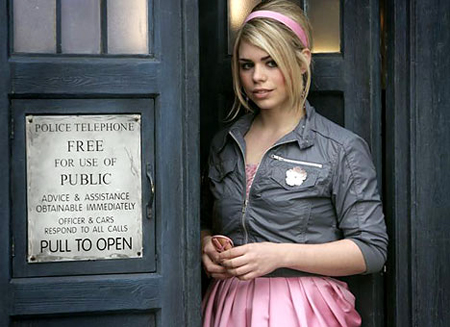 Don’t let the pink head band and shapely eyebrows fool you: Rose Tyler does not mess around.  Rose started out as little more than a wide eyed shop-girl when the Doctor came storming into her life, but evolved into one of his most capable and intelligent companions over her two seasons. Instead of spending all of her time being cheeky or fawning over the Doctor, she made herself useful and faced off with some of his worst enemies without batting a well-mascaraed eyelash. With intelligence enough to outthink her ancient alien escort and bravery enough to cross time dimensions (that shit is tough), Rose is exactly the type of sidekick you’d want to have around in a tough, inter-dimensional spot.

No list could be complete without the poker-faced Trinity, played by Carrie-Ann Moss in the Matrix trilogy. While many of our hot sci-fi babes have a kind of rugged appeal, Trinity is a master-hacker who looks like she got dipped in a pool of molten leather. Trinity is super hot, has a semi-alternative lifestyle haircut, and not only does she pack heat, she can also just pwn your face using only 1s and 0s.

So that’s our top 10! What does your list look like? Tell us in the comments who you’d choose as the ultimate bangin’ sci-fi heroine. I have a feeling this is gonna turn into the British House of Commons in no time flat.

Rachel has written 3 articles for us.