A few weeks ago my friend Dana and I were messaging on Instagram, as you do, and she told me she’d been lying on her floor all day sweating, and I said I hoped the floor was comfy at least, and she said “it’s not the worst floor I’ve ever lied on,” and then I burst out laughing and said I should pitch an Autostraddle article titled “Floors I’ve Lied On, Ranked”, and then Dana suggested that I check to see if the correct verb is “lied” or “laid” but I never did that, I just pitched the list, and the editors said yes, and now here we are! [ed note: the correct verb when a direct object is being used, ex. “I lay the blanket on the bed,” is “lay;” the correct verb when Vanessa is lying on the floor herself without a direct object is “lie.”]

Join me on this short journey of 10 floors I’ve lied (laid?) on, ranked, and then please talk to me in the comments about all the floors you’ve ever lied (laid?) on, all the things you’ve done there, all the feelings you’ve ever felt. You know, just regular low key gay conversation. Just queers being queer! Nothing to see here, everything is normal, we are all! totally! fine! 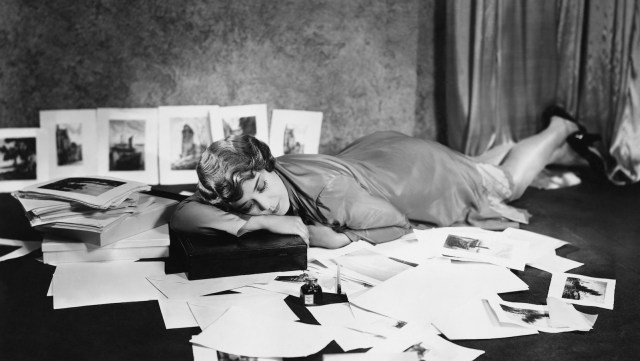 10. My bedroom floor when it is clean

This is where we begin, because I feel like this is kind of best-case scenario? And for the sake of this list I decided “best case” is definitely #10, because we’re working up to the most horrifying scenario, which will be #1. There’s nothing horrifying about lying on your bedroom floor when it is clean – I do this once a week, minimum. Sometimes you just need to lie on the floor, even when your bed is right there, and that’s completely okay.

9. My bedroom floor when it is covered in dirty laundry, clean laundry, Lara Bar wrappers, sex toys, and glitter

8. The kitchen floor in my sixth-floor walk-up apartment in Williamsburg that got really amazing afternoon light

I felt a lot of feelings in 2013. They were all best felt on the cool tile of that huge kitchen, until the day came when I was home alone in the apartment, lying on the kitchen floor, basking in the beautiful buttery yellow light and listening to the soothing hum of the J train which we could hear as clearly as if our apartment was built on top of the train track itself, and a fat grey mouse scampered across the room. And touched my foot on its way. I howled. I never felt my feelings on that floor ever again, I took my feelings directly to our neighborhood bar and never looked back. I did not ever lie on the floor there, bless.

7. The bathroom floor in that same apartment after my then-girlfriend told me she had just made out with her straight best friend

In retrospect this was not a big deal at all but at the time it felt like The Ultimate Betrayal and honestly I took a lot of self righteous joy in locking myself in the bathroom, squishing myself into a position wherein I could actually lie on the floor (this bathroom was TINY), and refusing to come out while my then girlfriend banged on the door and I sobbed.

6. The bedroom floor of the two-year-old I used to nanny, the day after Donald Trump was elected

This was a nice floor, because the rug was organic because the kid’s parents wanted everything he might put into his mouth to be organic (straight people – they’re sometimes the exact same as lesbians!). But you know what is not nice? Donald Trump. I went to work the day after the 2016 election, but I couldn’t stop crying and I just sort of leaned into it. Thank Lesbian Jesus the kiddo was extremely understanding for a two-year-old, and we spent most of the day in his room, lying on the floor. He played with cars and books and stuffed animals, I stared at the ceiling and cried. When he took his nap I relocated to the living room and lied on the floor there instead.

5. The kitchen floor in my current house, which is always dirty, but very cold because of our AC unit

We’re bad at our chore chart, okay? The kitchen floor is never clean. But the kitchen is the first room that you enter when you come into my house, and the AC unit lives in the kitchen, and sometimes I just need to lie down immediately upon getting home. Did you know it’s Cancer season? There are feelings to feel. So I lie on our dirty kitchen floor and feel slightly cool, and my very neat Taurus housemate definitely judges me, but it’s fine. Everything is fine.

4. The office floor at my old corporate job in NYC, specifically the nook under my desk where I used to take naps

Things I used to do at my corporate job: work on Autostraddle articles, gossip with the one other queer person on my team, text my then-girlfriend, lie on the floor under my desk and take naps. The carpet was comfortable.

3. The bathroom floor at Cosmic Cantina on Third Avenue in NYC

I don’t think this bar exists anymore, which is sad for nostalgic reasons, because it was our main hangout spot my freshman year at NYU. It is truly horrifying to me that I ever lied (laid?) on a floor in a bathroom in Manhattan, and yet. Being drunk and 18 and in love with a boy who doesn’t love you back is a really special state of mind. I would drink beer all night and it would be okay-ish, but then near the end of the night I’d always accept a flaming shot of Bacardi from Ricardo, our favorite bartender, and I would always end up in the bathroom, lying down, blacked out, calling Jon and leaving him embarrassing voicemails, usually crying. Ah, nostalgia.

2. A gravel pit in Israel, does that count as a floor

This one is weird because is a gravel pit in Israel a floor, I’m not sure. My very first serious girlfriend and I kissed for the first time in this location, lying down in a gravel pit outside of our apartment building in Israel, and I honestly thought it was the most romantic and magical thing that had ever happened to anyone. I now feel certain that either animals or children or both had definitely peed in the exact spot where we first touched lips, but I don’t care.

1. The lobby of my dorm in London when I was studying abroad and realized Emily, the first girl I ever loved, didn’t love me back

This is number one because ten years later I’m still so embarrassed about it, who allows their friends to tuck their drunken self into bed and then takes off their pajama pants and goes downstairs to lie on the floor of the lobby, Jesus Christ, but also because it is just so gay, like are you kidding, I couldn’t just cry in my room about this rejection no, I had to make a big dramatic scene and throw myself on the floor in my underwear in the lobby of our dorm building in front of the security guard and all the other students to be like “EMILY DOESN’T LOVE ME EVEN THOUGH SHE FUCKED ME LAST MONTH AND MADE ME REALIZE I LIKE GIRLS, WHAT AM I GOING TO DO, SOMEONE FLIP A TABLE LIKE THAT SCENE IN THE L WORD, THIS IS WHAT BEING GAY MEANS RIGHT?!?!” Thank goddess I’m not a baby dyke anymore. Thank goddess.