This is one of those days where we can’t really find any one story to headline because they are all sort of equally whatever, and we end up getting 65% of our links from Oh No They Didn’t. Thank you ONTD, we love you, don’t ever change. Well you did change a few weeks ago right? And we still love you. Don’t change your hair though. We love your hair, don’t change it.

Look what we do have for you here today is a video of Kristen Stewart looking very sexy at a FLAUNT magazine photoshoot:

GLEE has been renewed for a third season, obviously:

Season-to-date, Glee is the No. 1 new scripted series among adults 18-49 and adults 18-34, and has averaged 9.4 million total viewers… In just one year, Glee has transcended the television landscape and emerged as a global pop culture phenomenon,” said Peter Rice, the Fox Networks Group Entertainment Chairman, in a statement.

In case you’re confused, FYI we’re still on Season One right now — they just took a little mid-season break to make new episodes. So that means we have two more years of Glee for sure, so according to our magical calculations, that means that probs someone will either quit Glee or threaten to shut Glee down another 5,647 times.

An interview with Joss Whedon, who directed last week’s episode, Dream On, at TV is my Pacifier. On his dedication to teenaged narratives:

Well, I don’t feel like I’ve necessarily been pigeonholed. I like high school shows, needless to say, I think they tap into something very primal. When you have some elements that take them to the next level, whether it’s physical or musical, it’s the kind of thing that completely jazzes me. To work with a troupe of people who are still young, and fresh and excited to be doing the work, you can’t beat that.

A lot of parents are afraid of their children watching Glee (homos, sex, etc.) but some parents think it’s really awesome, like Dunkaroos:

“I was a geek — I got bullied so badly. It’s so lovely to see a show putting out the right message for kids, that no matter what size or shape you are, you can be accepted.”

Hey wanna go behind the scenes of tomorrow’s episode of Glee, “Bad Romance”? YEAH YOU DO!

Hey Stanford / the San Francisco area! Julie Goldman is doing a free show at the Graduate Community Center and it’s open to the public and you should definitely make plans to BE THERE. After the show, when you’re flirting her up, be sure to tell Julie that you loved her in The Runagays! 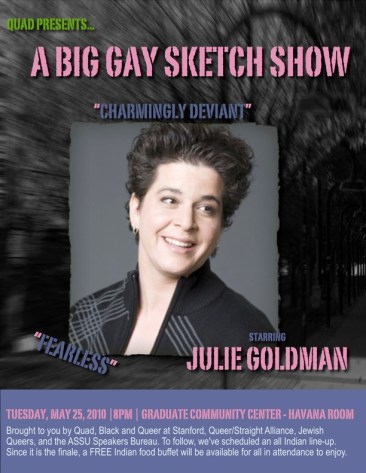 +
You can meet all of these fine ladies at Showtime’s YouTube Channel.

Tila Tequila comes clean about why she’s going to Celebrity Rehab. After getting not pregnant and not-birthing the surrogate (or not) child of a Swedish, American war vet, firefighter/rapper/The Game, and launching her frightening TilaTilaOMG gossip website, she has decided to lay off the… um. Antibiotics? Of course she can’t possibly make this announcement without dissing Lindsay Lohan in the same breath:

It almost feels like I’m stripped down totally naked and standing in front of a million people. With that said, I KNOW I am an EXTREMELY smart girl, and to run all these empires when I am not even 30 yet, is quite an accomplishment, however I finally admitted to myself that I cannot rely on taking prescription pills everyday for the rest of my life! I didn’t spend my heart and soul into building this extremely successful website, invest every last ounce of money into it, and believe me, a site like this plus staff is EXTREMELY EXPENSIVE! I also have My new Record Label and getting all the contracts done to also start up my own management firm, but in order to do all of that, I MUST not be another “LINDSAY LOHAN” where I just flush everything I worked so hard for down the toilet for nothing….

Newly out Country Music star Chely Wright will be performing at the San Francisco GLAAD Awards and Sean Hayes will be hosting The Tony Awards! (@ontopmag)

Patti Smith could’ve just given a normal Pratt Commencement Speech, but instead she spoke out on the importance of Dental Care. “Take care of your damn teeth!” (@theawl)