Trump is expected to end the Deferred Action for Childhood Arrivals (DACA) program soon. Last Friday, NBC News reported that Homeland Security Secretary Elaine Duke and Attorney General Jeff Sessions discussed the fate of the program with senior officials during a meeting at the White House. Officials say Trump is considering whether or not to let DACA gradually expire or end it immediately — both options that would greatly impact the livelihoods of more than 800,000 immigrant youth who were brought to the U.S. as children. White House press secretary Sarah Huckabee Sanders said at Friday’s press briefing that a final decision will be announced next Tuesday.

“We are escalating our fight to defend DACA and confront white supremacy,” Cristina Jimenez, Executive Director of United We Dream said in a press release in response to the circulating rumors. “But no matter what their decision, our priority will always be to fight for justice and dignity for all immigrant youth and their families.” 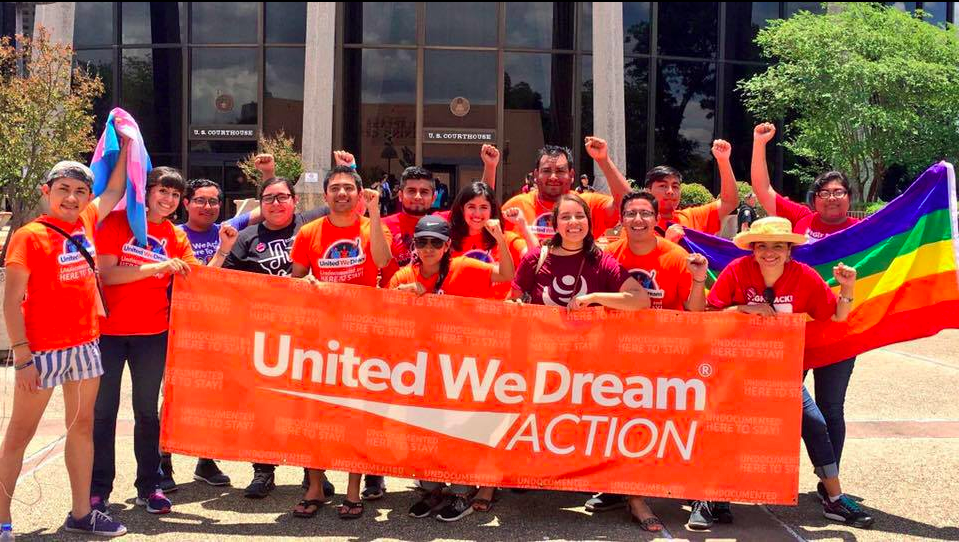 Photo via United We Dream

DACA, which was implemented by the Obama administration in 2012, allows undocumented youth to obtain work permits and be protected from deportation if they submit their information to the government, pass a background check and maintain a clean record. Among the DACA recipients who would be affected if Trump pulls the plug on the program are lesbian, gay, bisexual, queer and transgender immigrants who are especially marginalized in the U.S. According to a 2013 study by the Williams Institute, there are an estimated 267,000 LGBT-identified undocumented immigrants. The Institute also estimates that there are 75,000 LGBT-identified undocumented immigrants who qualify for DACA while there are over 36,000 who have participated in DACA and 24,000 who renewed in the program as of March 2016.

Monserat Padilla, a trans woman living in Seattle and a DACA recipient, was brought to the U.S. when she was two years old from Guadalajara, Jalisco, Mexico and grew up in Los Angeles. She says DACA was the only sense of safety she had if she ever were to encounter Immigration, Customs and Enforcement (ICE) agents or border patrol officers. If DACA were to end, she says, many undocumented immigrants will have to stay quiet about being undocumented and be cautious of who they tell. “We could go back to the days where the fear took control of our lives as opposed to us taking control of our lives,” Padilla says.

Padilla is a member of Organización Latina de Trans en Texas (OLTT), an organization that advocates and provides social services for the trans community, especially trans Latinas in Texas. The Houston-based organization helps the trans community with getting hormone therapy, legally changing their name, and accessing housing. They also work to address the struggles undocumented trans people face such as potentially being caught by ICE and being put in detention.

“Our LGBTQ undocumented community is not present in immigrant rights movements and not present in LGBTQ movements,” Padilla explains. “In a way we’ve had to build our own platform, our own movements, alongside these robust movements to uphold our particular community so we don’t fall through the cracks.”

Sheridan Aguirre, a field communications manager for United We Dream, the largest immigrant youth-led organization in the nation, says DACA has been at risk ever since Trump came into the White House but now it’s in even greater danger. In June, Texas Attorney General Ken Paxton and nine other Republican attorney generals plus the governor of Idaho urged the Trump administration to end DACA by September 5. If not, they said, they would file a lawsuit and challenge DACA in a federal court. 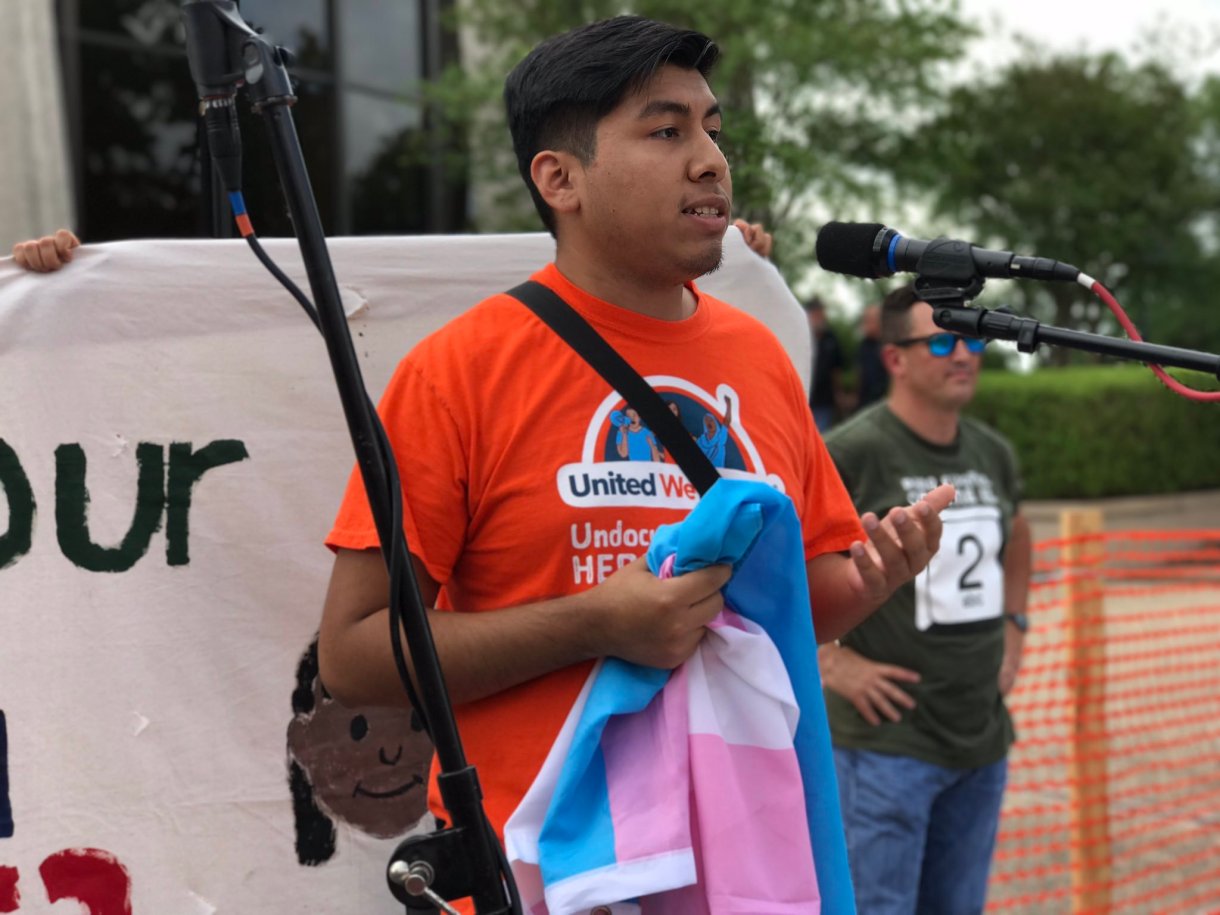 Sheridan Aguirre speaking at an action.

Aguirre, who uses they/them pronouns, has been a DACA recipient for the last five years. This has allowed them to get a driver’s license, buy a car and be able to work to sustain themself, their partner and their family. Aguirre is an example of the economic growth DACA recipients have contributed to the U.S. According to the Center for American Progress, the U.S. economy could lose about $460 billion over the next decade if DACA were to be eliminated. But the benefits of DACA are far greater for individuals and their families.

“It’s really given me a huge sense of normalcy because growing up, I had to hide the fact that I was undocumented,” Aguirre said. “I could never do the things that other people around me were doing, like getting part-time jobs, getting internships, being able to drive, so it’s changed a lot for my immediate family. And I know for them, it’s been a beacon of hope that our time here is being recognized and that we’re able to really say this is our home, that we’re able to really thrive in the places we’ve settled down.”

As a queer man, Aguirre says DACA not only helps with their physical safety, but also their mental and emotional well-being. They say it allows undocumented immigrants to have hope and feel powerful as their whole selves.

“I think for me and for many others, DACA has also been a way to affirm our authentic selves,” Aguirre says. “It’s allowed us to feel safe and coming out as immigrants who are undocumented and even further for me and for others in the queer and trans community, has allowed us to also embrace all facets of our identity and our selves.”

As the fate of DACA is uncertain, Padilla and Aguirre are both helping immigrant communities prepare for the future. Padilla says OLTT is continuing to defend DACA and making sure undocumented immigrants know their rights, including a potential phase out of DACA. “Preparing for the worst and preparing for the best, that’s always been our organizing strategy,” Padilla says. Immigrant Legal Resource Center created an information sheet to inform DACA recipients of what they need to know if the program ends. 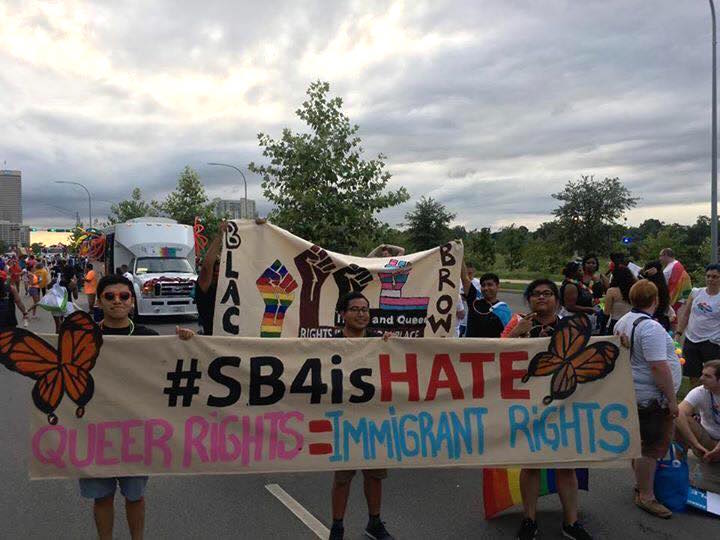 At Houston Pride. Photo via United We Dream

Padilla believes the fear of “not knowing” creates more harm for the undocumented community, saying it’s damaging to their humanity. Padilla says the stress and fear can deeply impact LGBT undocumented folks in particular which can lead to developing risky behaviors that can be detrimental to their health. “We’re in defense mode and many of the times we forget to address many of our needs,” Padilla says. She makes it a point to prioritize the health needs of her community by ensuring they have access to vital services.

What can be done if DACA ends? The fight isn’t over, according to Aguirre. Aguirre says the key is to push for pro-immigrant local resolutions and policies and urging local elected officials to be vocal about supporting immigrants. In response to the 10 Republican attorney generals and Idaho governor urging Trump to end DACA, 20 Democratic attorney generals voiced their support of DACA. In addition, 42 Senators and 155 House Representatives urged Trump to protect DACA. Aguirre says it’s even more important for local elected officials to show their support of immigrants.

“We really want to make sure that local elected officials do all that they can to ensure our safety, to decriminalize our bodies and our existence and additionally calling on educators and places of worship to do something similar — to be vocal about their support, to make their support also visible through public statements, through art,” Aguirre says.

There’s no doubt the attacks against DACA are racialized and are coming from white supremacists, Padilla and Aguirre say. Aguirre says anti-immigrant policies target undocumented folks because the color of people’s skin, because the way people look and because of where they were born.

“The same people who are attacking me are the same people who are attacking other folks in our communities — black folks, trans folks, and so it’s important, especially in these times, for us to be able to listen to one another, to create dialogue and to show up in any way we can — in person, online and even with our loved ones to be able to talk about what’s going on in this climate and be real about the need for us to be in community and to stand up for one another.”

No matter what the outcome of Trump’s decision on DACA, the immigrant community will continue to keep fighting back, not only for the rights of immigrant youth but all immigrants of all backgrounds and ages. All across the country, immigrants and allies are planing for resistance through civil disobedience, fasting, protests and vigils. They’re definitely #heretostay.

“We’ll continue resisting because as LGBTQ folks, as immigrant folks, we have been resisting,” Padilla says, “since the day we have decided to live authentically and unafraid and unapologetically.”

Update, Sept. 4, 2017: Trump has decided to end DACA and will give Congress 6 months to find a potential replacement for the program, officials told Politico.  Nothing is official just yet, but a White House announcement is planned for tomorrow.