Today’s most special top story comes from the illustrious Daily Telegraph and is regarding a “lesbian foster couple” who allegedly dressed their six-year-old foster child in girls clothing and then posted the “humiliating pictures” on their facebook page, thereby destroying the boy’s understanding of the gender binary and causing 6-7 earthquakes.

This is one of those ridiculous/sad stories I generally avoid, but this morning we were short on content and I had a doctor’s appointment so I figured I’d write it up quickly and be out the door.

Not so fast, apparently! This story is a little bit fucked on a few levels and I was unable to finish it pre-doctor’s-appointment but I was also unable to resist digging into it to assess the precise levels of fuckeduppery upon returning home. 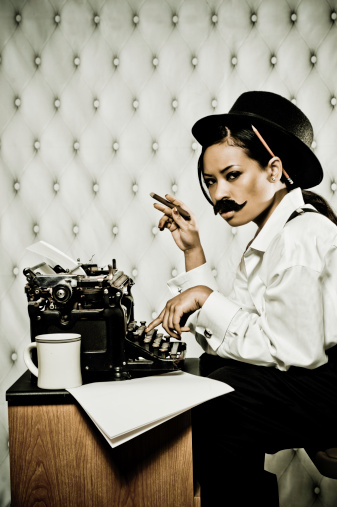 For starters, this story has no tangible impact on any of the involved parties and is logistically irrelevant. Why? Because this whole shebang (allegedly) — which barely makes sense/seems real to begin with — happened in 2009. The six-year-old boy, named “Campbell” in court records, was taken away from the The Monster Lesban Parents and placed with new caretakers on May 1, 2009.

His New Parents have been an excellent match and are currently in the process of adopting Campbell.  “Campbell has blossomed in their care and this is very evident in his happy, expressive and confident presentation.” Case closed, right?

Well — yes. In the courts, the case is closed. Everyone involved has moved on to different things, and the only reason this situation is attracting attention at all is because Campbell’s Birth Parents recently applied to regain custody of their son and, in doing so, dredged up all the old records of their past court visits. Apparently The Daily Telegraph found something in those documents about The Lesbian Parents that I myself could not find from reading every word, which is the aforementioned tale about the gender-bending Facebook picture. 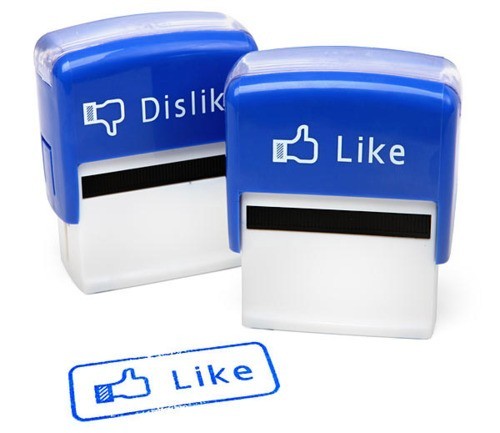 But first, the verified facts! Campbell and his seven siblings were put in foster care in 2006, and Campbell and his 12-year-old sister, Abby, were placed together. The children had been living in an abusive home with The Birth Parents. Actually, they’d been living in the most horrifying home to ever house children in the history of the housing. From court documents:

The environment of abuse [living with their mother] was characterised by an excessively rigid disciplinary regime, involving shouting, yelling and unsparing physical punishment including face-slapping, kicking, biting and spanking on the bare bottom; callous and cruel force-feeding; long and uncompromising periods of ‘time-out’; and episodes of public humiliation, including sending children to school in pyjamas. There is evidence of food-hoarding, forcing children to eat vomit, and hair-pulling.”

So, after being removed from The Birth Parents, Campbell and Abby were initially placed with The Lesbian Parents (although, as the news delightfully reveals, “one of the women was preparing for a sex change to become a man at the time,” so is that really a same-sex couple? Because I feel like it isn’t). “The placement did not work out for Abby,” says The Herald-Sun. Court documents reveal that Abby was removed for her own behavior problems (unsurprising considering the horrific abuse she suffered all her life), unrelated to the couple’s care-taking skills or gender theories.

In the aforementioned court papers regarding Campbell’s Mom’s custody case, Campbell’s prior custody situations are described. The detail about Campbell’s removal fromThe Lesbian Parents is limited to:

“Overall, [names not published] impressed as a young couple who have had quite a turbulent period through the course of Campbell’s placement. This period has included a separation and reconciliation, ongoing difficulties with Abby resulting in a subsequent breakdown of her placement, a large wedding and honeymoon, fertility treatment and preparation for gender transformation for [name not published], as well as a current house move. …”

Ms Lindfield recommended that Campbell not be placed with this couple on a long-term basis.

“It should also be noted that throughout the 2 years in [name not published] care Campbell was somewhat emotionally deprived, was not managed consistently, and was confused, however he was not abused.”

So, clearly The Lesbian Parents were shitty parents and it’s good Campbell got out of that home. Needless to say, if the story ended here we’d still have five hundred reasons to be furious, namely in that the singling out and highlighting the sexuality of these caretakers seems to be an attempt to question same-sex couple’s fitness to raise children in general. Meanwhile, Campbell’s Heterosexual Birth Mom made her children eat Weetabix for breakfast, lunch and dinner for three weeks straight and often bashed their heads against the wall for no reason. Just saying.

SkyNews says,“The boy’s story was revealed in last month’s Children’s Law news compiled by the NSW Children’s Court.” I read it and I’ve still got no clue where The Facebook Story came from. Even if it’s true, it doesn’t seem to have played a role in Campbell’s removal from the Lesbian Parents’ home.

Obviously, the first source of this information comes from bastion of journalistic integrity, The Daily Telegraph:

So, Janet Fife-Yeomans, who’s that? According to Penguin Books Australia:

Janet Fife-Yeomans is a bestselling author and award-winning journalist who has worked in newspapers and television in Australia and her native England. She is a leading writer on crime and legal issues and followed the incredible case of Daryl Suckling to its conclusion while working for The Australian newspaper. She became a deputy editor at The Australian and subsequently joined executive management at News Limited. She is now chief reporter at The Daily Telegraph in Sydney.

So maybe Janet Fife-Yeomans has some solid sources somewhere that we’re not privy to. For example, with no mention of where these comments were made, Janet reports the following in her “story”:

The boy and his 12-year-old sister have since been moved but former Children’s Court magistrate Barbara Holborow yesterday called for a full inquiry into the decision to put them there. “Oh my God, what are we doing?” Ms Holborow, who has fostered eight children, said.

Families Minister Pru Goward has demanded a full explanation from child welfare service Barnardos, which had recruited the couple.

“I am seeking advice from Barnardos to confirm that care arrangements were appropriate and the well being of the children was paramount,” Ms Goward said yesterday.

This story has since been repeated, syndicated, and commented upon by numerous websites, both LGBT and mainstream sites like The Daily Mail and The Herald-Sun. 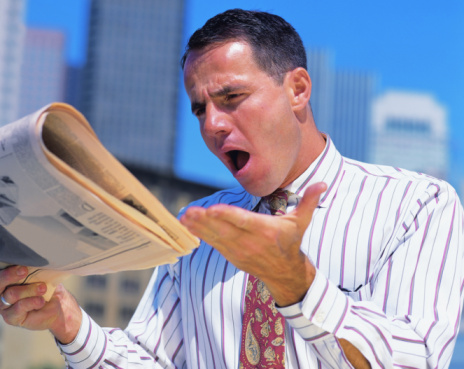 Today, Janet Fife-Yeomans threw another log into the fire with an editorial in The Daily Telegraph. It opens:

THERE is nothing wrong with same sex couples, gay or lesbian, having children, raising children or fostering children.

Where it goes wrong is when they politicise the children or use them to make gender statements.

This has to be the same rule for heterosexual parents or foster parents as well. Children are not belongings.

It goes on to say:

The lesbian couple who dressed up the six-year-old boy they were fostering, photographed him and posted the pictures on their Facebook page were irresponsible and immature…

Yes, kids like to dress up but that is beside the point. He was six years old and a foster child who had a background that is one of the saddest you will ever hear. He deserved not only love but respect…

Whatever the couple wanted to achieve has backfired. By seemingly using this boy to make a gender statement, they have actually done their case more harm than good. People who might otherwise think it’s fine for same sex couples to have kids will look at this and be appalled.

A fantastic journalist at PerthNow says:

This gross example of child abuse is a wake-up call that everything about the gay movement isn’t acceptable.

At last we’re now at the part of the post where I discuss what I assume has been your number one feeling since the first paragraph — we’ve got no reason to assume Campbell was unwillingly put in women’s clothing by The Lesbian Parents or that he himself considered the photographs “humiliating.” Why is wearing girls’ clothing inherently humiliating, exactly? Kids play dress-up all the time. Even if I wasn’t about to launch into a diatribe re: gender roles, a boy wearing a costume in a photograph is not weird, let alone appalling or a “gender statement.” 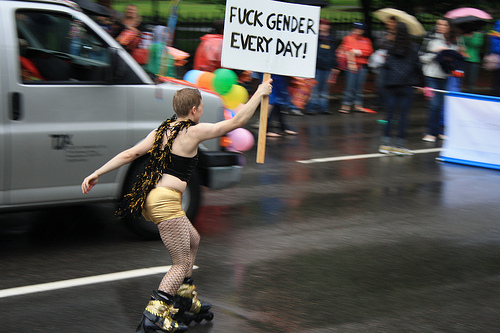 example of an actual gender statement

This year, Shiloh Panic (aka Tomboy Panic) levels have remained medium-high but Princess Boy Panic is basically on red alert. As you may or may not know, the phenomenon of boys donning dresses undermines the patriarchy and all the capitalist power structures upon which our government and culture is based so this is very scary for some people. 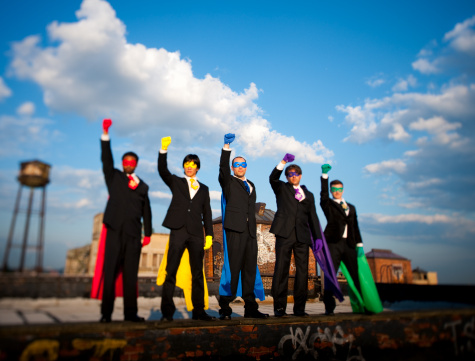 From the legendary princess boy book to the JCrew ad depicting a toenail-painting boy toRaising Rainbow to the viral blog post about a mother whose son dressed as Daphne for Halloween, this year has been particularly tumultuous because the parents/supervisors involved have dared to love and protect and defend their children instead of “fix” them. It’s no surprise that this story about The Lesbian Parents caught on, inspired vicious comments, or that Janet has such strong feelings about it.

The Lesbian Parents were irresponsible to take on a foster child at such a rocky and event-filled time of their life. But letting the kid wear what he wanted to wear? Possibly one of their smarter parenting moves.

Janet is right about one thing — Campbell “deserved not only love but respect.”  If only she could’ve brought herself to give it to him instead of writing this obnoxious article.