Her acclaimed novel, Wide Sargasso Sea, is a postcolonial reimagining of Charlotte Brontë’s Jane Eyre. Instead of focusing on the stubborn, studious, and white, Jane, it turns instead to Mr. Rochester’s first wife, a mere inconvenience and source of gothic horror in the original. By examining England’s relationship to Jamaica, men’s relationship to women, and women, specifically women of color’s, relationship to sanity, Rhys calls into question the dangerous simplicity of the original text.

But 28 years before Wide Sargasso Sea, and 91 years after Jane Eyre, another novel was published about a young girl, a brooding man, and a mad woman ruining their tale of romance. This book, Daphne du Maurier’s Rebecca, would eventually be turned into Alfred Hitchcock’s only film to win the Academy Award for Best Picture. 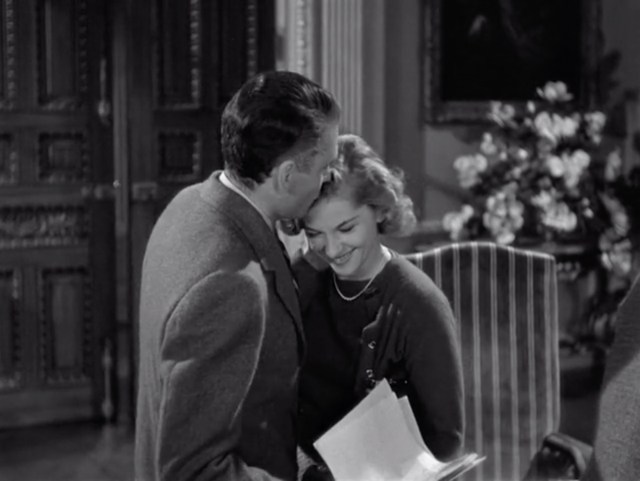 Love as God intended: One man and one woman… who look like father and daughter

I love Rebecca, the book and the movie. I love the passive protagonist. I love how insecure and pathetic she can be. I love her love, her innocent, passionate, stupid love. I love how astute the book is about class, about not belonging, and wanting to belong. I love Daphne du Maurier’s prose and I love Alfred Hitchcock’s cinema.

If you’ve never read the book or seen the movie do that first without influence. But then I must implore you, I really must insist, you revisit the movie from Mrs. Danvers’ perspective. There is not a rivaled piece of literature to do this work for you, but it’s all there, and it deserves, she deserves reevaluation.

Danvers is Rebecca‘s mad woman in the attic, or, rather, mad woman in the perfectly preserved east wing of the Manderley estate. She is Maxime de Winter’s head housekeeper and the antagonist of the film. She immediately dislikes the unnamed protagonist, the second Mrs. de Winter, insisting that she does not belong (she doesn’t) and is nothing like Maxime’s first wife, Rebecca (she isn’t).

The main problem, the unspoken source for all this animosity, is that Mrs. Danvers is very gay and very much in love with Rebecca. Even with Rebecca dead, she remains true. Her love has not waned. 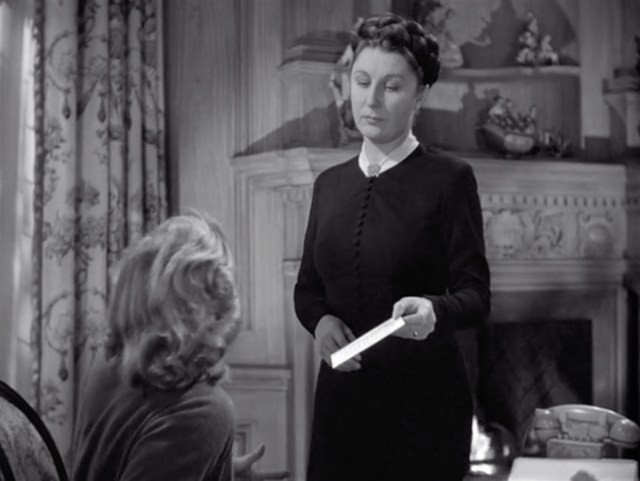 We first see Mrs. Danvers when the second Mrs. de Winter arrives at Manderley. Second and Maxime met at Monte Carlo, he a mysterious and wealthy widower, and she, a plain and unassuming companion to a boisterous rich lady. It was less a whirlwind romance and more an anxious courtship, Second second-guessing every word and action, Maxime alternating between condescending charm and fits of anger. But they married nonetheless and have now arrived at Manderley, his place of birth, Rebecca’s place of death.

It’s raining, so Second enters the grand hall looking even more disheveled than usual. The two dozen servants are standing at attention waiting to greet her. The camera pushes in and Mrs. Danvers walks into frame. She’s wearing a long black dress and a white collar with a jewel in the middle. Her hair is braided tightly against her head. She has a mole on the right side of her chin. Her eyebrows are perfectly shaped crescents

Danvers is not known as a sexy character. And I’m not going to try to convince you otherwise. But I will say that for me, personally, unstable, highly competent ice queen isn’t something I’m not attracted to. And beyond hotness, the way she toys with Second is both clever and consistently humorous… if you’re on her side. 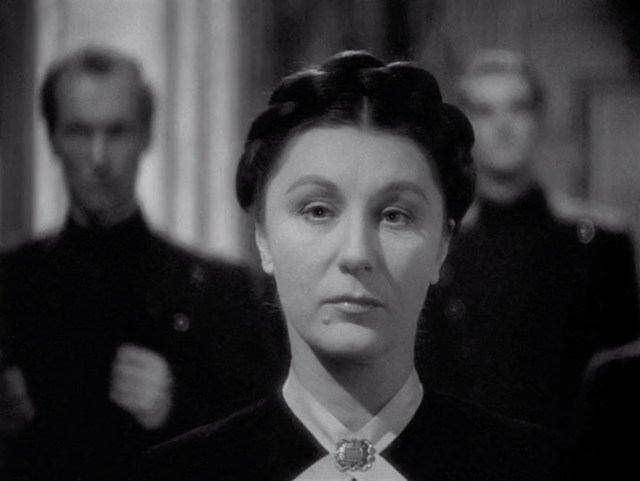 I’m saying she has a quality!

The twist in Rebecca is that Maxime didn’t love his first wife. He hated her. His preoccupation with her death is not due to residual feelings, like the insecure Second imagines, but because he was the cause. He murdered her and he fears retribution. The movie clarifies that he killed her by accident, largely because Rebecca has a “happy ending” and the Hayes Code required all actual murderers to be punished. But you’d have to be stupid (or in love) to believe Maxime’s tale of a scuffle that ends in a trip, a bump on the head, and a body tied to the hull of a ship.

The argument that ended in Rebecca’s death supposedly began with her telling Maxime she was pregnant with someone else’s baby. Supposedly she mocked him. Supposedly on their honeymoon she told Maxime horrifying things about her past, “things I’ll never tell a living soul,” he says. Supposedly, Rebecca was “incapable of love or tenderness or decency.” Supposedly.

When asked if Rebecca and Jack were lovers, Mrs. Danvers replies, “She had a right to amuse herself didn’t she? Love was a game to her. Only a game. It made her laugh I tell you. She used to sit in her bed and rock with laughter at the lot of you.”

The text of the film confirms that Rebecca was not the monster Maxime describes. Even his mention of her black hair feels coded, an attempt to other, just like in Jane Eyre. But I’d recommend going one step further. While it’s widely acknowledged that Mrs. Danvers is in love with Rebecca, this lesbian subtext recognized by even the straightest critics, it’s rarely suggested that Rebecca was in love with Danvers too. But she was. That’s what I’m suggesting. 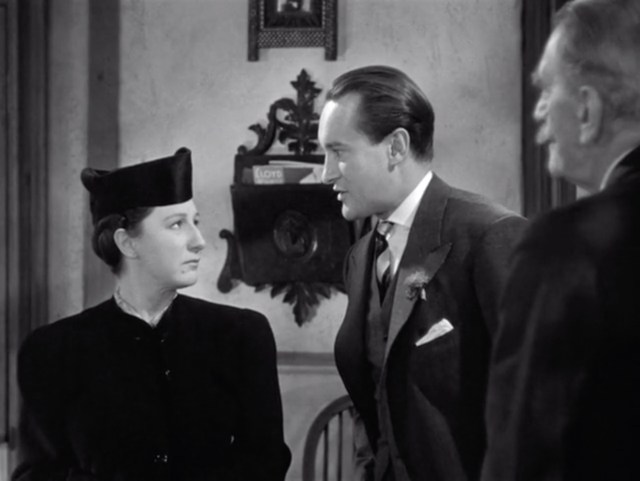 Mrs. Danvers lost the love of her life, her partner, less than a year prior to our story. And then this new girl arrives, using her name, living in their home. Any madness she shows feels justified.

The most famous scene in the film, the gayest scene in the film, finds Danvers and Second in Rebecca’s old room, in the east wing, by the sea. Second goes into the room out of desperate curiosity. When Danvers appears, a shadow behind a silk curtain, Second says she just came in to close the window. Danvers calls out her lie.

“You’ve always wanted to see this room, Madame,” Danvers says. “Why didn’t you ask me to show it to you? I was ready to show it every day.” She opens the big curtain and light flows in, illuminating everything. The room is perfectly preserved.

She begins her tour, first leading Second to Rebecca’s clothes. She places one of the furs against her face and then Second’s face. Then she moves to Rebecca’s underwear. It was made especially for her by nuns and she touches it delicately. She explains how she’d brush Rebecca’s hair, help her take a bath, and then put her to bed. Danvers places her hand through Rebecca’s nighty. It’s sensual. It’s sad. “Do you think the dead come back and watch the living?” she asks, hopefully. 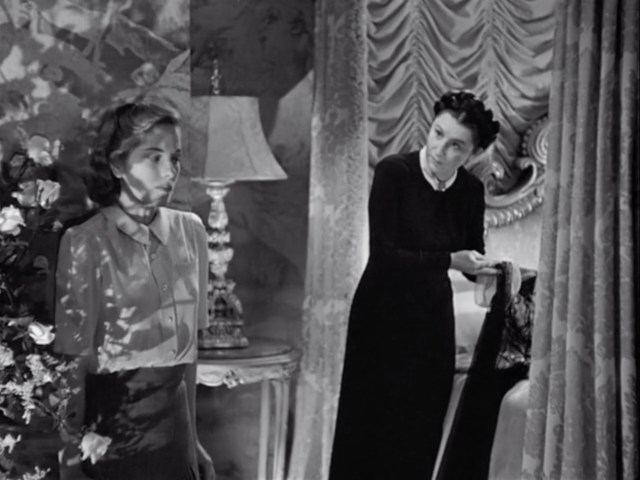 Pictured: The nice sales person helping me shop for my first bra

Alfred Hitchcock was an abusive man, a creep behind the scenes and through his lens. But the reason so many of his films remain queer classics is because of the humanity he bestowed upon these characters. There were plenty of coded gay villains in early Hollywood, but Hitchcock was unique in how he portrayed them.

Peter Lorre’s sniveling Cairo in John Huston’s The Maltese Falcon is obviously intended to be gay, but he exists almost solely as a foil to Bogart’s masculine Samuel Spade. He’s not just bad morally, he’s bad narratively. He holds no power, has no arc, is more of an amusement and a plot point rather than a person. Hitchcock’s villains had power. And their queerness was present on screen.

There is love and sexuality in Rebecca. We see fully developed desire in Mrs. Danvers. She’s not a joke. She’s complicated, damaged, maybe evil, definitely tragic. A human being. Cairo is gay because he’s effeminate and weak. Danvers is gay because she’s madly in love with another woman.

It’s just a shame she isn’t centered in the narrative like so many of Hitchcock’s queer men. 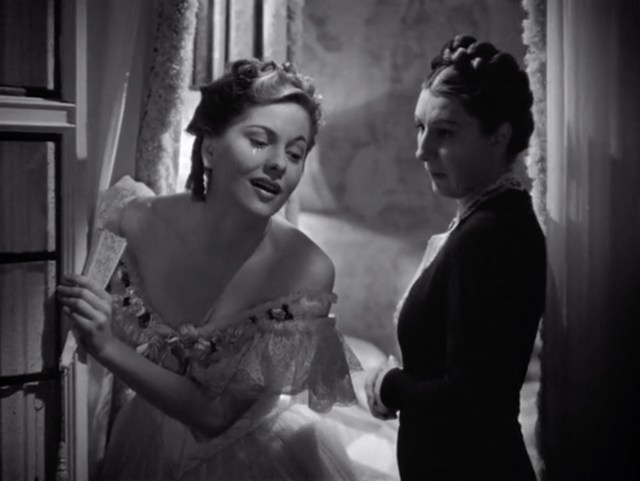 Rebecca ends, like Jane Eyre, with the mad woman burning down the estate and taking herself with it. The acceptable couple is free to move on, free to live out their lives in peace from difference. A happy ending.

A remake of Rebecca is currently in production. It will be directed by Ben Wheatley, another straight man artistically consumed with violence. It will star Armie Hammer as Maxime, Lily James as the second Mrs. de Winter, and Kristin Scott Thomas as Mrs. Danvers. It’s sure to be a handsome adaptation, if somewhat unremarkable.