On a beautiful sun-dappled afternoon in an outdoor amphitheater in Northern California, I lost God. It was the early 2000s, I was attending my first Jewish summer camp, and I had an existential panic attack while attempting to count the tens of thousands of pine needles which cushioned the floor of our camp synagogue.

I could hear my nine or ten-year-old brain whirring against our communal silent prayer:

In retrospect, this impressively philosophical breakdown may have been prompted by my having imbibed dining-hall coffee for the very first time, but even after the caffeine wore off, the sentiment stood. I didn’t know if I believed in God. I was a bad Jew.

After the service, the counselors led us back to our cabins, and most of us excitedly started to prep for Shabbat. This was the time to wear something that wasn’t all-purpose or tie-dye. We were ushering in the Sabbath bride, which meant all white, mostly dresses for the girls, and white button-downs for the boys. Unless you were one of those bad boys that every girl felt pressured to have a very public crush on — then there was the addition of some sort of “leather” bracelet, or puka shell necklace.

I, after my possibly heretical revelation, did not feel clean enough to wear white. I was ready to pack my bags right then and there, but my favorite counselor persuaded me out of my bad mood with a smile and an offer to take a picture with me, on my Kodak disposable, once I was dressed.

When she complimented my pink-trimmed, white cotton dress, I almost forgot that I hated training bras and dresses, and that I didn’t have a crush on any of the boys, and that I didn’t feel Jewish enough to wear this delicate white cotton. We took a picture, and I was at her side for the rest of the night, staying under white and blue tallit when the counselors symbolically sheltered us during my favorite sung prayer, the Hashkiveinu. In fact, I stuck by her side for the remainder of the camp session.

I returned to my Reform Jewish family with new layers of guilt: one for knowing that every Friday night Shabbat dinner and Saturday morning service, I wouldn’t be praying to their God, and one layer that I hadn’t quite figured out yet.

That second, nebulous layer of guilt remained unresolved until I was 14, when, with a rush of snot and tears, I told my mother that I liked girls, too. The guilt dissipated, the snot was caught in a Kleenex, and somehow my life became so much better, even if my mother’s acceptance of my declaration took a good few years to fully develop.

A few months later, I decided the time was right to come out to my younger sister, choosing an obtusely symbolic location for my announcement: the patio of our synagogue, right after a Saturday morning b’nai mitzvah. She, 12 at the time, said she would have to think about it, but she knew this sort of thing happened in books. I clutched my paper plate stacked with cookies from the oneg, shook the crumbs off my pants, and knew somehow we would be OK. 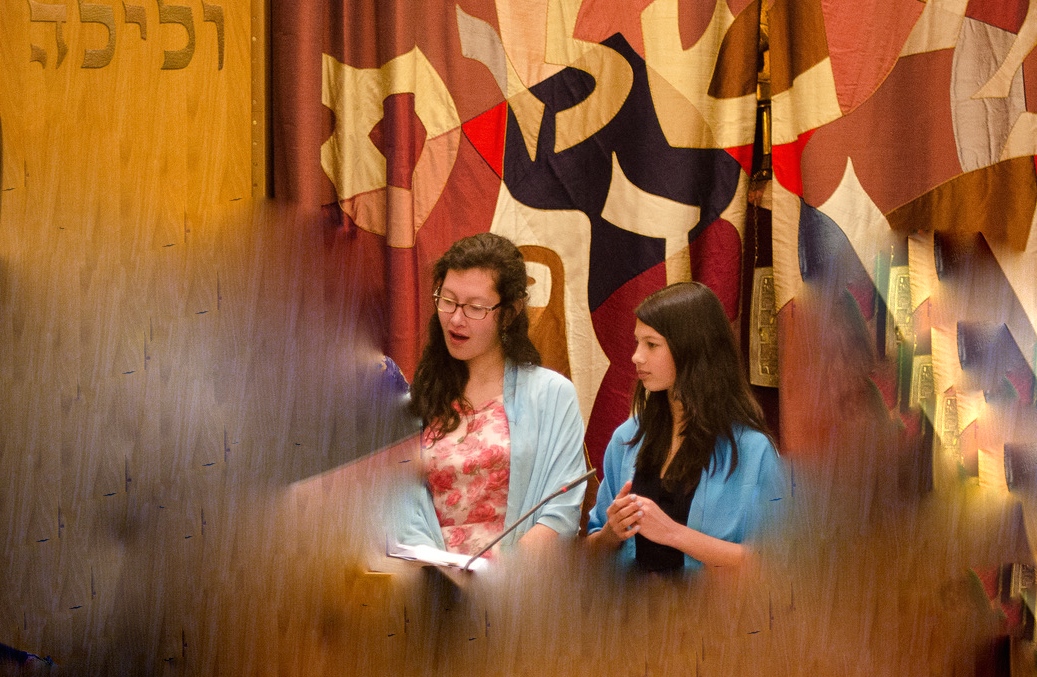 While my queer identity became more and more defined, and my confidence along with it, my Jewish identity was still plagued by anxiety. I was a bat-mitzvahed liar who couldn’t stand silent prayer, who purposely wore jeans to synagogue, and got out of attending services with any possible excuse. I had my sustained doubts about God, but I was sure that if there was one, they wouldn’t accept me as a wavering believer, and a bisexual woman. One would have been enough.

So I retreated. I remained proud of my immigrant, Ashkenazi Jewish-on-both-sides heritage because I had to, especially in a majority Anglo Christian high school. Intergenerational trauma doesn’t let you go that easily — nor do grandmothers, who are surprisingly open to the idea of their granddaughter bringing home a girlfriend for Chanukah. That is, as long as she’s also Jewish.

But I only went to services when it was absolutely necessary, and during silent prayer I kept my mind as blank as I could — a sort of forceful, panicked meditation. My sky-blue tallit and yarmulke, which my parents and I had picked out together for my Bat Mitzvah, were carefully folded then stuffed into the furthest reaches of my closet, only to come out during my sister’s Bat Mitzvah.

When I was given the choice of dropping Tuesday Hebrew school post-sophomore year of high school, I chose to drop it, but claimed reluctance. It was an important facet of my life, but I was in high school now, and really needed to focus on those APs! Slowly, that became the reigning excuse, and by my senior year of high school I only went to services for high holidays, or when my dad was playing his guitar for the Bar or Bat Mitzvah of the hour. And that was that.

I knew it hurt my mother. When deciding which colleges to apply to, she expressed her fear that I might move somewhere without a strong Jewish community. The fear was baseless, as I was applying in Los Angeles, Berkeley, Chicago, and New York, but I heard the underlying anxiety. She knew that the further I traveled, the easier it would be for me to put off my physical ties to Judaism altogether. Never mind that there would be a Hillel (a Jewish Campus Life foundation present on most college campuses) and a JCC (Jewish Community Center) wherever I was going. I think she suspected my trajectory was as far from their doors as was polite without being called anti-Semitic.

On a cold, windy, night in Manhattan, somewhere off West 30th, at Congregation Beit Simchat Torah, I found something less monolithic than God. I was attending Shabbat services voluntarily for the first time in eight years, across the country from my mother. I was not wearing a dress; I was not freaking out about pine needles. I was out, sitting next to a new, also out, friend from my graduate program, who had suggested we both get back to our roots with something unthinkable: an LGBT-centric congregation.

As I peered over the second floor balcony, trying to be as discrete as possible, I zoomed in on one item at the bima: the rabbi’s unwieldy, huge, rainbow tallit.

This prayer shawl, which kept threatening to slip off the rabbi’s shoulders, was the most beautiful garment I had ever seen. Like any other tallit, it sheltered, and it reminded its wearer to count their blessings. It had the same number of tzitzit as any other. And the beged was striped with precision. But its colors communicated something I had never really thought possible.

I stared at the tallit all night, in between glances down at the congregation’s siddur, which, aside from holding the usual combinations of prayers in Hebrew, transliterated Hebrew, and English translation, included passages on the importance of the 1980s HIV/AIDS epidemic to Judaism, and the impossibility of losing hope as LGBTQ+ people.

For the first time since my Bat Mitzvah, I wanted to be under a tallit. I wanted to kiss its corners, wrap it around me, and know that, if not God, specifically, something was watching in approval, and sheltering me from the oncoming storm. The blazer I had on didn’t feel like it was weighty enough — I wanted to wear my own history again, this time supported not only by my Jewish ancestors, but by my queer ancestors. I wanted to reclaim the heritage I had preemptively put aside because I thought it would reject me, if it knew the real me.

I wanted, and knew I had the very real possibility, to feel stitched together. Whole.

A year or so ago, I found out that Rabbi Elliot Kukla and Ari Lev Fornari, of the incredible site TransTorah, created a blessing for putting on a binder — one of the many blessings that the tzitzit of the tallit remind us to take into our hearts.

As stated by TransTorah, it is:

“for the act of chest binding, for FTM transgender and/or genderqueer people, and anyone else who chooses to flatten the appearance of their chest. It is intended to be used as a way to sanctify the often painful act of binding. It can be recited daily and modified to meet your particular gender and Jewish needs.

If I had known of this blessing in 2007, when it was first published, things might have been different. If I’d known that my home congregation would someday include “member of the LGBT community” as a reflection of their population’s diversity in their website’s mission statement, something in me might have healed before further fracture. Who’s to say.

It might be obvious by now that I’m not a rabbi. I’m not, in any sense, pious. I still have dissenting opinions when it comes to discussing Israel/Palestine as “our homeland”— a conversation that gets me into trouble far more than my sexual orientation does. I don’t even belong to a congregation. I don’t know to whom, exactly, I pray.

But now, I do have one blessing that I’d like to write, even if it’s wildly unofficial, untranslated to the language of holiness, and only for me:

For the act of embracing one’s ability to feel protected. It is intended to be used for those of us who lost years thinking we weren’t worthy of a higher entity’s love. It can be recited anytime, and modified to meet your particular Jewish needs. It is suggested, but not mandated, to be recited alongside the donning of a rainbow yarmulke or tallit.

Shayna Maci Warner (she/hers) is a writer, filmmaker, and pizza wrangler from Northern California, whose work has been featured by GLAAD, the Advocate, teenVogue, and Bi+ Women's Quarterly. You can find her in NYU's Cinema Studies graduate program, or yelling about the cis-hetero patriarchy on the podcast Charmed: A Spellcast.

Shayna has written 5 articles for us.