Thanks to the “special snowflake” narrative that suggests nonbinary identities are a recent and unprecedented “trend,” it’s easy to forget that non-binary identities are not a modern phenomena at all. Existing as long as gender itself many cultures around the world have openly accepted and integrated non-binary and other trans people into their social systems, providing understanding and normalised social roles for them to fill. Even though the majority of these cultures are located in the global South or Indigenous American cultures historical non-binary people can be found even in the binarist West, though for obvious reasons their stories are rarer and subjected to constant debate about their “real” gender identity. One of the best known, thanks in part to the recent brief and passionate social media fascination, is The Public Universal Friend – a radical Quaker preacher whose work influences progressive Christianity to this day.

Born to Orthodox Quakers in 1752 and declared female at birth, The Public Universal Friend was initially named Jemima Wilkinson by their parents and forced to live in that social role. After becoming disillusioned with the mainstream Quaker movement and suffering a near death experience The Friend underwent a religious revelation – rousing from their fever and explaining that Jemima Wilkinson was dead and a new, genderless spirit inhabited the body now, sent by God to preach his message on earth.

A devout child, The Friend had memorized large passages from both the bible and key Quaker texts by a young age and regularly debated their subject matter with the adults around them. Apparently an athletic child with a particular fondness for spirited horses, they were known for their skill on horseback. Some biographers labelled them as overly fond of nice clothing and prone to laziness prior to their death and rebirth, but this may be the sort of editorializing common to accounts of religious lives – there has to be a degree of sin and worldliness for them to overcome after their awakening. We also don’t know if they experienced dysphoria, or if they understood it as a misalignment with the gender they’d been assigned, before that moment as biographers, friends and family would have had reason to elide that lest it be used to delegitimize The Friend. Whether The Friend’s identity as a genderless being was entirely a religious state or born out of what we would now conceptualise as an internal non-binary identity is still a matter of debate among religious historians.

During their early twenties The Friend became disillusioned with mainstream Quakerdom. Despite it’s radical roots the Quaker community was going through a period of stagnation, focused instead on the appearance of respectability and maintaining it’s self image as “a people apart”. They began to attend meetings of the New Light Baptist church, and stopped attending meetings with the chapter of the Society of Friends that they’d grown up in. This, and their deviation from the “plain language” (designed to eliminate social distinctions and formality) required by the Quaker movement, led to them first being disciplined and then, when they didn’t repent, expelled from their childhood church in 1776. Three of their siblings were also expelled in the same year; their sister Prudence, for giving birth to an illegitimate child, and their brothers Stephen and Jeptha, for breaching the tenet of pacifism to train for military service. Something which must have cemented their decision to break with the Quaker’s in search of something better.

However, all was not well in their new religious movement either, and The Friend was quickly becoming disillusioned with the New Light Baptists as well. Then, only months after their expulsion from the Quaker movement, The Friend contracted the illness that would change everything. Accounts on what The Friend was actually suffering from vary, though the prevailing theory is Typhus. Hostile biographer’s accuse them of never having been sick in the first place, taking to their bed and claiming illness in order to pantomime a religious visitation that never took place. However, the doctor who was called in to treat The Friend that night went on record saying that Wilkinson had indeed been very ill, and that their claim to have died and been resurrected to do the Lord’s work was made directly after their fever broke. Dr. Man believed The Friend’s revelation to be a product of their fever having affected their brain, and claims that the friends and family surrounding them also believed that at first. If that was the case however it wasn’t long until The Friend won most of them around.

The Friend’s genderless identity was integral to their religious position and the claim that they were a spirit sent by God to inhabit the former Jemima Wilkinson’s body. According to parts of the New Testament the soul itself is genderless, and angels are interpreted similarly in many different Christian traditions. As a spiritual being who had never been human, and was merely inhabiting a now deceased human’s body, The Friend could be nothing but genderless as gender was a state that could only be applied to living humans. Wearing a mixture of traditionally male and female clothing, including black clerical robes and cravats, The Friend also spoke with a newly androgynous voice – alternately described as “clear and harmonious” and “unearthly and sepulchral” croaking, depending on the observer. The changes in their presentation, particularly their voice, indicates their gender identity was more than a theological position, though that theology was still integral to it regardless. Many of their female followers were to adopt similar means of androgynous dress, however for those women it was a statement of both spiritual allegiance and gender equality rather than a similarly non-binary identity, differentiating themselves from The Friend. 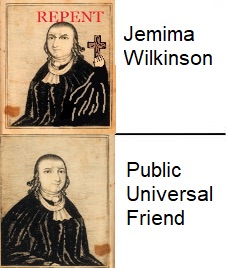 Travelling with their brother Stephen and sisters Patience, Deborah, Elizabeth and Marcy, all of whom were expelled from The Society of Friends as a result, The Friend began preaching throughout the New England area. Bringing a message of impending judgement and the need for repentance before the day came they held their meetings out in the open air, reciting lengthy excerpts of scripture entirely from memory. Their charismatic, revivalist style attracted large crowds, many of whom went on to become their followers. Styling themselves The Society of Universal Friends, many came from Quaker backgrounds and were expelled from their original meetings as a result of their joining up with The Friend.

Even though they’d broken with the mainstream Quaker movement the Society of Universal Friends retained significant Quaker influences, with many saying their theology was indistinguishable from orthodox Quaker teachings. Even the name, and the name of The Friend themselves, came from Quaker practices. A Public Friend was the Quaker term for a preacher who travelled from community to community spreading the word; by styling themselves The Public Universal Friend they were announcing a mission to minister to the entire of humanity in the Quaker style. The Society of Universal Friends meanwhile was a direct break with the idea of the Quakers as a “people apart”, announcing the hope that everyone would eventually see the light before judgement day.

Despite their preaching of the need for repentance The Friend believed in universal salvation, the idea that everyone would eventually enter the presence of God no matter how sinful or unrepentant in life. They also taught gender equality, promoting women, including unmarried women, into leadership positions, and preached against slavery, persuading slave owners who joined their movement to free their victims. Eventually settling in an area of upstate New York they titled New Jerusalem The Society of Universal Friends was to form a multi-racial residential (though still mostly white) community where women headed 20% of the households. The Friend, along with their companion who went by the name Sarah Friend and Sarah’s small child, lived in a large house at the centre of their community that did double duty as a home for the most vulnerable members of the community – at once time numbering seventeen women as their co-residents. Believing in the importance of hospitality and helping those in need the community would house and feed anyone who needed it, and allowed the other settlements in their area to use their water mill to grind their flour.

Not everything was smooth sailing, however. Several disillusioned former members of the Society attempted to have The Friend prosecuted for blasphemy; a series of events that involved The Friend escaping arrest through a display of skilled horsemanship, the women who lived with the friend violently driving out the men sent to arrest them in their home, and a posse of thirty people eventually breaking their door down in the middle of the night. This prosecution attempt was not to end well for The Friend’s enemies however as the judge not only found in favour of The Friend but allowed them to preach a sermon to those present in the courtroom.

Though marriage was permitted The Friend and their followers believed in the superiority of celibacy as a way of life, and the majority of unmarried converts stayed that way, as did those widowed after entry. A result of this was, despite the success and relatively high standard of living in the community, that The Society of Universal Friends didn’t much outlive its founder. Those who outlived The Friend, including the few young people raised within the Society, ended up dispersing between the most liberal protestant churches in the area – going on to influence The Unitarian and Universalists movements as they developed over the course of the century.