I was surprised by how unhelpful googling “vegan breakfast sandwich” was; most of what I found was either way too involved, more of a lazy Sunday brunch than a quick weekday meal, or way too health food oriented. Alfalfa sprouts are great, but honestly they’re not going to get me out of bed when I stayed up til 2 am in a weird tumblr rabbithole. The requirements were that it be easy enough to make regularly on weekdays, and also satisfying enough to keep me full for several hours. I work from home, so mine didn’t need to be portable, although that might be something you’re interested in. When I finally achieved my goal, it was glorious and totally worth it. You too can live this particular dream; let’s talk about how you can customize your own Breakfast Sandwich Experience™ by each component, even if you’re not a vegan.

Duh, it’s a sandwich. I went with English muffins because they seemed like a good size, and also they’re easy to throw in the freezer and thaw as needed. There are a dizzying array of other options, though: sliced bread, bagels, croissants, tortillas, flatbread, pita, etc. I suggest something that can be toasted, so that you have something toothsome, but do whatever you need. I just threw mine in the toaster oven for five minutes or so, flipping them once until they were, as they say, golden brown.

Protein is what makes your sandwich filling enough that you aren’t already hungry again when you reach work. I went with tempeh that had been marinated to become bacon-y, using this recipe. I have also found this sriracha-soy sauce tofu to be a delightful addition to any sandwich, including but not limited to breakfast sandwiches. Other options include, of course, bacon, sausage patties, leftover taco meat or steak from the previous night, and/or any vegetarian versions of these. I even made a breakfast sandwich with black beans this week, and while it wasn’t the most structurally sound, it was delicious. I’m dying to make one with soy chorizo, king of fake meats. The important thing is that you’re cooking or reheating this meat as your carbohydrate component toasts (which is the only drawback to the tofu, really, as it’s better baked than cooked in a pan and I only have one toaster oven). I cook my tempeh in a pan, turning over with a fork whenever the side it’s on has browned. 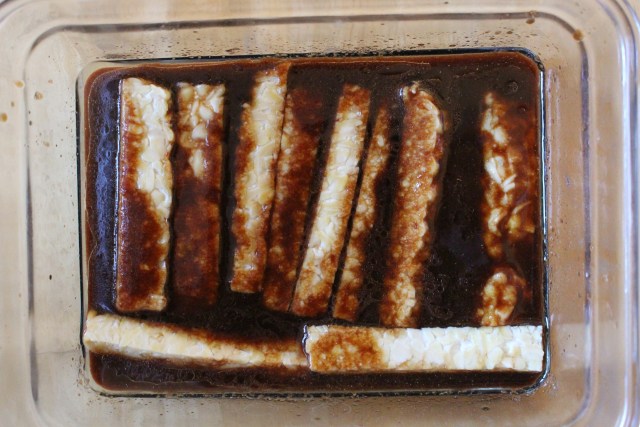 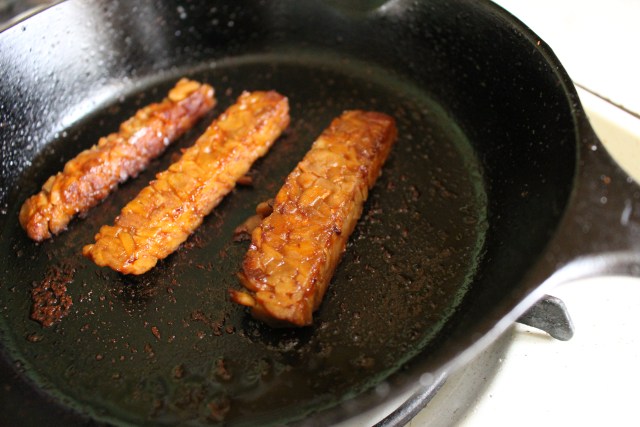 This, I would argue, is the least important part of a breakfast sandwich and is okay to skip, and I’m not just saying that because eggs aren’t vegan. My humble opinion is that if you eat a breakfast sandwich and the part you remember afterwards is the egg, it’s a bad breakfast sandwich; the egg also doesn’t add allll that much nutritionally or in terms of keeping you full. But maybe you’re a purist, whatever. In my breakfast sandwich trials, I used this vegan egg substitute recipe and was actually very impressed by it: it cooks up well, tastes fairly egglike, can be made once and lasts all week, and is generally a pretty solid breakfast sandwich component. My lack of enthusiasm for the egg portion of the sandwich comes not from any failures in this recipe, but from my more fundamental lack of enthusiasm for eggs. If you are a person who eats real eggs, it’s your call whether you want fried or scrambled (even though the correct choice is OBVIOUSLY fried). You may also be interested in this tutorial on bodega-style eggs from Food 52.

Me personally, I just cooked my little vegan egg McMuffin patty in the same pan as my tempeh for a few minutes on each side, flipping over halfway through. If you’re keeping track of the breakfast sandwich timeline, my English muffin is still toasting. (I don’t know what to tell you, my toaster oven works kind of slowly.) 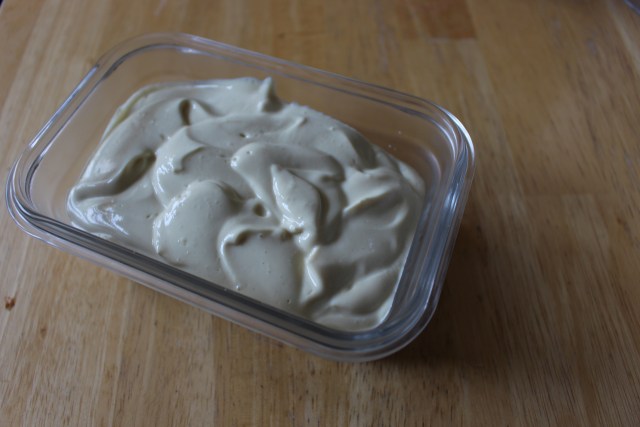 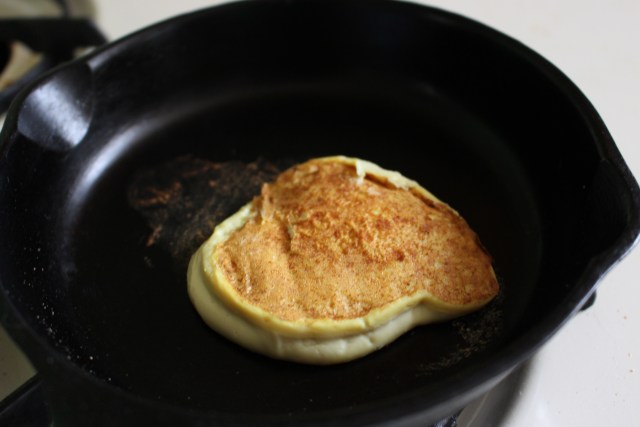 This is my FAVORITE part of a breakfast sandwich because it’s what takes the meal from being a thing that keeps you from starving to a spiritual experience. You have so many options here! What a time to be alive. Cheese is an obvious choice, and a good one, but let’s not forget avocados either! Also, duh, they’re not mutually exclusive. In some breakfast sandwich applications, probably those without egg, you may even find mayo to be a good fit. If your sandwich is housed within a bagel, cream cheese is of course on the table, figuratively if not literally.

Me personally, I’m not wild about storebought vegan cheeses, although if you like them then by all means, go out and grab some Daiya. I made a spreadable version of this vegan “Mexican” cheese, a cashew-based recipe that’s basically a Tex-mex flavored savory nut butter. It’s great, I’d recommend it (I’ve used it in layered taco dip before with great success), and also it has the bonus of nuts providing more protein and fat to keep me fuller. I also put avocado on there, sort of mashing it into the English muffin with a fork, because I deserve good things in life. These go on as soon as the English muffin is done toasting. 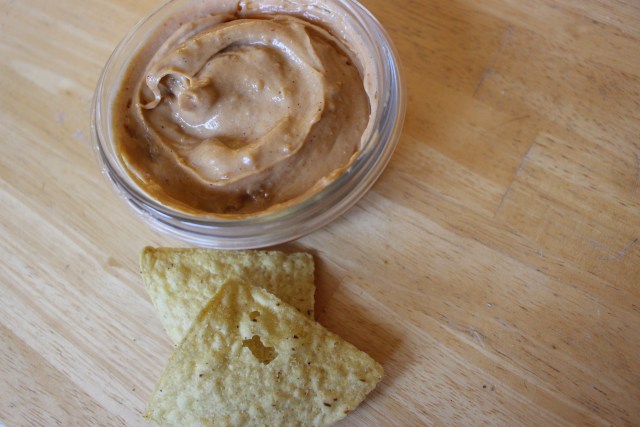 The tortilla chips are there for scale but also this dip is delicious with chips.

Although veggies don’t always get to be the heroes of the meals they’re in, I feel like the right veggies can really shine in a breakfast sandwich application. The thing to think about, I think, is texture. Tomatoes are always great, but can also sometimes make things mushy because they contain so much moisture (although they can be laid on a paper towel or a napkin for a few seconds to dry out a little). Cucumbers are great if you want to add some crunch. Greens are, if we’re being honest, a little boring in terms of flavor but great nutritionally. Depending on your time constraints and level of investment in the breakfast sandwich process, slightly more intermediate-level veggies could be used, like sauteed onions or peppers for a sort of fajita breakfast sandwich, or pickled veggies for a banh-mi-esque one. For no real reason I can explain, I feel like cucumbers and sliced bell peppers go well on bagels. Personally, I mostly went with tomatoes, because I like them. In the summer when there are fresh heirloom tomatoes, I’m sure this will be a really transcendent situation. 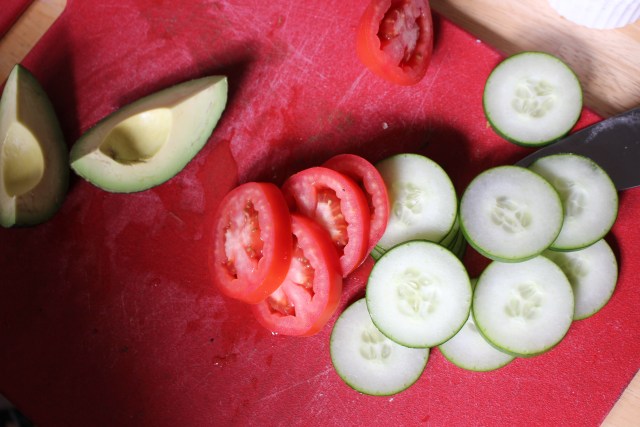 And that’s it! In my hypothetical breakfast sandwich narrative, the muffin has been toasted and slathered with rich and/or cheesy things, and egg, protein and veggies have been lovingly layered on. Now you just need to choose any condiments you want — I usually go with salt, pepper, and either sriracha or Valentina — and you’re good to go. If you’re running late and have to head out to your car or to the bus, you can wrap this up in some tin foil or wax paper and chomp on the go, holding your head up high because it’s only 9 am and you’re already a champion. 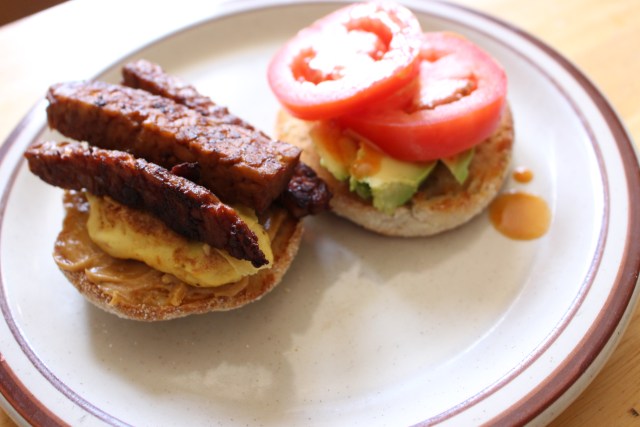 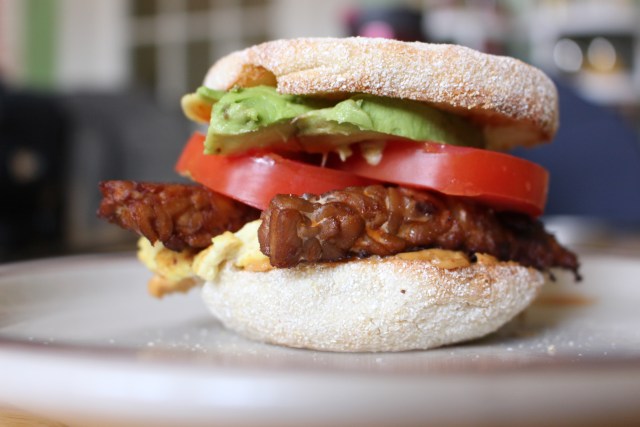 And its cousin, the slightly more filling breakfast bagel made with vegan cream cheese, tempeh, avocado, tomato and cucumber, for good measure. 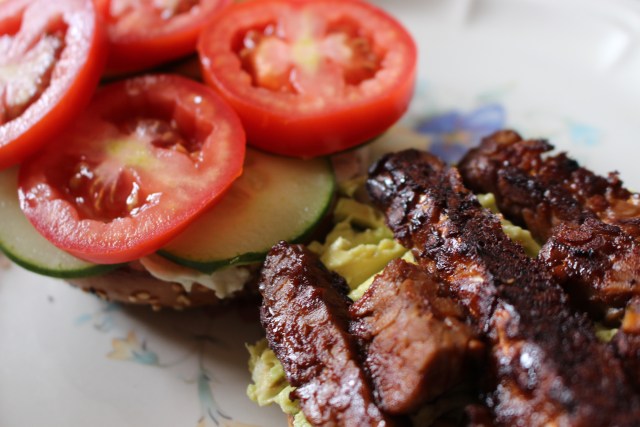 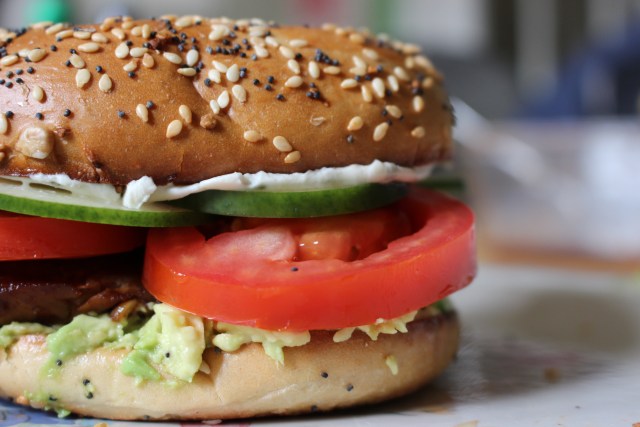