With Nerd Culture at its peak and gamer guy gatekeepers out in full force, Mythic Quest could have been a very different show. But instead of focusing on/encouraging the tendency for toxicity in the video game community, it chose to lean into the direction gaming is going, putting women (specifically women of color) at the controller, including queer women.

Speaking of the queer women, Season Two started with Rachel and Dana taking the leap from work crushes to real girlfriends, and they spend the season being cute together while also having their own separate storylines, which is incredibly refreshing.

Over the course of the season, Rachel and Dana do hit a little rough patch, with Rachel being worried she doesn’t know Dana as well as she thought, and Dana admitting she realized she wants to be a coder and applied to a program at Berkeley. But they decide they’ll work through it together, because they’re adorable gamer girlfriends and distance can’t keep them apart. 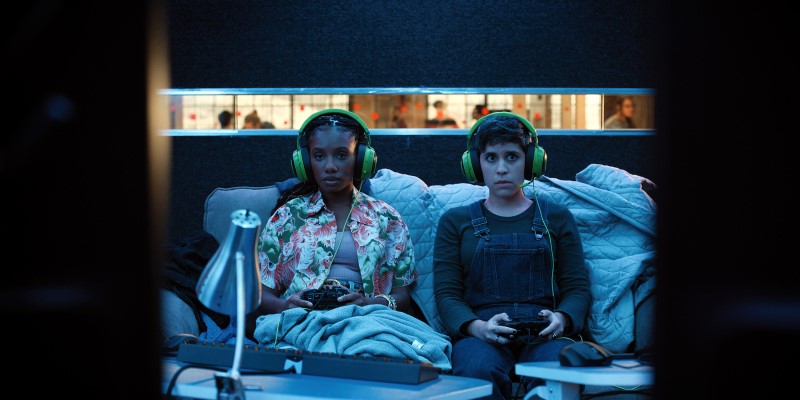 I know they don’t look happy here but I swear they were.

Eventually, Rachel realizes she wants to be a writer, and also applies to a program at Berkeley, which she’s afraid will seem like stalking but she promises it just happened to be the best program for her. Dana is thrilled until she finds out that she actually didn’t get into the program, but Rachel got into hers. But Dana assures Rachel that even though the person leaving is different, the idea stays the same: Distance can’t keep them apart. The last time we see these two this season is them smiling mischievously at each other as they decide to break the rules and have sex in the office before Rachel heads off to school.

The show overall is full of funny bits and running jokes, and even though most of the characters are extremely selfish and low-key suck most of the time, it has a lot of heart. It touches on subjects like race and toxic masculinity and mental health while also having conflicts ranging from cartoonish villains to reliable interpersonal issues. It has running jokes, and even as a little subtle Easter Egg, shows clips from Ashly Burch’s video game Horizon Zero Dawn sprinkled in.

This show reminded me a little of shows like Arrested Development or Community, where sometimes it’s hard to root for the main characters because they’re absolutely wrong, but for some reason you can’t help it. Everyone is charming in their own way, and even though Naomi Ekperigin’s Carol, the exasperated HR manager, is the most relatable character, you can’t help but hope they all find their way. I even found myself glad C.W. got his happy ending, though his Backstory episode did little to endear me to him.

The season ended with a bit of finality, and as far as I can tell there are no immediate plans for a Season Three. And when it comes to our gay gamers, that’s fine with me. They have their happily ever after, and maybe someday they’ll make a gay video game together, once Dana learns to code and Rachel learns to write. Because the future of gaming, both on screen and behind the scenes, is queer as fuck.