It is that wonderful time of the week again, where I get to update you on the Gay Happenings on The Morning Show!

The TMS team is in Las Vegas for the presidential debate! As you might recall, last week there was a lot of “who is going to moderate the debate” drama and machinations happening. It was decided that Alex would be representing the TMS family as moderator, and this week we learn that Bradley will be doing the pre and post debate analysis. Other important goings on: Cory is trying to figure out who is planting sordid stories about Hannah, the staffer that died last season, and stop them from being published. As ever, The Morning Show bravely asks why have two plots when you can have four thousand??

The UBA jet to Vegas is filled with our usual suspects, Alex, (having some sort of back pain that I imagine the writers think is a metaphor for the guilt she feels) Chip (Mark Duplass, in a performance that is the answer to “what if you anthropomorphized a pile of wet towels?”) and Bradley. And who is Bradley chatting with so comfortably? 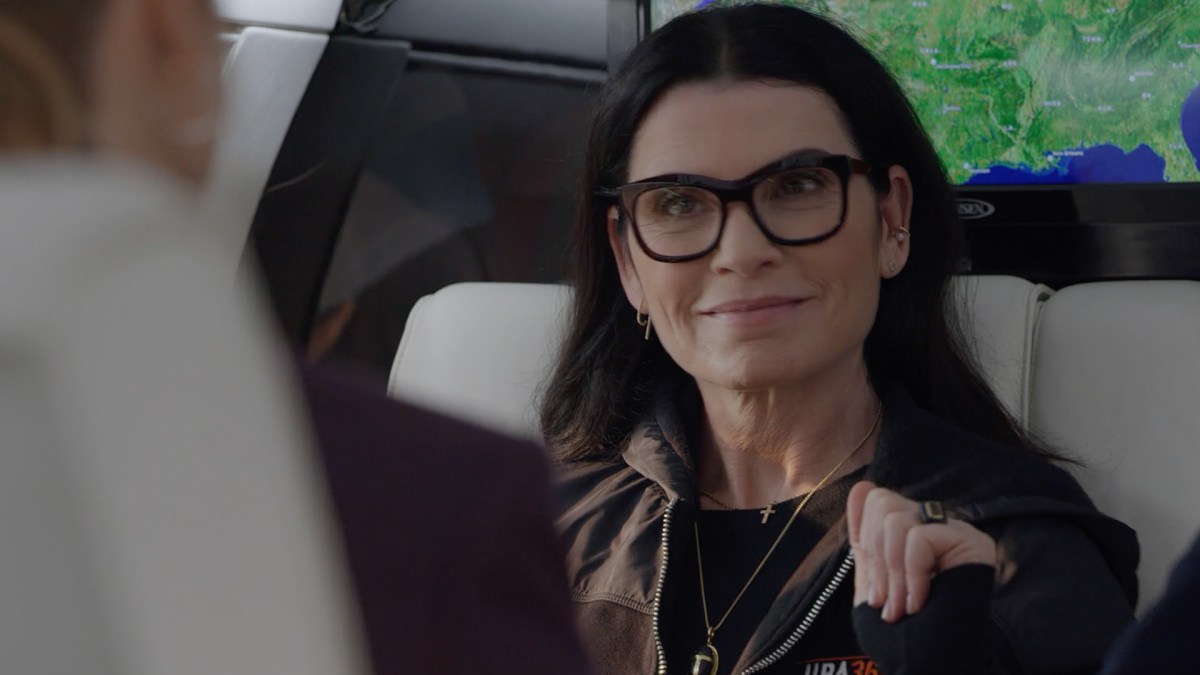 “Yes, Chasten and I’s duet of Paradise by the Dashboard Light is still talked about in the community.”

It’s her girlfriend, (I guess???) Laura Peterson! Apparently Bradley’s gift card and desperate stoop hug worked wonders, and the twosome are giggling and chatting cozily. Bradley is suspicious but clearly pleased that an interview with Mayor Pete just happened to pop up on Laura’s calendar. “Well we didn’t get to spend Valentine’s Day together, so I miraculously called Mayor Pete, and he miraculously scheduled an interview.” First of all: LOL. Second, the only way I will believe this happened is that Laura literally called Mayor Pete and said “I need a work reason to get on this flight with my new, still closeted girlfriend, are you free for an interview and then drinks after?”

In the meantime Cory’s assistant Kyle is like “hey, do you know who is dating? Bradley Jackson and Laura Peterson!!!” Cory denies this, then immediately learns that the only thing he can do to keep the stories about Hannah being published is to exchange them for a story that is EVEN MORE SALACIOUS. Literally every time this is said they cut to Bradley and or Laura and Bradley, DO YOU GET IT?

There is a lot that happens in between the two scenes we get with our Girlfriends in News and Sex, namely Alex losing her shit and Mitch (Steve Carell) in Italy feeling bad about himself. The latter I care not at all about and I only care about the former because it gives me a reason to share this image of Marcia Gay Harden smirking. 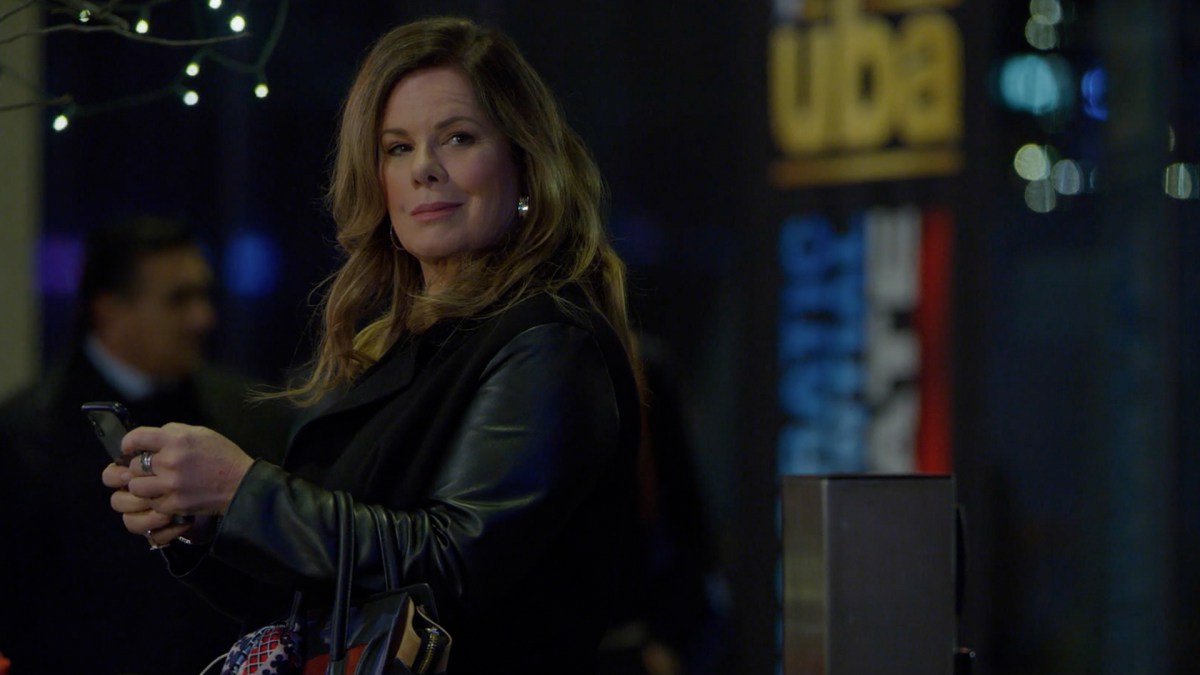 Be prepared for me to use this as a reaction photo for the rest of my life.

She is “Maggie Brener” a Maureen Dowd slash Rebecca Traister type who is writing a dishy tell all book about TMS. Alex is terrified that this book will expose her for being…the person that she is, so when she sees Maggie outside her hotel in Vegas, she hides. Maggie clocks this and smirks, I give her a standing ovation. Alex will, later in this episode, confront Maggie in her hotel room in a very bonkers scene that has to be seen to believed. Unfortunately it does not get gay (THOUGH THERE ARE MANY OPPORTUNITIES FOR IT TO DO SO) so let us move on to the Girlfriends in News and Sex scene. 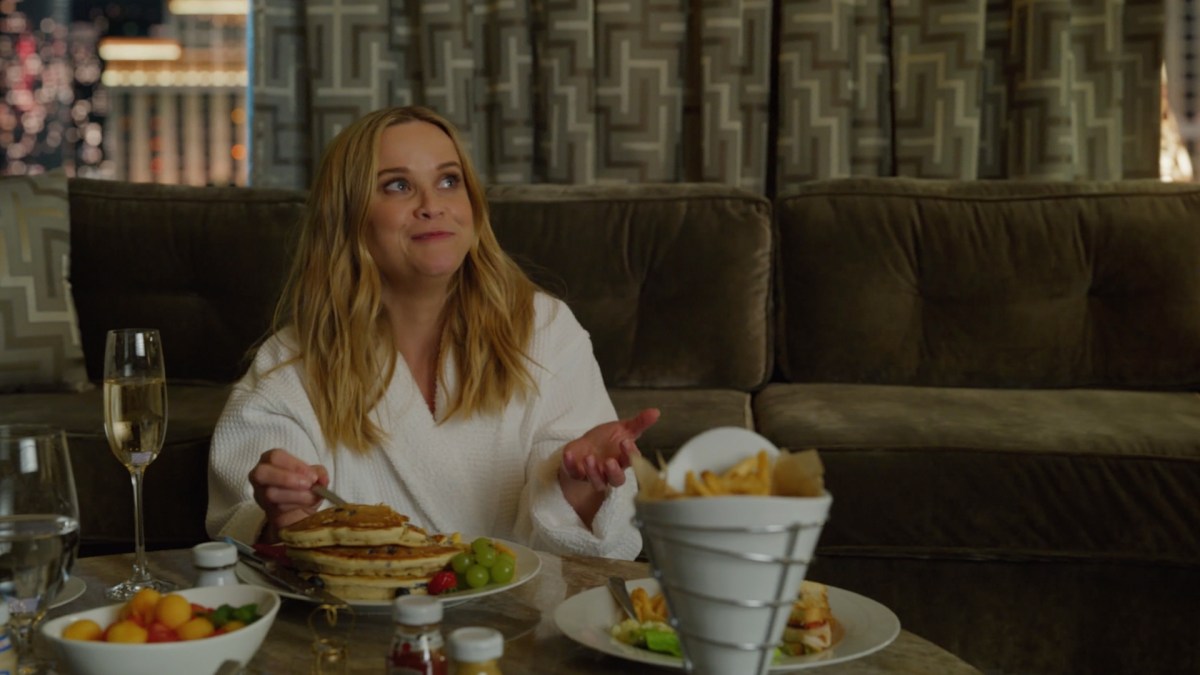 A still of a woman having SO MUCH FUN!!!

“I AM HAVING SO MUCH FUN!” Bradley yells from the floor where she is sitting (gay) and eating a plate of waffles. Laura laughs smugly from the adjoining bedroom doorway, clad in a gorgeous set of PJs. Thank god Bradley did not have to moderate the debate, imagine having to work instead of having sex and eating waffles? She does feel kind of bad for Alex though, because she is clearly having the worst time. “Don’t.” Laura says darkly, refilling her champagne. WELL. Much like myself, Bradley is like okay, you can’t just SAY that and not spill the goods, come on! Get to to spilling!

The goods are these. (I said that in the cadence of the narrator in Pushing Daisies, just to be clear.) Laura was anchoring at YDA, (a competing network where Mindy Kailing works) and doing very well when Alex came into town and started hanging with Laura and her friends. She learned that Laura was a lesbian, and not too long after Alex found out…YDA found out and fired Laura. Bradley is SHOCKED by this, which is amusing, considering how shitty Alex has been to her…forever? Of course, Laura can’t prove it was Alex and never really cared to find out, but the thing she can’t shake is much smaller than that. Sometime after she was fired, she saw Alex on the street, walking in her direction. “She saw me…and looked away, and crossed the street so she wouldn’t have to run into me. I never forgot that…and I never will.” 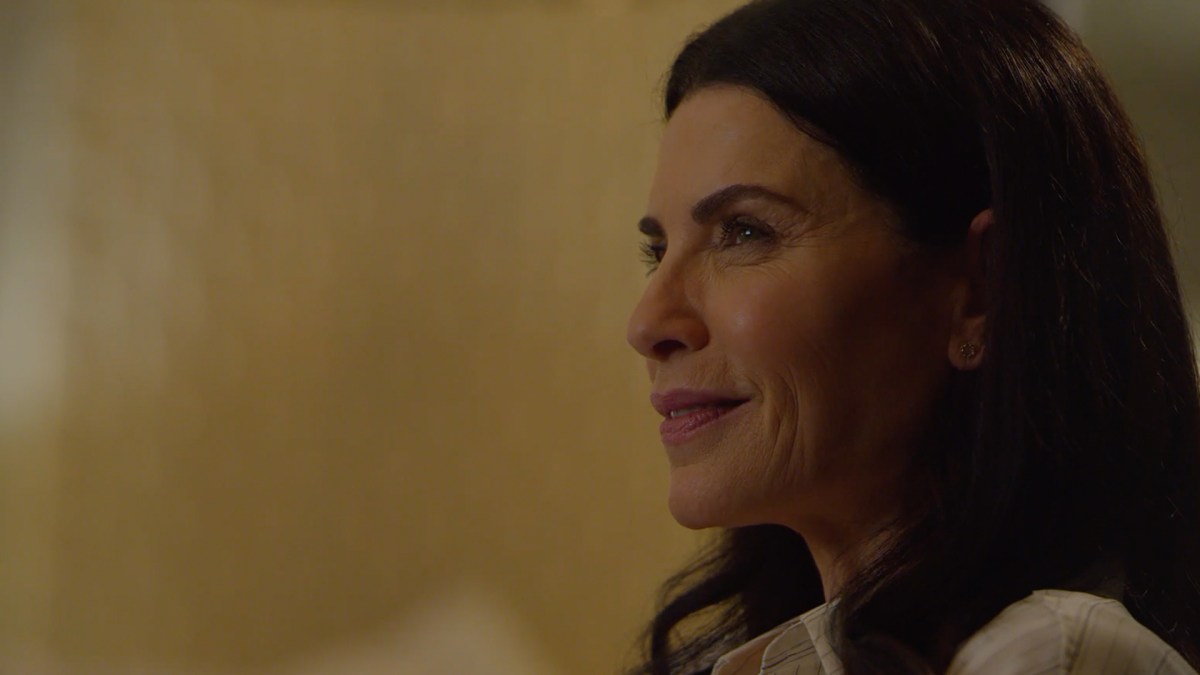 It is another shocking moment of….decent writing! If Alex did tell the network Laura was a lesbian and effectively ruin her career, of course that is the demonstrably worse thing. But that’s never the stuff that sticks, is it? No, it’s the little things, like being ignored on the street by someone you thought was a friend, that’s what festers. Bradley asks if Laura ever talked to Alex about it, but because Laura is a grown up lesbian with good boundaries, she decided that the chaos that surrounds Alex was not something she wanted to be a part of. I truly did not know that the writers of The Morning Show were capable of writing a well adjusted person, but I am thrilled by this lesbian representation! 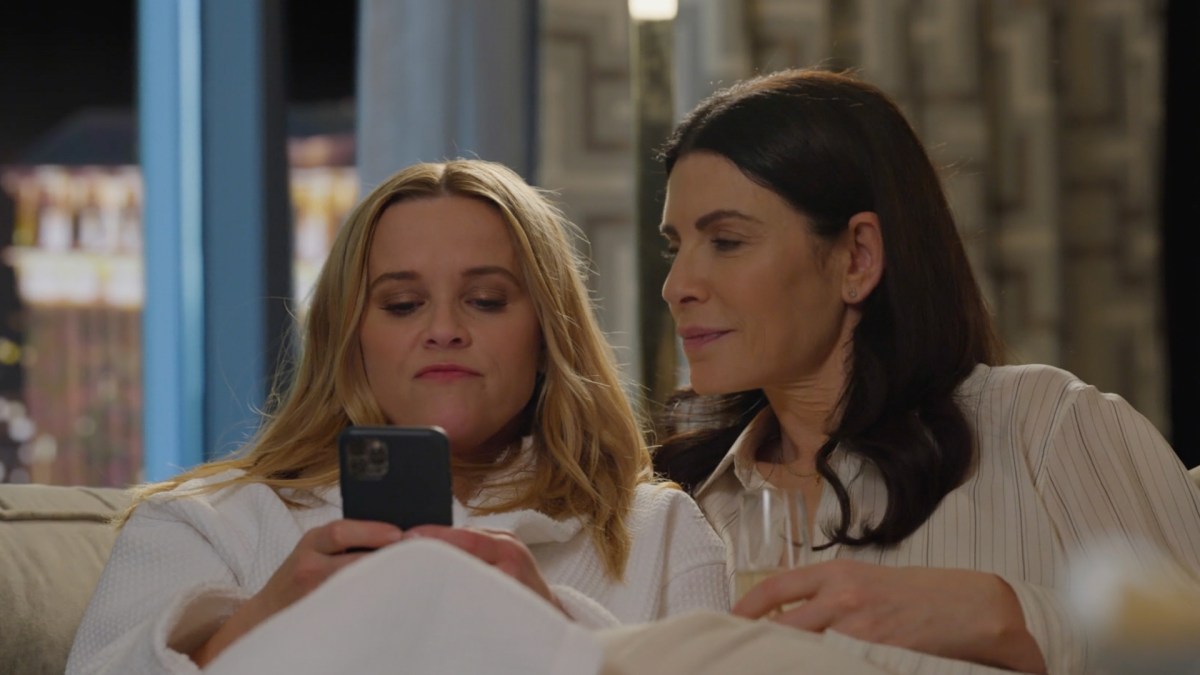 “Babe, stop checking your mentions, everyone is just glad you ditched the wig.”

Their couch cuddle is interrupted by a text from Cory, who wants to know why she didn’t pick up his call. It takes her like, three thousand years to get that he called her hotel room and not her cell, and of course she is not in her room, she is in Laura’s room for sex and waffles. Laura hints that he likes Bradley (he does) and rolls her eyes as she goes off to refill her champagne. Cory says he is calling for a morality check in, but what he is TECHNICALLY asking for is tacit permission to leak that Bradley and Laura are dating in effort to squash the bad press about Hannah. Laura returns just in time to say “Hi, this is so Cory can hear my voice and confirm that we are dating for plot reasons.” We are treated to an image of Cory looking shocked and wounded.

Bradley emphatically agrees that he should do whatever he can to keep Hannah out of the press, but of course doesn’t know that the story is..about her. That is all we get from our Girlfriends in News and Sex this week, so let’s talk about the elephant in the room, the elephant named “Chemistry,” shall we?

I am not particularly interested in the orientations of actors who play queer characters, personally. Most of time, I find bad writing and characterization the bigger issue when it comes to believing the portrayal of queerness on screen, and frankly, I believe in my heart of hearts that…many actors are a little gayer than we think. Julianna Margulies certainly is, per her Variety interview earlier this week.

And look, I love Reese Witherspoon! she is a National Treasure, she is charming and delightful and she is the reason we have an incredible Gone Girl movie, but…honestly, she might be the straightest woman alive? She cannot help but bring a “we’re just two gals at a sleepover” energy to every scene she and Julianna share, and it is kind of hard to get over. The other thing is, well, it’s The Morning Show. Everything about it is slightly off, so makes sense that this relationship is equally…perplexing. This is a show about many (many) things, but it’s not really about sex, and there aren’t not a lot of scenes where people are expressing sexuality or even sensuality. So not only do we have to contend with the gal pal energy from Reese, we have to contend with the show itself not being super comfortable depicting adult relationships. I don’t really have, a greater point to make here, I just wanted to get that on the record. As over the moon as I am for this silly show, I’m not like, actually blind to it’s faults.

As ever, I will be here to update you and guide you through any and all gay moments that happen this season! And if you like, you can read my old school, Television Without Pity style recaps via my (free) newsletter, Chaos! It’s The New Cocaine! where I am bravely recapping every episode in painstaking detail, yes, even the straight stuff.

Christina has written 171 articles for us.