After a long, circuitous, and heartbreaking journey, it appears that DADT is finally ending — with more of a whimper than a bang. Although two House Republicans made an attempt to delay proceedings earlier last week because of ‘unresolved paperwork problems,’ they didn’t succeed. DADT is now generally agreed to be ending as scheduled this Tuesday, September 20. Given the fervor and publicity of the events leading up to this moment — protests, arrests, people chained to fences, people worried about the possibility of violence in the ranks — it seems to be passing without much notice. CNN reports that “so far, no plans for any Pentagon ceremonies or events regarding the repeal have been announced.” 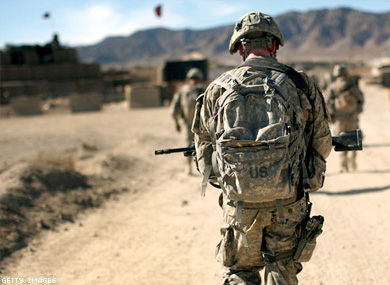 That doesn’t mean changes aren’t afoot; they’re just happening quietly. The Associated Press notes that while celebrations will occur, they’ll be small, personal ones.  Things have been changing in small, personal ways for a while now, ever since it became clear that the repeal was actually on the horizon. From the AP:

A few have since placed photographs of their same-sex partners on their desks and attended military barbecues and softball games with their significant others. In San Diego, about 200 active-duty personnel — both gay and heterosexual — made up the nation’s first military contingency to participate in a Gay Pride march this summer, carrying banners identifying their branches of service. An Army soldier had tears, saying she was touched by the thousands cheering them on, after hiding her identity for so long… Many no doubt will continue to keep their personal lives private. But gay service members say their jobs already feel easier. They no longer use code words or change pronouns in their conversations to protect their careers.

(The repeal of DADT won’t ensure protection for trans* servicemembers, who can be considered medically unfit if diagnosed with gender identity disorder, or if they have had genital surgery. They can be courtmartialed if they are considered to be ‘crossdressing.’)

And the US military is making changes of its own, although they aren’t really being publicized either.  Along with the sensitivity training that’s been required of all servicemembers to acclimate them to the new, post-DADT military, the Navy made another, more personal gesture this week. Melvin Dwork was expelled from the Navy in 1944, in the middle of World War II, when his own boyfriend in the service reported him. He’s now 89. Last month, he was notified that the “undesirable” discharge on his record will finally be changed to “honorable.” Dwork says that because of his “undesirable” discharge, he was unable to draw GI benefits and is now in need of an expensive hearing aid that he might be able to afford if he got the pension he deserved. The Navy has said his benefits will be reinstated retroactively, although it’s not clear whether Dwork will receive back pay for the last 67 years. Since the proceedings to end DADT began, dozens of veterans have stepped forward asking for their records to be corrected; Dwork is the first WWII veteran to achieve it.

Although DADT seems like it’s passing into history largely without fanfare, those who want to mark its end with something have the option of watching the HBO documentary “The Strange History of Don’t Ask, Don’t Tell,” which airs at midnight on Monday and again during prime time on Tuesday. The filmmakers, Fenton Bailey and Randy Barbato, explore the history of the policy, and also interview and spotlight individuals who, like Dwork, have had their lives changed forever by DADT.

In a way, it feels appropriate that DADT should slip out of America’s consciousness without much ceremony. It’s like things are reverting to a place they should have been all along, like waking up from the bad dream where most of America is making gains in terms of employment protections for queers but in one of the hardest and most underappreciated jobs in history, people who risked their lives every day suffered under government-mandated discrimination. But regardless of how much attention it gets, Tuesday’s events are the result of innumerable peoples’ blood, sweat, and tears, and are a way of finally granting people who gave their lives and people who are still willing to do so the honor they deserve. Take a few minutes to pay attention to what happens on Tuesday, and be grateful that there’s one less thing that the people with one of the most stressful jobs on Earth now have to worry about.