In a pastel closet-turned-recording studio, Kaitlin Prest built sonic worlds about queer love, sexuality, gender and the messiness of human connection. From 2013 to 2017, the studio, which Prest called Mermaid Palace, was where she produced The Heart, an award-winning experimental, feminist podcast known for its intimate narratives and theatrical soundscapes. For years, Prest’s room on the fourth floor of her Brooklyn hippie apartment served as her creative refuge. Cardboard mermaid waves rolled across the head of her bed; streams of color sparkled through the windows in the fleeting sunshine. At the wee hours of the night, personal secrets, shrieks and giggles were recorded and massaged into delightful, wrenching snippets of audio magic.

This kind of closeness is what made The Heart and Prest herself so beloved to fans. It introduced a new territory of radio to listeners, namely one that is entirely subjective and lends power to private stories about love, sex and emotion. Her highly moving No series, which explores the blurriness of consent, caught the attention of many listeners during the #MeToo movement. But after five years of producing this kind of personal radio, Prest began to feel creatively stifled. She also noticed the mounting tension between wanting to make artistic experimental radio and needing to appeal to mainstream networks to fund the work.

“When I was younger, I was a little bit more idealist and naïve,” Prest says, “I didn’t see radio as the system, but it is the entertainment industry. Public radio, like progressive white people, have their hearts in the right place, but are failing.” When Prest decided to put the show on hiatus in 2017, she did so in order to realize another dream of hers: building a sustainable platform for herself and other artists to make subversive art with abandon.

So at the end of last year, Prest brought the magic of her closet studio to Los Angeles and launched an audio company of her own. Mermaid Palace brings together artists, writers and producers to make podcasts, performance, television and beyond, all with a social-justice mission to put queer and feminist stories onto the airwaves. Now housed in a small office in East Hollywood in Los Angeles, the company is run not so much like a corporation, but rather in the manner of a theatre or dance company, where a commitment to radical politics is at the center of their work. 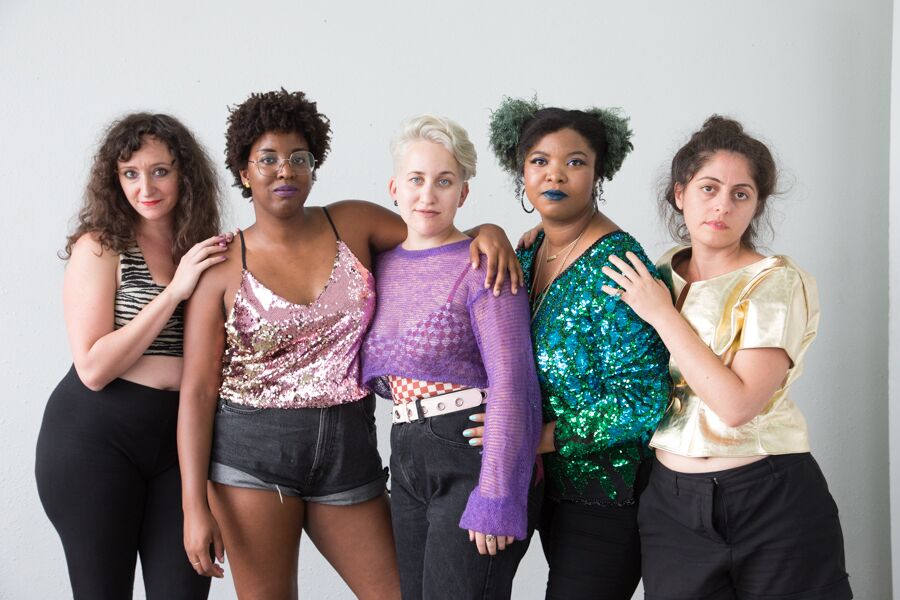 Central to the formation of Mermaid Palace was bringing back The Heart. Only Prest knew it was time to hand off her labor of love to another generation of queer audio artists, acknowledging that her privilege as a largely “straight passing, white bisexual” meant that she needed to take on a different role. A decade ago, shows like WNYC’s Nancy or the raunchy roundtable discussion Food for Thot, would never have been put on air. You would be hard pressed to find a radio story about queer life that wasn’t reductive and simplistic, where queers were the narrators of their own tales instead of objects of inquiry. But in 2020, the radio landscape has changed, and The Heart required new blood.

Enter: Nicole Kelly and Phoebe Unter, two Los Angeles-based audio rebels who left an impression on Prest with their audio project bitchface. The show’s raw, pulpy sounds and manifesto-influenced, irreverent scripts were exactly what Prest wanted. Accordingly, the new iteration of The Heart uses experimental narrative to tackle everything from the joys and limitations of lesbian separatism to healing intergenerational trauma and inserting pleasure into politics — often through the lens of race. The first episode, “Lesbian Separatism is Inevitable,” was released on Radiotopia last week, and new mini-series will be released over the course of the year.

Much like Prest, Kelly and Unter don’t wish to cater to mainstream audiences. Instead, Kelly says, they want their listeners to keep up. “We’re inviting audiences to rise up to our level,” she says. For Unter, queer podcasting means “expanding the potential ways people can see themselves,” and bitchface aggressively challenges the status quo. As a listener, myself, who first met Kelly and Unter at a bitchface live taping, I have been challenged to rethink (and process!) my own normative relationships with friends, lovers, exes and everyone in-between.

The style of the new Heart deviates from its original form and from the clean, public radio sound to which many podcast listeners are accustomed — instead, imagine an oozing volcano of punk-infused feminist hauntings and awakenings in your headphones. Not only does the show bring the queer imaginary to the forefront but it uses vulnerability artistically to push for an explicit political and cultural agenda. For Kelly and Unter, this has meant putting their personal narratives on the line.

Kelly says that creating The Heart and bitchface has not merely been an artistic pursuit, but a personal practice of the politics she wants to see in the world. “I think we have to learn to be vulnerable with each other and learn to build real intimacy in order to build movements and mass change,” she says. Her mini-series “Divesting from People Pleasing” delves into Kelly’s journey as a Black woman growing up in predominantly white spaces, and how she learns and unlearns to make herself palatable to white people. This vulnerability, she believes, is just one step in moving towards collective liberation.

Unter agrees that Mermaid Palace’s work is “revolutionary” in the radio world in that it gives artists the chance to share and confront their most difficult moments. Her own mini-series, “Race Traitor” grapples with whiteness and the possibilities and limits of white ‘anti-racist’ work. Another Mermaid Palace series by Drew Denny, “Asking for it”, which will be released in February, examines intimate partner violence in queer relationships.

Lillian Kalish is a reporter and poet currently based in London.

Lillian has written 2 articles for us.